Well, I did manage to finish off the Stoetzal Cottage build that I'd started last week.
There wasn't a lot I could do to this model to make it different from those of everyone else. The files don't allow any image manipulation (from someone with my techy skills at least.!).
The model itself has a footprint of 7"x7" and the height to the roof ridge is about7" too.
One of the features of all Stoetzal buildings, as far as I can tell is the "step" that appears (or rather doesn't) at entrances.


As all the walls, floors etc. are designed for 5mm foamboard it does mean that door 'float' 5mm above ground level - a feature I'm not particularly fond of.
To cure this is an easy enough task (as can be seen in the photograph above) by adding one's own step. I had originally intended to incorporate the step into the base foamboard, but tiredness ended up with me cutting the wrong bit!.
The fix was simple enough, I cut a separate piece of foamboard to a suitable size, and with minimal modelling
The finished 'step' piece can be seen below:

The 'step' was painted very quickly before glueing onto the front wall and base (using the 'tag for extra support') and although it appears grey, I only used browns and sandy colours with a dark brown wash to get the effect I wanted. 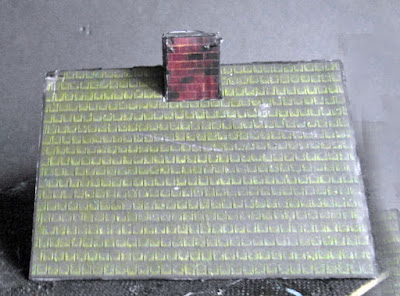 The roof was probably the most difficult to assemble even though it was a mere two parts glued together, but luckily the two parts meet at about 90 degrees making the use of foamboard pieces at right angles fairly simple.
The chimney though for the cottage is one piece and if using a 'lift-off; roof makes the positioning of it important.
I decided to cut the chimney into two parts, with the upper part attached to the roof (giving it greater strength) and the lower part, being shorter, making it easier to move figures inside the building. 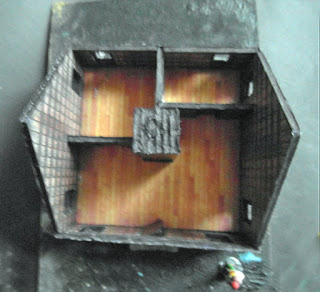 The photograph on the right shows he model from above (without the roof - duh!).
All internal walls are rabbeted into other walls or the chimney breast; the latter having been cut down to allow the easier roof removal as mentioned above and also making it less likely that the building will be knocked about ( I guess).
Whilst I didn't have any of the three doors (two internal and one external-) open-able. Whilst it's an admirable feature of model buildings, I've never had the need in any of the games I've played.or seen. 'Glazed' windows on the other hand do make a building look 'lived in', I think many appear Ghost -like without ! Clear plastic pieces glued between the foamboard and the outer paper skin is a quick fix and well worth doing imo.

So what about internal detailing ? Well, that's for another time and another post (probably next week) and as I 'll be using my recent furniture purchases will simply be a matter of opening the blister packs, placing them and photographing them

Overall I'm pleased with the model, it's simple and useful over many eras, 17th -18th century onwards and I can see it being used in my pirate games (now that I've just about got the rules to the state I want them)

That's it then, once more, for another week and as always, your comments are both welcomed and appreciated.
Posted by Zabadak at 04:48