This last weekend has seen me make inroads into another building, a Stoezel' Cottage, probably the simplest of the many models he makes.
Progress was slow simply because it took  more time than I had imagined to get prepared for it. Finding new scalpel blades,glue etc. and even just locating my cutting board all became unwelcome hindrances.
I was hoping to finish this off in an afternoon but, as always, real-life had to interfere with far more problems than I envisaged. 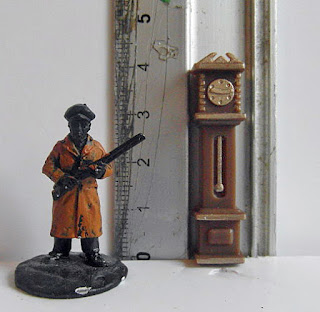 Nevertheless progress has been made and once I've found another felt-tip I reckon I can finish this off in another two or three one-hour sessions (all I can manage at the moment).
One of the reasons why I'd have liked to have finished the above Stoetzel's Cottage is that it would have been the ideal setting to show off the new furniture that I've bought.
Sid went missing for the first photoshoot so a random gangster figure that was on hand, was recruited into the role.
The photograph has a ruler also which I don't normally do, but was at the request of my good friend "Captain Jack" (no blog but he can be found on FB)  who was intrigued by the furniture (- listed as 1/48 scale and imo fits perfectly with 28mm figures.)  and wanted  Grandfather Clock
The Grandfather Clock was only one item amongst many, most of the bits fitting somewhere time wise, interwar, but obviously usable in a great many other periods too! 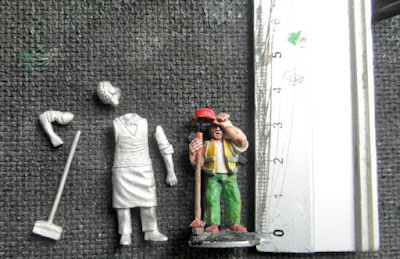 Scale-wise I think these fit really well and I'm very pleased with them, much more so than the sample multipart 1/43rd scale shop assistant. As can be seen in the photograph, he's a giant compared to the "28mm" (ahem) figure of Sid alongside him!
It was a big disappointment as there were at least another 50 or so civilians that looked ideal for a Gangster era game.
In the catalogue of 1/43 goodness I'd also thought that I'd found a very useful figure for a fellow blogger but alas the size of the figure ends that particular line of though. (On the good news front though, I have found, what I consider to be just what he is looking for!)

That's it for this week, I'll hopefully finish the cottage this week and post about it next week, again showing off some of my new purchased furniture.

As always your comments are both welcomed and appreciated.
Posted by Zabadak at 05:02