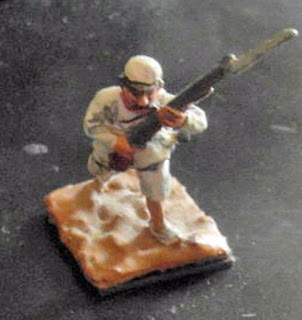 I was a bit stumped this week (as usual) bout what to post about and I'd decided to do an 'audit' on my pirate figures collection.
Whilst I didn't really need to know how many musket-armed or sword(cutlass) armed figures I had, it would give me something else to post about and another chance to take some photographs of the whole collection.
Or so I thought !
I did start sorting through the two boxes of pirates that I posted about last week when I once more came across the Sepoy that I should have put with the others mutineers.
It was returning him to his rightful place in one of the drawers of a steel office filing cabinet) that I came across the following figures (see photograph below) 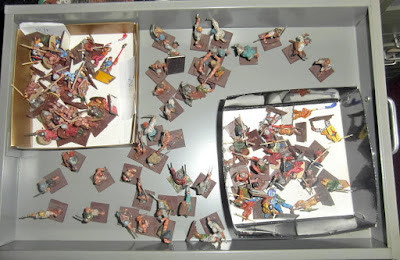 The drawers aren't all labelled so it was a process of just going through the unlabelled ones until the correct one was found.
It came as a bit of a surprise to find yet more pirates.
They're painted but haven't had their bases finished (the other two boxes contain Celts/ancient Brits or some such that were to face my Romans though I can't ever see that happening)


So what was the results of this find ? The photographs reveal all:
The women are very 'butch' looking (not that I'm bothered) and they're a cut above the other flimsily dressed  types (of which I also have a few). I have no idea of the manufacturer, but they do look like they're all from the same one.
So yet another 35 figures to add to the mix which means I've roughly painted (in both senses of the word) about 200 figures and have based all but these 35. All I have to do now is figure out how I originally based the majority  and try to match these up (one day).
Whilst sorting through the others I came across even more peg-legs (or single legged types) to add to the original three (the three in the centre of the photograph above) making a total of seven altogether! I do wonder if they're as prolific as they're made out to be and it seems that every manufacturer of "pirates" seems to find it necessary to have a 'peg leg', not that I'm complaining,merely commenting.
I also discovered that the Wargames Foundry version of  Long John Silver is the third figure from the left in the above photograph, which prompted me to search for both Ben Gunne (sp?) and Jim Hawkins, being the only two others from the 'Treasure Island' pack that I could recollect.

So that's it then for this week - another thirty-five pirates to add to the mix, even if there is still a bit of basing to be done and all because of a misplaced Sepoy!

Thanks once more for visiting and as always your comments are both welcomed and appreciated.