The Bucket Brigade and Others (Pirates 4)

Continuing with my posts about my pirates this week I've sorted through the not-so-vast number of supernumeraries of my collection, the gun crew and a few others of note.
When I made my ships I did design them to be figure friendly, so that gun-ports were spaced sufficiently apart to allow for a figure  to stand on either side of the  model cannons.
I had allowed for three gunners per gun and have various figures that are obviously only intended as gunners, so there are figures carrying cannon balls, with rammers, powder ladles and so on, both in action (ramming) and idle poses. Needless to say I haven't enough gunner figures to man all my guns, but I feel do have enough for my purposes.
Along with the more or less unarmed gunners I also have various chaps that can also serve as gun-crew, such as the two figures on the right pulling on ropes. They can of course just serve as generic crew (also known as cannon fodder), but they're obviously not as 'exiciting' as some of the more dynamic cutlass wielding curmudgeons available.
I place the two figures below in the same category as the two rope-pullers, in that they're 'nice' but hardly anything more than eye candy (maybe not so much with my brushwork)
I seem to have a lot of these figures that are 'nice' to have but wouldn't be anyone's first choice, the two figures with boat-hooks,  on the left perhaps well illustrating the point. They're nice enough figures and it's obvious as to what their purpose is. They're a bit awkward for a busy deck with their boat-hooks as long as they are, but they could have a bit of  future serving as dockside workers.
The next pair of figures really do look like a pair of fish out of water until they take up their rightful place behind a ship's wheel, as they're both 'Helmsmen'. It's obvious that every ship with a ship's wheel needs one of these chaps, so although they look awkward when not at the helm they're a bit of a necessity I guess.
At a pinch they could be used as an audience for the two musicians above. I've a similar opinion of the two lookouts below; they're needed but look out of context anywhere other than as lookouts. It's even further strange that they're pointing forward (presumably) whilst shouting rear-ward!
It took me quite a while to figure out what the purpose of these five rapscallions  was exactly.
I did work out eventually that they were also gunners, but were intended for the swivel guns that I don't have! (But I did intend to get some - honest injun guv)

Just in case you were wondering why this post was entitled "The Bucket Brigade", well here they are, men carrying buckets, just the four of them (probably three too many).
They look OK and could be used both as crew (and more importantly to me ) and civilians, carrying the many types of stuff carried in buckets. 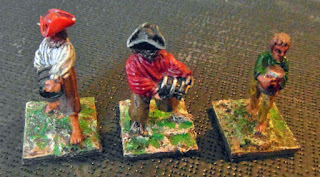 Along with the bucket brigade comes the barreleers (that's a word - right ?) and all I've said about the bucketeers (that sounds a bit more 'piratey' - right?) can be applied to these . They look OK  gun crew with barrels of gunpowder, but could just as easily double as civilians lugging about barrels of rum in a tavern.

So that's it once more for another week and once more I haven't done anything over the last week, I'll be posting more about my pirates next week (sorry).

It remains for me to welcome a new follower to both my blogs (this one and my Gladiator blog - in case you'd forgotten), so "Welcome", Michal Kucharski, (whom I can't find a blog for), I hope you and the other visitors to my blogs find something of interest.