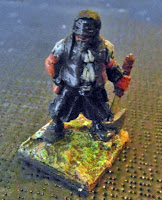 So although I've shown most of my pirate collection, here's a few of the figures that have either been missed or didn't easily fall into any of my 'categories', hence the first photograph of an executioner complete with impractical axe. I believe the figure is from the Foundry range but alas  why I cannot say. I suppose there must have been someone that had their head lopped off in the golden age of piracy but most pirates were hanged and gibbeted for their crimes.
Next up is one of many axe-armed piratical types that I have (Foundry must have been doing a special deal on them).
The figures themselves are highly usable of course, both as pirates and civilians and come in two distinct varieties, those attacking and those looking like they may attack.
I don't believe I have any other pirate figures, other than the foundry ones that are axe-armed.
I singled out the chap on the left for his gnome-like (or dwarfish) qualities as an example of my axe-wielders (I do have another three that appeared in an earlier post)

Amongst the other I have a few civilian types of which these three on the left are examples (yes, it's a poor photograph - I know).
The two individual on the left are probably 'named' characters from Foundry whilst the chap on the right is a captive. I've included him once more in the photograph below, for scale purposes. 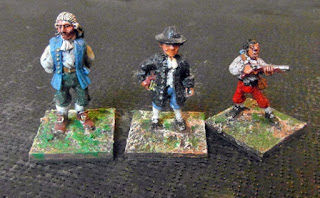 The photograph on the right (with camera- hogging captive for scale) shows a very small preacher-type and an even smaller firearm (large pistol?) armed cabin boy (Jack Hawkins ?). The two are truly diminutive as can easily be seen, but they'll probably be used as they are. 'Jack' is either carrying a large pistol or a small musket-type carbine. Anyone who has handled a horse-pistol of the era will know how heavy these things can be. Such a small chap using one two-handed is a good representation imo.
The four figures on the left are all 'grenadoe' armed, I'm guessing the throwing stance is unavoidable. Grenades must have been quite unusual terror weapons probably for both the recipient and the user.
To complete this post here's yet another figure I came across with the dreaded "chest foot":


The overall audit of my pirate collection was quite surprising, I knew I had quite a few (meaning well over 100) but here's the final count in loose categories:
Gunners -26; Muskets etc.-74; Melee armed - 97; "Grenadiers" - 4; Others - 54; Unfinished bases (various) - 35 making for a total of 290! I think have overdone it a bit and next week I'll be posting about their opposition, just the single post though and dependant upon whether or not I find them!

In other news, I discovered that my latest follower. Michal Kucharski has a blog that can be found HERE  - it's an interesting mix of various genres (and his painting is superb). It's well worth a look .

I'll also take this opportunity to apologise to those whose blogs I normally leave comment. Real life has raised its ugly head once more, in various guises, which along with the normal round of new and old health issues, there has also been a family bereavement.

As usual your comments are both welcomed and appreciated.
Posted by Zabadak at 07:20