Unfortunately last week I was unable to work on my MDF factory building for more than a couple of sessions as real-life once more intervened and a long weekend away was the order of the day.
Nevertheless I did manage to maintain some enthusiasm for this project and worked a couple of extra hours in an effort to not lag too far behind from my target of "an hour a day" on my wargaming projects. I've also managed to fall behind on perusing and commenting on other blogs and will have to make an effort to "keep up".
The first order of business was to undercoat the building, pretty easy using a cheap grey spray (Paoundlandbargainworld special)., or so I thought.  After the initial coating the model  needed a second coat as I'd forgotten how much MDF likes to soak up paint. 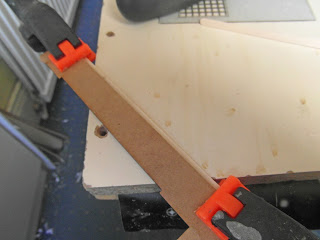 Whilst awaiting the spray to try I turned my attention to the inside walls of the building, namely the four card inserts with their laser-cut 'detailing', namely the windows and doors. I wanted to make a little more effort with this detailing and to continue adding a few more features to make this more of my own take. I'd therefore need to split a lot more coffee stirrers(to get slimmer pieces). This is of course a thankless task and card strips would have been an equally good solution and probably a lot simpler.   A straight edge, two clamps to keep the stirrers in place, a cut across the corner of a board (else the clamps get in the way) and a bit of patience is all that needed to get a lot of split stirrers, some of which are actually usable as is. I do this all by eye and consequently get a lot of very slightly different thicknesses of stirrer and some very uneven cuts - I'm sure card wouldn't be as difficult. Some filing and sorting of different widths later I had enough bits to get on with cutting and gluing the various bits in place.
As the large doors required a little more effort, due to their diagonal cuts, so  I worked on these first. The windows were the next to consider. I really wanted to have some perspex in them to represent glass and had to decide which wall these would be placed on - inside or outside facing ?
I plumped for the inside and realised that once the perspex was in place there would be no was to paint the frame parts, so consequently the frames had to painted first. Although it's not immediately obvious the window-pane frames have all been painted in the photographs, the colour I opted for being very close (but not quite) to the colour of the card being used and having to have an additional coat because, like MDF the card used likes  to soak up paint. The inside will have simple frames to hide the edges of the perspex I use. and whilst the nine individual windows and the two doors each had perspex cut to fit, the two long strips of strips each had a single piece of perspex. The latter will not be so obvious once a few bit of frame are added.
I was a bit unhappy with the very obvious corner 'joins' that I find the most obvious clue to a model being MDF and their least attractive feature in my view.
So, like the stairs, I hid these behind a folded strip of paper and luckily where the stairs met the building there was enough of a gap to slide the paper in.

As time was really against me I finished off this week's work with a quick splash of colour on the outside that would be the base colour . Unfortunately the photographs don't really show the true base colour as it's coffee coloured, but this won't matter much when the lighter sandy tones are added.
The current true colour of the model is probably somewhere between the two.


You can just about see that there is a band of colour round the inside top of the building as this is the parapet above the roof and is outside. The inside walls of the building have all be left with just their undercoat for the moment.
This week's plan is to finish off the framing, inside and out, now that the perspex is in place and, time permitting, getting some paint on the stairs and ventilation stack (which I'm now unhappy with btw).
All of which will leave the middle floor and roof to consider, both of which have their own 'quirks' to circumvent.
A final note, I'm sure that many of you, either those that have this model or something similar, will be wondering why it take me so long to just put together such a simple build even considering the bits I've added. Well, the simple answer is  I don't really enjoy making models, whether they be kits or simply gluing on arms a legs to a plastic figure and I really don't  painting them either!
The only enjoyment  I get from this sort of task is when they're finished and the implied promise that I may get to play with them.

That's it then for another week with the hope that it does generate some interest and that there will be some more progress next week.
Posted by Zabadak at 06:55