Continuing with the ongoing saga of my MDF Factory Building and prompted by Colgar6 (see last
week's post's comments). I too wondered why it was taking me so long to complete despite my dedicating at least an hour a day. In an effort to finish this build once and for all, I bit the bullet and doubled my effort to at least 2 hours a day and knowing I had yet another hospital appointment this last week, on one day I managed a full six hours, be though it in two shifts.
Despite all my effort though I did run out of time (and to be fair, enthusiasm too).
Whilst I'm by no means a perfectionist as you have probably noticed by my painting skills (- or lack thereof) but I do like a building to have some semblance of reality.
So the first problem I needed to tackle in the 'race' to finish was the middle floor. As can be seen in  the photograph to the left, it is neither completely rectangular not whole.
The two extra 'bits on the long side (each sticking proud by approximately 1mm) are the supports for the floor! The intention is being that they will sit on the slots cut into the inner wall inserts.
The hole however would have has no use  in a real building, it's not for an internal staircase but as far as I can tell it to enable the gamer to insert his finger and remove the inner floor. - great if you don't mind less space for figures to stand and maybe the occasional one falling through the hole. It also occurred to me that any internal fittings had to accommodate the the angled removal of the floor (to release it from the slots.).
With all of the above in mind, I used the hole insert that came with the kit, scored it to look like the planking of the rest of the floor and glued it back in place. It's not perfect but adequate and will be disguised or hidden by office furniture,

I was actually multi-tasking on several things so,whilst waiting for one thing to dry, I was painting something else.
I decided to go for a colour scheme of blue (as in so many of my builds), a deep greyish-blue for the doors and a lighter blue for the upstairs internal office 'bit'. The frames of the internal windows would be slightly off-white, contrasting slightly with the external ones. The single upper floor door would also be slightly brighter that the the others.
the internal ground floor walls would be the same colour as the the external undercoat (a murky coffee colour).
I carefully drew a line on each of the four internal walls showing where base of the upper floor would be, using the slots as my guide. This line was a very useful guide to where the colour changed from the blue of the upper floors to the coffee colour lower floor.
I could have made the doors on the building openable, but some tim ago I did realised that the upper door would have to open outwards (a rarity on any building in my experience) if it opened inwards the problem of having the removable floor re-emerges, so the upper door would be glued in place, in a closed position. 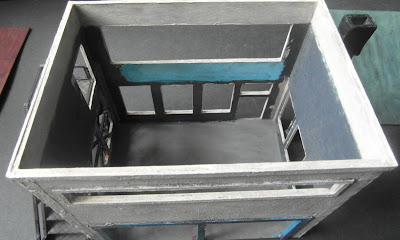 To disguise the two slots as best I could, the inner-sidse of the external walls both had a coating of the blue too.  Though I thought that  this was a very unsatisfactory.solution. I remedied this at a later stage by cutting two inserts from the cardboard scrap from the walls. If the walls had retained the cut-out bits then I would have used them, however they had dropped off  (through?) sometime during production.
The inserts don't fit particularly well, but I do think that they're better that leaving that gaping slot and with a few posters/signs on the walls and a bit of office furniture to distract the eye, they'll hardly be noticeable.
The thinner of the two slots is well hidden by the depth of the larger windows  and only the two end bits are really in evidence.
The large blue door, in the photograph  to the right, has been left in place and is intended to stay that way, whereas the other pair of large doors had come adrift at the unpacking stage of this build and will be glued in place slightly open (probably, possibly, maybe).
The two longer internal walls both had a long strip of MDF, cut from the scrap (I rather liked the two bits I used as to me, they looked a bit more industrial than two plainer  rectangular pieces would) .
I used the bottom edge of where the slot is for reference for gluing them in position.
Throughout this build I've used multiple clamps in an effort to stop the cardboard curling from either glue or paint, mostly to little effect. Once glued and clamped to the external MDFwalls though, this will be assuaged somewhat.


Whilst clamping and gluing was underway on the internal walls,m my attention was drawn to the external parts of the model. The roof had several coats of greys, blues and greens to get a neutral looking colour and similarly the ground floor, though this had brown rather than blue added as well as an off-white sandy colour 'highlight'

The fire escape was given an overall rust-effect treatment then gone over with black, so as not to lose its overall original colour completely. Doors were given their first rust-over too, but not to the same extent and the outside wall were all highlighted with a sandy colour,
Once the inner wall were glued in place the middle floor would drop nicely in place on the two bits of scrap I'd glued in place and the roof would drop onto the upper card edges of the inner walls. (even though the card is only about 1mm thick the roof should be ably supported by them.
After which all that would remain to do was for me to decide the colour of the ventilation stack (and whether or not to remove the 'end piece'; finish off the roof hatch (deciding first if it's going to be openable or not);, glue the remaining three doors in place and I did glue the four inner-wall insets in place. Once all that lot was done then I can do a bit of tarting up (or detailing as some may prefer to say) and it'll be finished ! ^Yay^
I did manage to glue  the two shorter inner wall  to the inside of the building as can be seen in the photograph below

At this stage I though it would be all clear sailing, so to speak, but there was another 'problem', or at least something I wasn't at all happy about.
The inner walls have to sit in the centre of the outer walls and therein lies the problem. Whilst they match up perfectly with the outer walls (door and window frames), they don't go all the way to the edges of the outer walls. The photograph shows the 2mm or so at each side of the inner wall insert that doesn't reach the outer wall

Rather than leave this as it is and just paint out the 'probleml from my view it would be a quick and
dirty solution. To remedy this I'm in the process of making some narrow inserts from the narrower bits cut from the coffee stirrers (what else ?) that I'd used for window frames.
So despite my best efforts to finish the model this week I was still thwarted at the final hurdle and id didn't help that the hospital visit has to be repeated this week too!
So that it's for this week (sorry C6 but it's going to take even longer), but at least, in my mind, I've made a great deal of progress and as there's little left that can go wrong (fingers crossed) I could well have finished this build.

Thanks for taking the time to read through this never ending build process or for just skimming and looking at the pictures and your comments, of course, are always appreciated. At the very least, I  hope you've found something of interest.