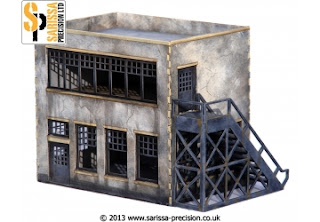 I was very pleased to receive a gift from my wife (and courtesy of #1 son's input) of two models from Sarissa's Industrial range, namely the office building and large factory.
I was told  that the order had been placed on the Monday afternoon and was in my now hands by Friday evening, having been delivered in the morning to my wife's workplace (so the same great service as five year;s ago).
after a quick peruse of the contents of the two boxes it did sit in the 'to do' for a week or so.
However in the last week I have set about assembling the smaller of the two buildings - the Office/Workshop. 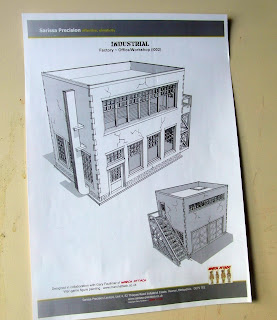 The first thing that struck me was the very useful 'instructions that came with the kit as I can't recollect anything similar in the first kit I'd bought all those years ago.
As it's a fairly small, simple model the sheet provided is merely a double side of A4, but nonetheless, a very useful addition.
I did think putting it together would  be a very swift exercise (save for the time it would take for the glue to set.
The next course of action would be to remove all the pieces from the packaging and  lay out everything in some semblance of order to familiarise myself with the thing and to dry fit the various bits together. I use a door panel from an old kitchen cupboard for this, as it heavy (won't easily move about) and very flat!
The pre-cut pieces were in the most part very easily removed from their supporting boards , but I did take extra care with the very small cut-out in the stair supports.
As I familiarised myself with the pieces I did notice that this was cut from 2mm MDF, my previous model had been 3mm - I guess it's a cost-cutting thing and similarly the inserts (for the windows), as these are now laser cut from card rather than MDF - another cost saving on MDF(and on postage too).

This doesn't really deter from the model overall however and it does mean they're still very good value for money.
I do think though that they could have done a couple of things to easily improve the versatility of the model.
For example, the fact that the model has to built in the orientation given by which I mean I can't have the stairs on the other side of the building as the corner joints don't allow it and it could have been quite easy imo to do so.


The other thing I really don't like about this model is the etched-on 'cracks', mainly because I think they look a little too twee for my tastes though I'm sure others will think otherwise.
On day two I was ready to start assembling the model using Evostick wood glue through.
The stairs were a bit of pain to assemble but I got there in the end (more on that later) and the four walls were quickly glued together, fitting together tightly and securely.
Once assembled I used clamps to ensure the sides of the building  were at 90 degrees to one another and you can just about see  this in the two photographs below. 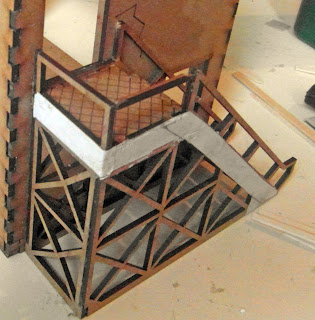 The only course of action was to remedy the this by cutting the bar off one side and re0gkuing it to the other as my efforts to peek the entire side off immediately broke oneof the very thin side rails. I re-glued the side rails and held it in position with small clamps. Luckily, I suppose, the side rail that was inadvertently broken would be up against the building, giving it even more support.

So by day three (I only 'work' or paint about an hour each day btw), I had a a shell of a building and stairs to glue to the wall., which was a simple enugh task. I did note though that the hand-rails jutted out at the bottom about half an inch from the main building wall - another thing to be aware of when manipulating this model.
The stairs also had the very obvious slots and steps showing rather too well  for my liking, so a quick cover-over with some paper cut to zize made for  'cleaner' look, one that I was much happier with.
Looking at this very easy (and quick) renovation had me wondering if I could also 'improve' the look of the model in other areas too.


With that in mind, out came the coffee stirrers, mostly trimmed down to about half their width for door posts, lintels and sills and firmly glued and clamped into place (there was a little trimming afterwards  to do too.).
I did think that I would do something with the 'cracks' but would leave it until I came to painting it.
Because of the way the  model goes together only the front and rear of the building got this treatment, the side windows (three of which were obscured by the stairs), but the roof got a full 'parapet'. 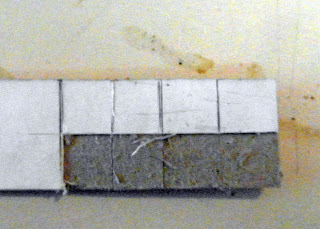 Next up was the ventilation thing that clamped
the side of the building (it only looks like it's leaning away from the builing in this fore-shortened view. It's a very basic being three pices sandwiched together and I knew from my previous experience it would be a pain to paint.
I wanted to things, firstly to hide the sandwich on the side facing outwards and secondly to hide the obvious sandwiched top. I cut a piece of card into four pieces and halved them (as can be seen) from a piece of card, that was glued  around the top, using the 'ledge' created by slicing the card  as support.
Next up I used a pice of offcut (at least I hope it was an off-cut) that was a superb match to the length of this shaft, rounded the end to fit the curved base of the shaft and glued it into place.

Finally to finish the shaft top off I glued a piece of paper around it to hide the very rough joins and then another sliver of paper to form an edge around the top (hardly visible in the photograph)
And that's as far as I got this week with this build, next week I'll be looking at the internal part of the structure, another health and safety issue and the roof.

So that's it then for this week, I hope you're finding this journey into MDFat least a bit interesting.