The factory Office is finished, even after yet another week with a hospital visit, I still managed to finish off the little that remained to be done on this build.
The 'little' in question was mainly the roof, with hatch and affixing the doors that  were still detached.
The roof I'd already painted too, so that should have been a bonus, but I really didn't like the positioning of the hatch. A quick rotation of the roof allowed me to have the hatch in the corner opposite to the door  (a more logical place in my mind).
The 'hatch' however was a different story, the one supplied with the kit was merely a cut out square of MDF and an engraved square within it ! 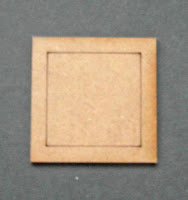 The 'hatch' piece is larger than the hole it covers (why there is one there in the first place baffles me) and I looked for the cut-out piece from the hole to use on top  of the hatch. Alas it was one of those bits of scrap that had fallen from the frame somewhere within the  packing process and not at my end I hasten to add.
Using the hatch as provided as the base for a better overall looking one I cut a  square of MDF from the scrap frames to sit atop the large base.
I rounded the corners of both the top piece and base, added a recess for a handle and fitted some pieces to represent hinges and an handle.
The result can be seen in the photographs below.
I also took the opportunity to give the roof a bit of texture, using PVA and a sprinkling of sand. Colouring would be multiple washes of a lot of different colours and even though it looks very grey in the photographs, it really isn't. The texture can be easily seen in the photograph to the right.

There wasn't that  much to do internally, although I did have to file away a little off two sides of the middle floor to allow the floor to be lifted in and out easily. This in turn led to me having to make an additional two supporting strips to better support the floor.
To me the height of the windows looks odd internally. As can be seen in the photograph, there is little clearance between the floor and the window-sill and not that much room between the top of Sid's head and the ceiling (where the blue  stops above the window).
No holding guns up in the air upstairs !
The large double doors downstairs were glued in place, slightly ajar, as was the single door. And that, more or less was all that had to be completed. (still took me ages though)

Overall I'm very pleased how this has turned out and I've learnt a lot of lessons throughout the build. I should have painted much more of the model before assembly, especially the stairs. The card wall insets should also have been glued in place before painting and assembly.The former would have prevented warping  and would have allowed me easier access for my clamps whilst the glue dried..
The extra bits needed for the corners would also have been a lot easier to cut and insert if the model hadn't already been assembled  and would have made painting the interior a lot simpler. The internal window frames, that seemed a good idea at the time, were a pain when it came to the centre floor being removed, leading to a lot of filing. The roof, like the centre floor, is a very tight fit and really needs something to grasp to enable its easy removal.
I'll be putting a lot of what I've learnt into practise with my next MDF build, but I doubt I'll be giving another blow-by-blow account like this epic tale has been.
I am however not quite finished with this build, after all it's just an empty shell at the moment and a bit of internal detailing is already  planned. and started., but that for another time.

That's all for this week, thanks for taking the time to visit and I hope that there was something of interest herein.