This week has seen some signage added and the roofs given some colour (by way of print-outs)
The first building will be fairly familiar to anyone that uses any of Tommy-Gun's free printed models and is the Blue Sun  general store.
The sign sits slightly proud of the main building and doubles as a positioning aid when placing the upper floor onto the lower.
The second building is the famous "Soapy Waters", Laundromat. This sign I picked up whist randomly surfing the interweb thing for just such things. I thought it just "cartoony" enough to be amusing and not so much that it wouldn't be unfeasible as a real-life laundromat.
(Note though, I think it was stretched a bit in photoshop to fit the width oif the building.)
The more discernible will also note the change in brickwork around the front entrance after the recent famous 'lost door' incident (pass me the aspirin).
The third building has had n awning adding that extends around its other side and now maybe you can see the reason for the slight indent in the street's frontage. The awning gives an additional anchorage point too, butting on to "Soapy Waters". The original awning should have been twice the height, but faced with yet another fitting problem I cut it down as a quick fix. 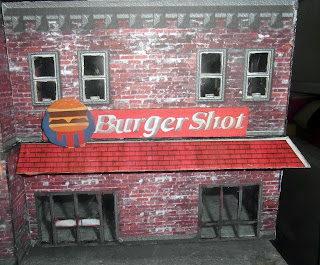 The signage for the third building requires the upper floor to be attached and reveals it to be a burger joint. Once more I'm sure a lot of you out there will recognise this particular fictitious burger chain.
The sign comes from a photograph of  a screen-shot taken from my TV screen, then manipulated in photoshop way back in 2012, when I was no more than a novice with photoshopping things. I'm pretty sure I could make a slightly better job of it now, if I could be bothered, but  I reckon it's acceptable enough for a wargame standard table-top game.
The street is about 23" long (about  57.5cm), including the 'indent', it's about 10" deep (25cm) and to the top of the roof parapet is  about 6" (15cm), so it has quite a large footprint, but still fits onto one of my terrain boards (as above).  The roofs were given their rather boringly bland concrete grey textures and I've temporarily added some of the HVAC units for the photograph as I haven't decided yet which I'll use.
The rear of the building still needs a lot of work to finish it off.
Blue sun has a roller door to be added (one more thing lost over the years) and there is a set of stairs yet to be made (and therein lies another tale of woe)
The photograph does show one of the few 'working' doors on this model in the rear of the burger joint. 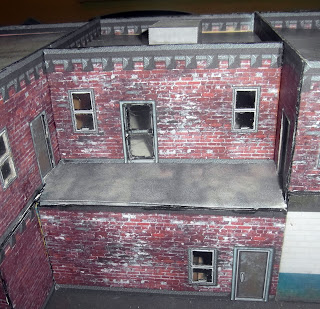 This close-up view of the centre building shows the three doors that give access to the upper floors - the left and right ones 'work' though I'm not happy with either.
The centre, upper, door is yet another bodged job as the two 'sides'  of the door were not the same door and a reserve door had to be fitted. The architect for this whole bodged project would surely have been sacked ? (Allowance have to made though as he was heavily drugged at the time).
There is still a staircase that needs adding; the landing will be on the left the stairs will run left to right across the back wall of "Soapy Waters" down to the ground, near the ground floor window.


The only interesting thing about the final side is how few windows it has.


And that, as they say is that. Other than the external staircase to add, this model is in a playable state, even if the interiors (or lack thereof) leave a lot to be desired and as I have already cut-out the interior for one of these three I'll be fitting that together over the next week and posting about my progress next time

That's it then for this week, I hope you've found something of interest.

My other blog has also been updated and the post can be found HERE
Posted by Zabadak at 09:29