Not much progress to show (again) this week, but at least this time it's not because I spent most of the time searching for the building pieces I'd already made.
After the various unfinished walls had been finished - involving yet more windows to cut out, I had decisions to make concerning the doors.
I originally started this model with the full intention of having  opening doors, but this causes problems with floor height as the door has to clear the floor  when open and leaves and obvious 'step', up into the building. I don't particularly like this idea and instead opted for an internal floor that left the doors flush with tabletop and none-opening.  In-game I see no great advantage to having opening doors even if it does give a bit more 'realism' and they've seldom been a major factor in the games I've played so far.
For the floors I've used the same artist board as I have for the walls, covered in prints from various WorldWorksGames buildings. 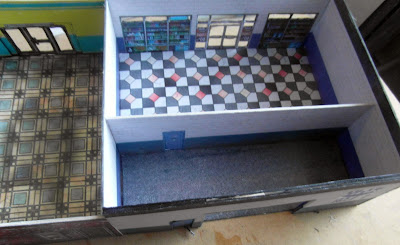 The right-most building, which I'm surer many of you will recognise has had a dividing wall added, about 1cm shorter than the other wallas  to accommodate a foamboard roof for the second floor. It has also had  the flimsy doors replaced with a more substantial one from another model. The door don't open and merely butt onto the floor, the internal door is however open able as I'd made this way back at the start of this three years ago! 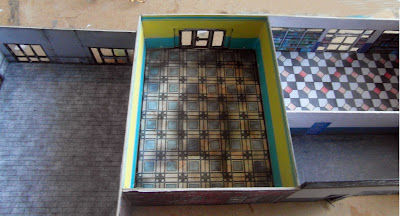 The two other buildings in 'the street' also had their problems, the centre one was meant to have a doorway, leading into the building. This door went awol and I improvised a make-shift one from other pieces.
In the  picture the internal front wall of the left-most building was printed back to front and was cut very carefully into three parts and re-glued onto the front wall. The two cuts can easily be seen in the picture despite my attempt at hiding them.

This week's post has been a bit rushed as I've been away for the week-end and not in the best of health either, but I'm keeping my fingers crossed for next week as I'll have a lot more time and will be showing the progress I'll have made on the 'upstairs'.

My other blog HERE  features Roman legionaries this week.
Posted by Zabadak at 12:20