I decided to try and finish off a project that I started three years ago (for the first mention of it see here), I think the major reason why it was never finished was that the material I was using was art board rather than the foamboard I use now for nearly all my buildings.
It took me almost a week to find the relevant pieces, cunningly hidden in plain view for the most part.
The "street" was intended to be  a block of three shops and it still is despite my misgivings now about the whole thing. I didn't want to actually 'waste' all the effort I'd gone through to get this far on this project all those years ago.
At the time I  started this I was taking about thirty tablets a day for breakfast alone and miscellaneous other medications throughout the rest of the day too. 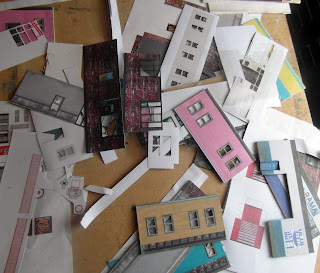 The two photographs above and to the left will testify to the fact that I was the equivalent of being under the influence when I'd started this.
There are whole walls cut out and not glued to here counter-parts, windows panes still needing to be cut into card and doors still needed fitting (and finding in one case).
I also didn't have my original sketches of how I wanted to fit the whole thing together, which definitely would required another search. The basis of the whole build were buildings from "Tommy Gun" and two MicroTactix (all freebies).
I did photoshop a lot of each model to get to my final versions and also to enable some internal detailing for each of the 'shops'.
I did find the sketches I'd made of all three 'shops' and even some of their internal detailing.
The next thing to do was to complete all the walls; there are a total of 16 external wall forming the perimeter of the block and four internal walls that were the dividers between the three premises on two  levels.
A quick sort through of what I actually had, was made and some priorities were established, namely completing the final walls, door windows etc. that still needed doing.
This task of course was not going to be any easier as upon inspection of the pieces I did have, one wall had bee printed back to front), whilst another's front and back didn't match and was about half an inch out.
The task had suddenly gotten a lot more difficult than I'd imagined. 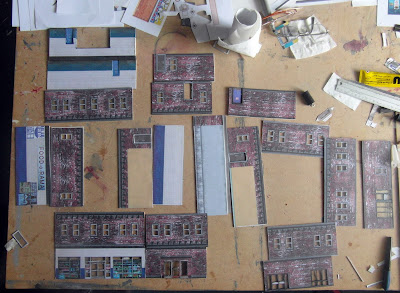 I did eventually get some order into the various parts .
The picture on the left is missing a mere four walls, all of which had to be completed before much further progress could be made and the whole thing assembled.
Assembling of course was going to bring a whole new set of problems.
The whole of the second story (it''s a two-story block) had to lift off to reveal the ground floor AND sit tightly on it; there has to be a floor on the ground floor and the upper floor as well as fitting a roof.

As this was started with Art-board  it would really have to finished using the same materials too, which again brings on a yet another complication - fitting the corners ! With foamboard one wall would have a rabbet cut into it whilst the other butted into it -  but this artist board stuff ?
Floors always cause problems too, you can either glue the walls around the floor or on top of it, both having their own advantages and disadvantages.
Whilst I haven't set a deadline for completion of this build I'll be working on it no more than an hour or so four times a week and I reckon it'll take about four weeks to get some semblance of a building  at the end of it.

That's it for this week, next week I'll be posting more about this wip.

In other news I seem to be gaining and losing a single follower on a regular basis, which is odd, but probably par for the course for "Blogger" and it's not anyone I can actually pin down !

Over on my other blog HERE, you can see my attempt at painting a statue
Posted by Zabadak at 09:45