The East Side Alamo (Part Two)

The fusillade of shots from the North barricade manged to merely knock another two zombies over, but the zombies just kept on coming,
As the defender made a rough firing line they finally realised what they were up against and were stunned (almost to a man) by what they saw.
[the blue counters shows stun, the yellow is a duck back and the green is out of ammunition]
Realising that Jerome had extra ammunition, one of the defenders took off to get some (Jerome was at the top of a nearby building - this could take some time !)


Elsewhere the situation wasn't so bad, but it was getting steadily worse.
Sonny who was defending the South barricade by himself now was the best shot amongst the defenders and with his shotgun he could hold this position easily, even though the numbers of zombies were steadily increasing.
Elsewhere, the East barricade's sole remaining defender killed off another zombie, whilst the West barricade had nothing going on.


With so little action from the defenders the zombies continued their path to the promised lunch they could see ahead of them, all they had to do was push the barricades away !
The defenders at the North barricade came to their senses as Michaela from the South barricade arrived with her SMG as a reinforcement. The single defender that could fire, did so, this time killing one zombie.


The west
barricade was beginning to see some action as another four zombies drifted towards it, drawn no doubt by all the ineffective gunfire.
At the East and South barricade another couple of zombies were dropped .

Desultory gunfire form the North barricade dropped a few more zombies but drew even  greater numbers, all headed towards the West barricade, even the zombies it seemed weren't going go to be drawn into a solely frontal assault. At the East and South barricade another couple of zombies were dropped .
Sonny, at the South Barricade continued to hold his own, but Hendricks abandoned the East barricade as he ran out of ammunition once more killing another zombie with his last shot.
The civilian that couldn't
stand the sight of the zombies and had ducked back into cover decided that he's had enough and headed for the safety of the Jerome's building.
At this point, the defenders all decided to take stock of their situation, as the zombies were slowly winning their battle against the North barricade and they slowed their fire down,


Sonny at the South barricade was still holding his own but the numbers against him were slowly building.


The west barricade was also  coming under steady pressure as the defenders had concentrated on their North barricade, but for the moment was still holding.

It was inevitable though that the North barricade would eventually be pushed back, the resultant gap being sufficient to allow a zombie through.


(Sorry but it's another long aar - you have been warned.
The true intentions of Hendricks were now revealed with an event; he never did want to be a gangsta and decided he'd rather be some sort of adventurer (a survivor), but he'd string along with the gang for the moment (he was out of ammo anyway and not much of a fighter either).
Drawing his knife he dropped behind the improvised defensive firing line as the others brought down as much fire as they cold on the zombies - Michaela managed to drop three by herself.
The trade off of course was that the added noise could bring more than they kill (which it did)

The west barricade was also coming under real pressure now, the build up of zombies was beginning to look less like a trickle, but Sonny on the South barricade was still confident he could hold his bit of the perimeter.


Jerome meantime was dishing out ammo atop the roof of the building he was on (actually helping the situation by not shooting !).

Another event seemed to spark the defenders into positive action with Michaela and another sallying out beyond the failing North barricade.


It was never going to end well, despite a few zombies being dropped. The zombies retaliated swiftly and attacked the two companions outside the barricades, buoyed on no doubt by their reinforcements - an effect of the gunfire ! (there were 10 zombies generated by noise from about thirteen shots, each needing a 1,2 or a 3 !)
Both Michaela and the chap in the flat cap that went with  her were swiftly overcome by zombies neither one of them getting a shot in !

Things hadn't changed much at the South barricade, except Sonny seemed not to be able to stem the zombie reinforcements. 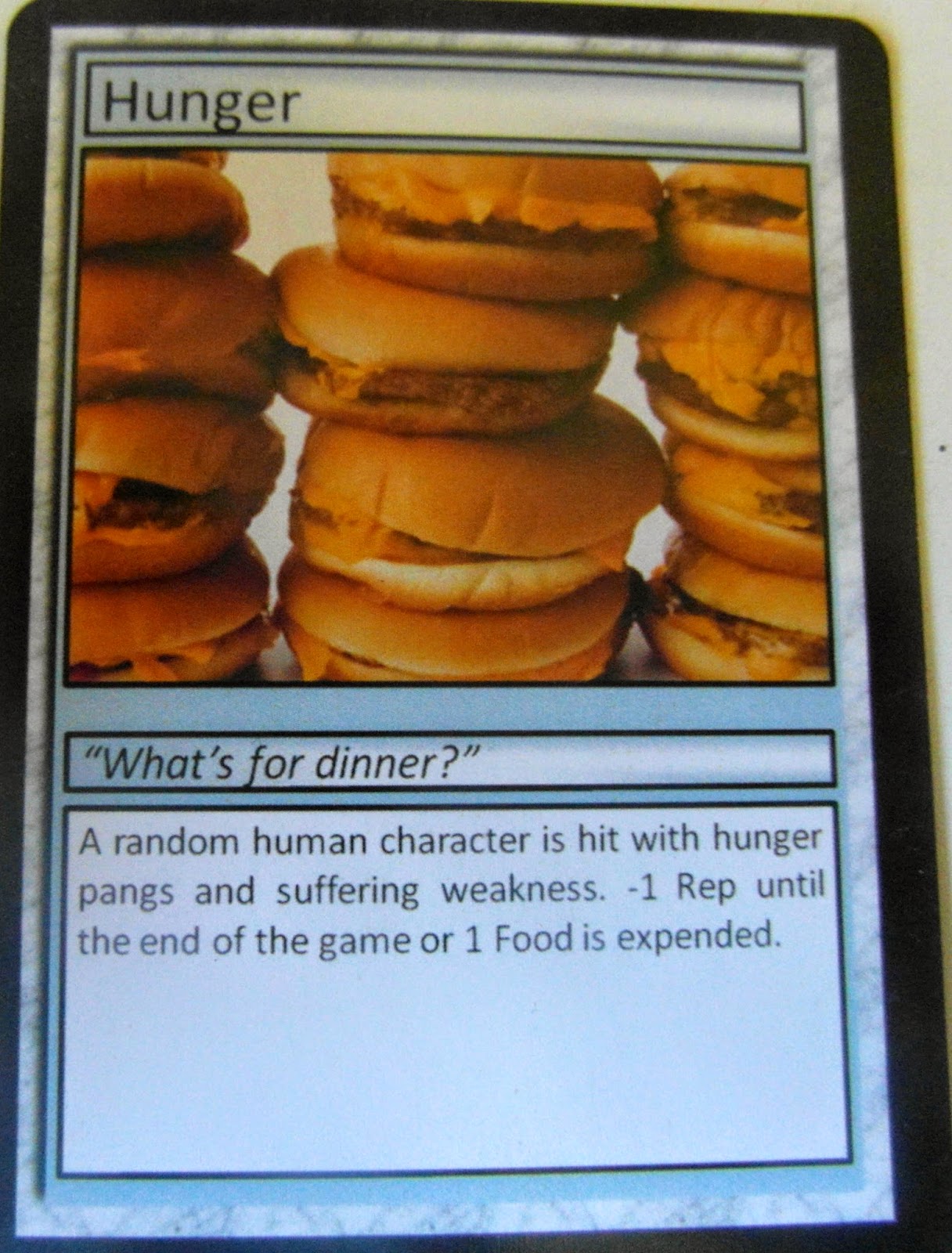 Another event, though probably not  one the defenders could have done with, resulted in Hendricks realising he'd missed breakfast.

And while Hendricks was still wondering about his breakfast, the zombies fell upon their own breakfast.
The gangers too the opportunity to take a break and let all that had happened sink in (they didn't roll their initiative) and they hardly noticed that the west barricade had finally been pushed aside too. The defenders would have been fairly safe had this not occurred,  as the zombies to their north  wold be occupied for at least one turn feasting, but the dice gods had other ideas.

Apparently Sonny at the south barricade also joined in the apathy, probably wondering why all the firing had ceased up at the North barricade.
The dice gods were in a very mischievous mood though and rather than give the defenders a chance to flee, decided they should hang around for another turn contemplating life the universe and everything. The zombies though had different ideas !
One civilian decided to duck back into the house, but Hendricks the runt (his ability), still thinking about his stomach fell under the claws and teeth of the mini-horde very quickly. The woman with child, now used to zombies, knew the routine well and she too took to the hill rather than also die very quickly.
The last civilian standing didn't do so for very long and he too went down, out of the fight. The feast on the North side of the now useless barricade was declared a success by the zombies and they moved to join in the new feasts !
Sonny had seen enough and decided to leg it for the safety of the yards whilst Jerome did like wise, having crossed roofs and gone down inside the adjacent building.
They were all now heading for the "safe house" (see last week's blog)

Sonny tried the gate to the yard - locked,  of course just as the zombies behind him broke through the south barricade. Needing to pass 2d6, of course he managed to pass only one, (with an equivalent rep of 5) such was the way the dice were going.  He would however have another chance, if he'd had failed completely he would probably end up as zombie fodder.
The dice would decide  ! 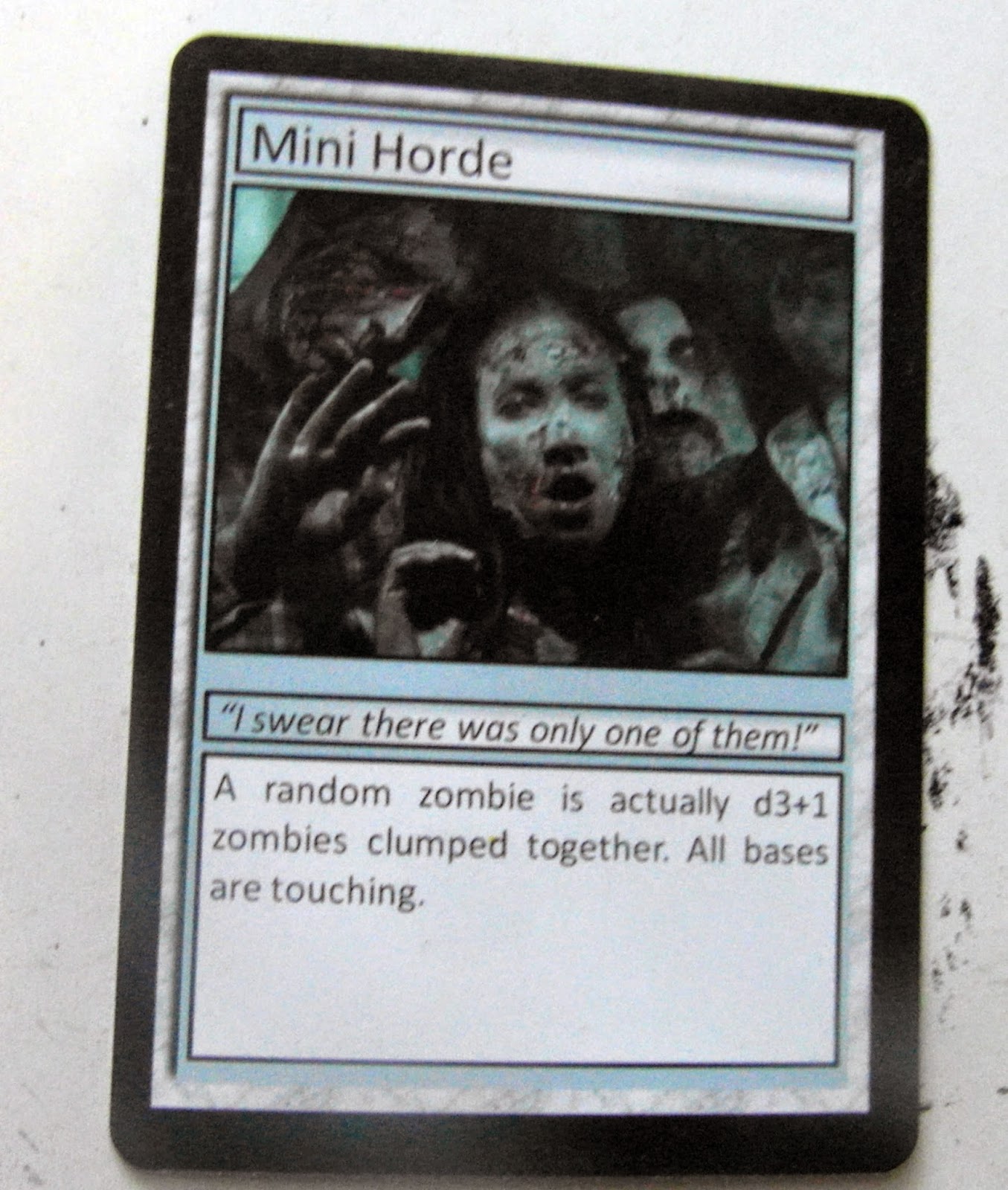 The dice gods had obviously not entirely finished torturing the gang and another event just served to extract the urine even further, with three zombies masquerading as a single zombie, though luckily they were in amongst all the feasters (still ongoing).

The subsequent initiative rolls were even, heightening the tension, but on a re-roll the gangers managed to move first and Sonny gleefully hopped over the fence with the zombies in hot pursuit.

By the time Sonny arrived at the far end of the yard and the zombies had made a half-hearted attempt to break through the  gate and fence at the other, Jerome emerged from the house next door and into the adjacent yard.
Sonny quickly hopped the fence to join Jerome and their way was clear to the "safe house", proving they didn't attract any zombie interest by making a noise or moving trying to move fast.
And that's where we called it, out of the 11 gangers and civilians Jerome and Sonny were on their way to the "safe house" whilst three others  were holed up in the house in the centre of the barricades., the remainder were  zombie hors d'oeuvres.

Another marathon session of about three hours, but still left open-ended with too many questions still to be answered, so my table has been re-jigged for the next episode. It'll be the next scenario I play, when I get the chance.