The East Side Alamo (Part One)

This scenario once more follows Jerome and his gang in the East Side of Perdition. It takes place 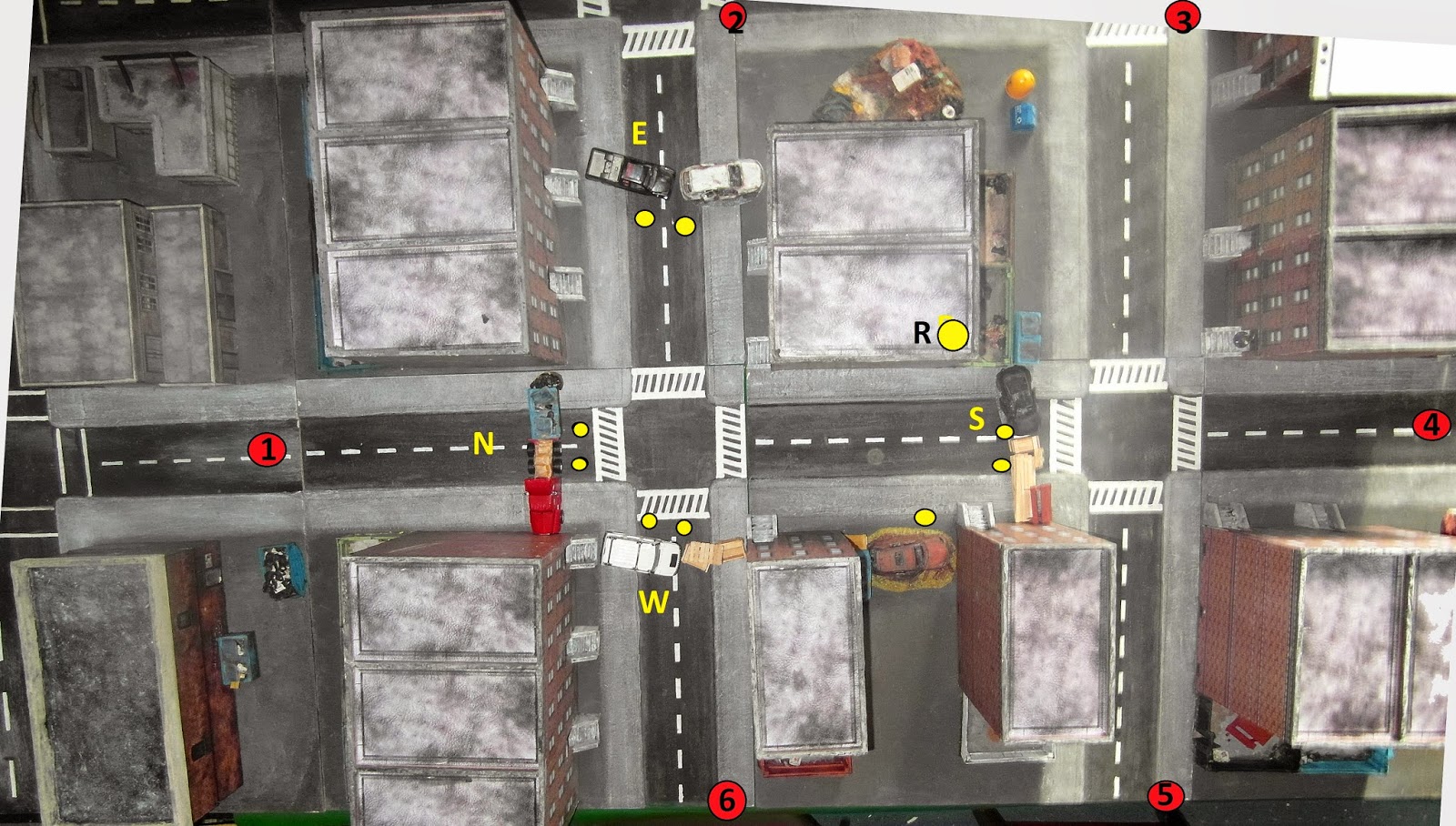 sometime around between the second and third week of the apocalypse.
Jerome has already recruited (and lost) some of his homies; he's searched a lot of the immediate area to press-gang civilians into joining him and to find weapons and supplies.
To secure the area he's had his gang throw together some barricades to keep the growing zombie menace at bay.
The above photograph map shows the main features of the table. The numbered red circles are zombie spawn points, any zombies generated by the game will spawn from these points, (the left-most two foot of the table wasn't used for this game and is purely cosmetic, hence the position of   it). The Yellow N,S,E,W letters are for referencing the four main barricades, whilst the smaller yellow circles are the approximate starting positions of the defenders. At least two defenders  had to start by each of the four main barricades, the gang leader Jerome (shown  by the letter 'R' (?)) placed himself on top of the central building.
There were a total of ten defenders, consisting of seven civilians, each with a handgun and melee weapon. In addition to the handguns, Jerome had a single shot Rifle, there was a shotgun and sub-machine gun with the defenders of the southern barricade and  a machine pistol on the eastern barricade.
There were one or two defenders that had above average melee and shooting skills, but most were not.
The encounter rating was set at 4, for the Urban environment.

The gang leader, Jerome also carried two ammunition reloads with him, but it would be a long hike to get to him on the roof-tops.

The building Jerome was on would also be where anyone fleeing within the barricade, would head for.

At game start there were less than a dozen zombies on the the table.
The zombies, for the next few turns would follow the same pattern of shuffling forwards to attack the vehicles and barricades that barred their way to lunch, whilst the defenders picked them off slowly.


The east barricade, 1 zombie knocked down, 1 dead, but notice the number of shots fired (machine pistol), represented by the white counters. Each shot had a 50% chance of spawning another zombie, but slightly less chance of killing one - not a good trade off. 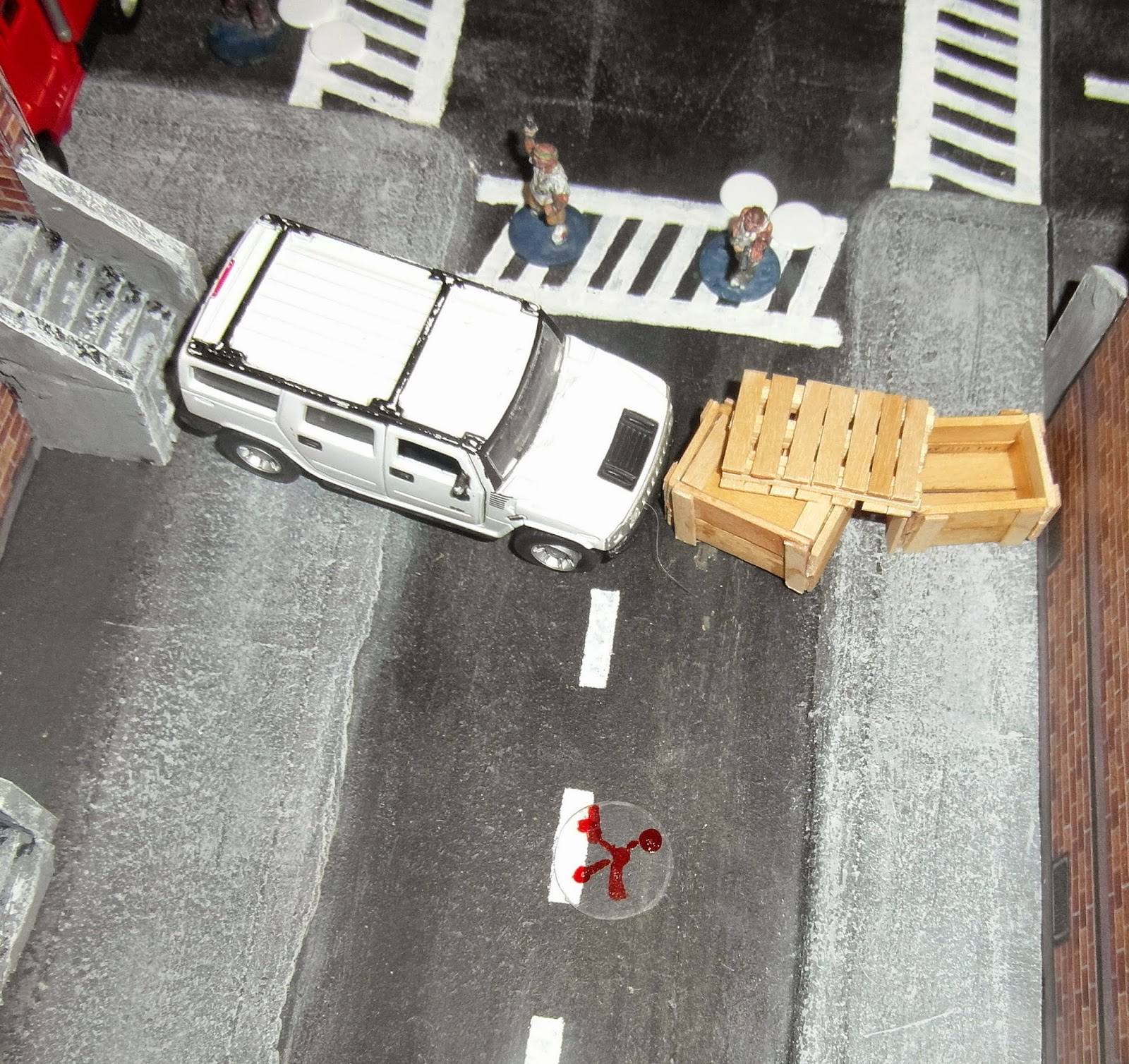 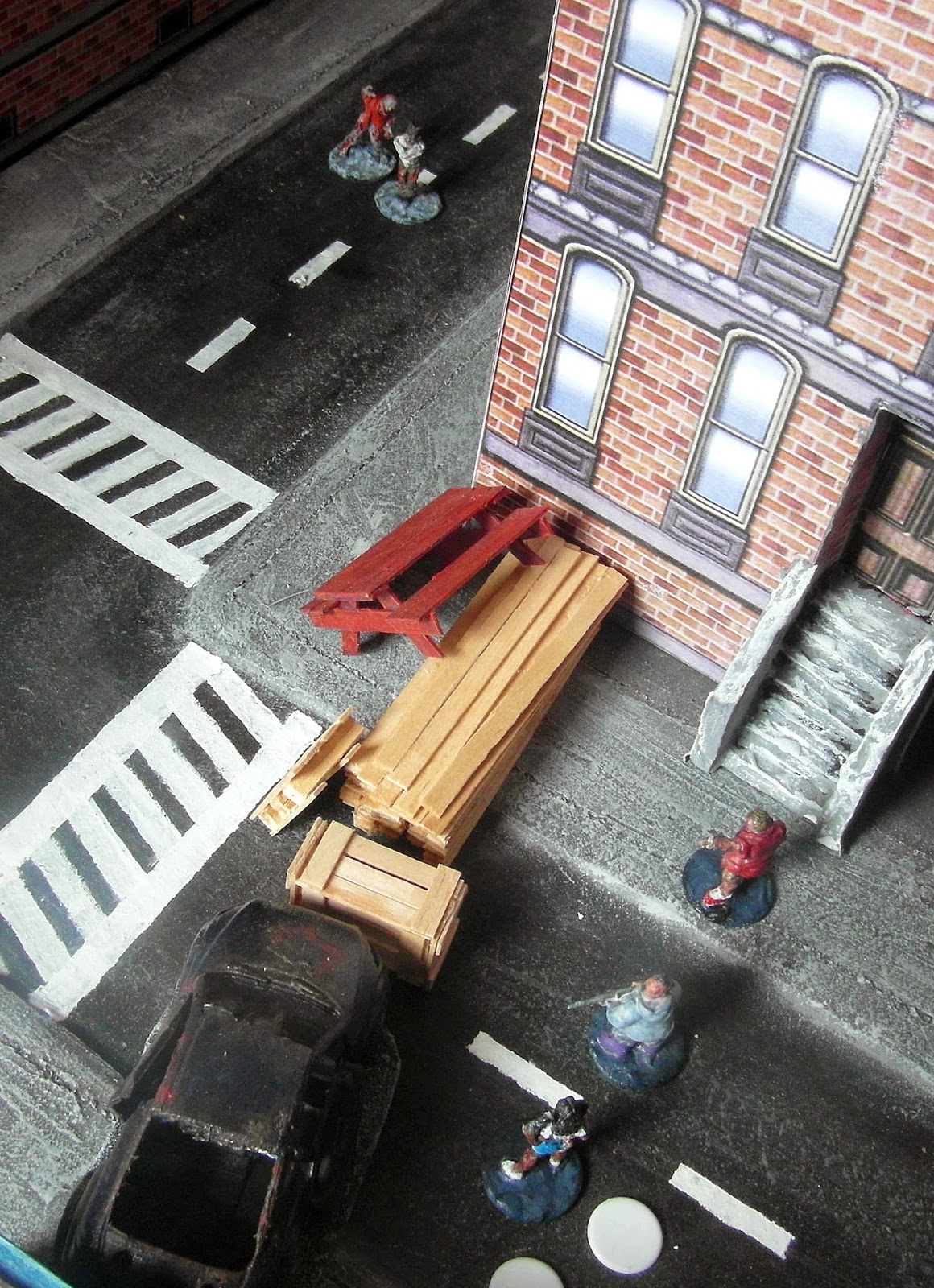 The southern barricade, where a shotgun  and sub-machine gun were stationed, (the former wielded by a civilian with a shooting ability of '5' and the latter by gang member Michaela - shooting '4').


The gangers mostly stayed put, defending their own sector. Jerome on his lofty perch manged to snipe away successfully at several zombies.


The first two PEFs to be revealed turned out to be nothing, but it did manage to increase the ER of the scenario to '5' - very deadly.

Zombie casualties slowing mounted as can be seen by the growing number of casualty counters being used, The zombies, being the very sporting chaps that they were, decided to stay put for a couple of turns allowing the defenders to down a few more of their number.
The few zombie spawning at this point in the game were quite a distance from the action. 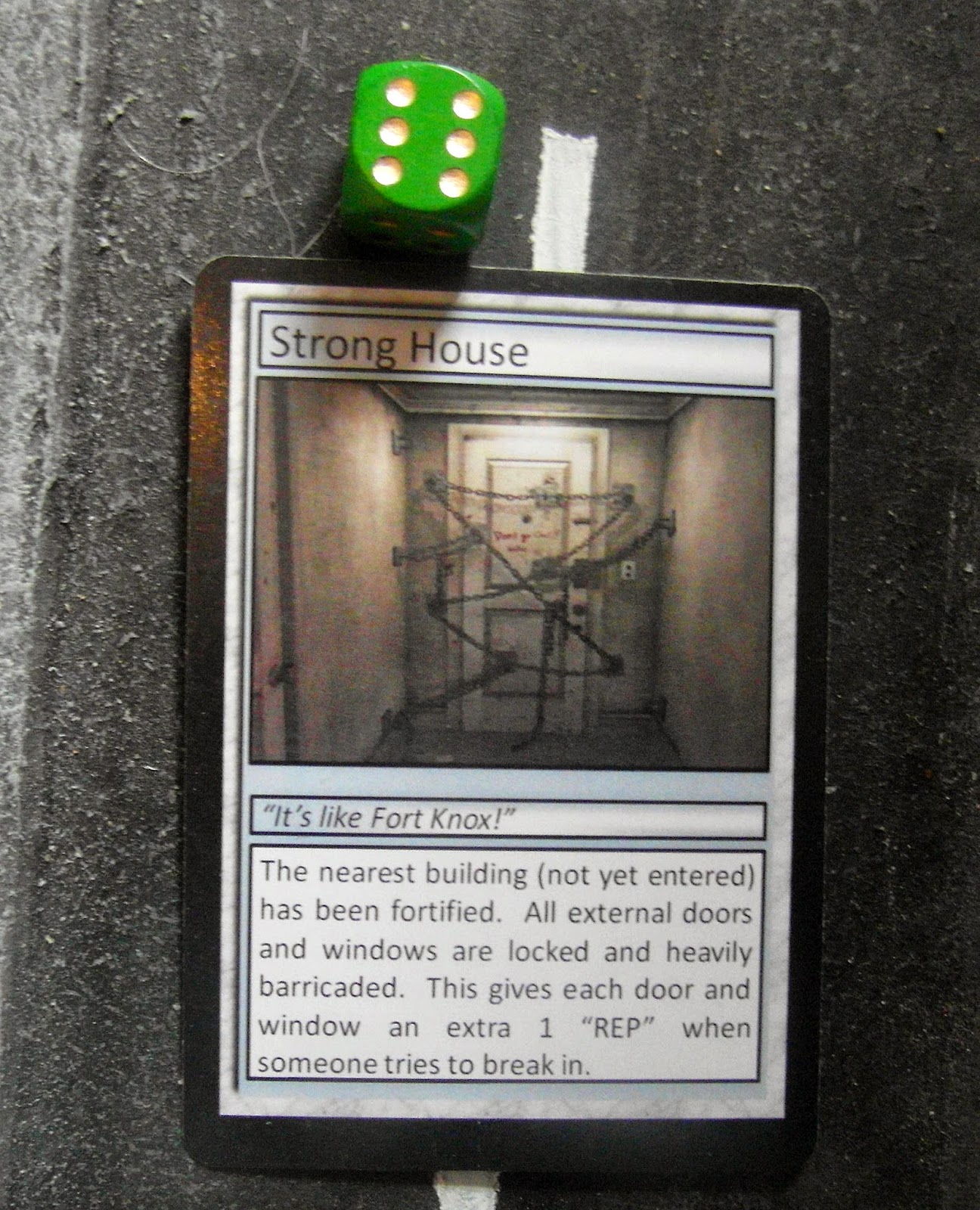 By turn nine a routine of a few zombies appear, the defenders shoot a few, a few more appear because of the noise, but two things happened.

The gang obviously knew of a safe house, however as all the buildings within the perimeter had already been searched, it was determined that it was the building nearest spawn point 3, though knowing this was going to have little immediate effect on the game.

The second thing that happened was that Jerome missed ! Since turn one, Jerome had shot and hit a zombie, not necessarily killing it, but at least hitting it, not bad for someone that had only a 50% chance of hitting.


Getting back into routine, turn 11 saw spawn point 6 depleted.


At the southern barricade two zombies did manage to get to the barricades, causing one of the civilians defenders to duck for cover.

This was an interesting development when it was realised that none of the civilians had encountered zombies and would need to take their zed or no zed test when the time came.
two zombies had also ensconced themselves behind a vehicle, inadvertently giving themselves a bit of cover.

For the barricade, each 1" of barricade gave 2 dice for defence. So, for example a 3 " model car would have 6 dice. Each zombie would have  a single die but up to 6 zombies (stacked two deep) could atttack the car - a pushing contest really.
A die coming up 1,2, or 3 counted as a success most successes wins.
Should the zombies win then the barricade is moved 1" on one of its "corners". 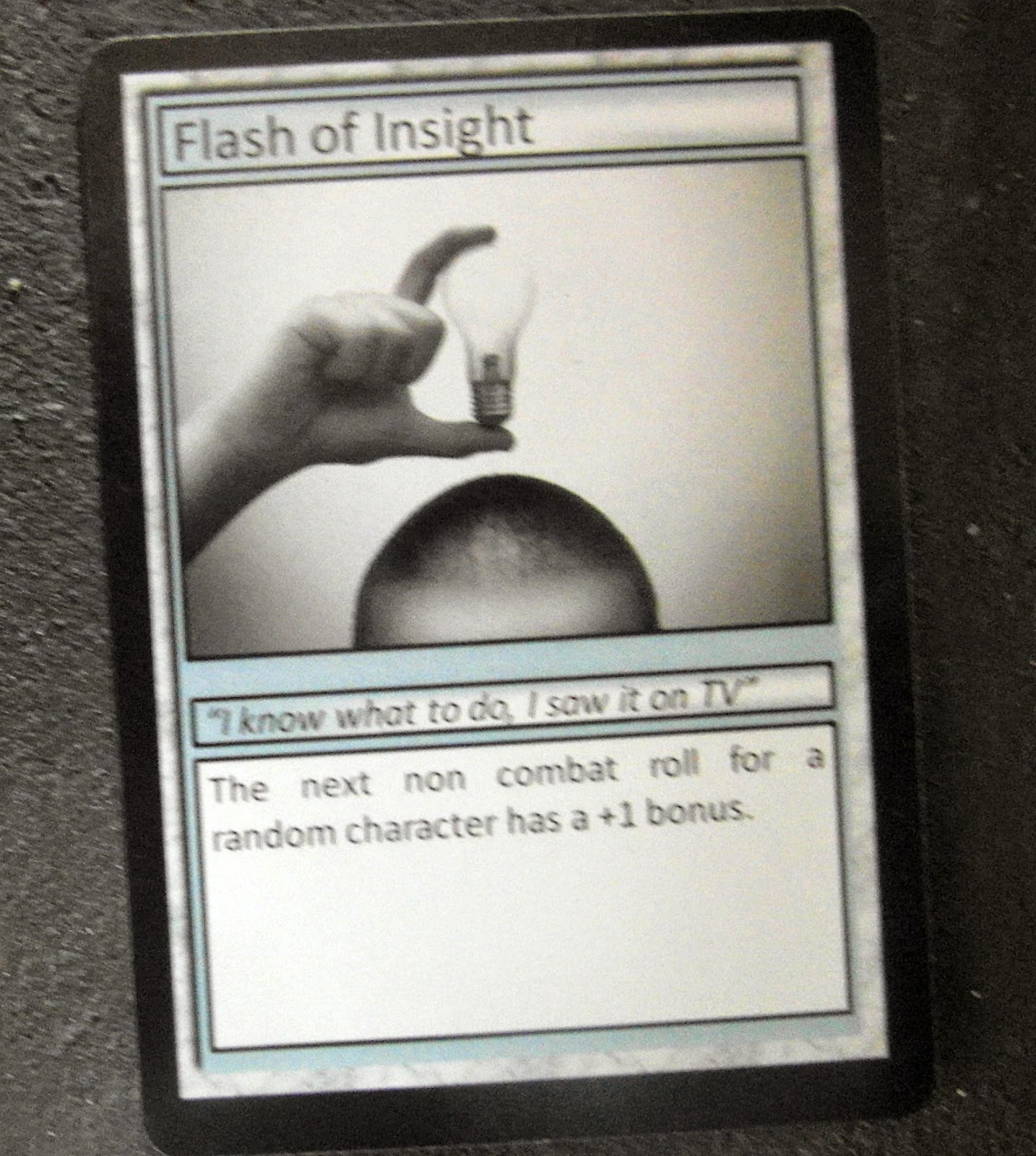 Turn 15 had another event occur (I don't link events to the ER of the scenario), but it wasn't anything that was truly game-changing, somewhere along the line the defenders would get a bonus  !

Even whilst spawn point 4 closed, noise from gunfire produced another.

Even so, those at the barricades were still dropping or killing zombies at a  fairly steady (if slow) rate. 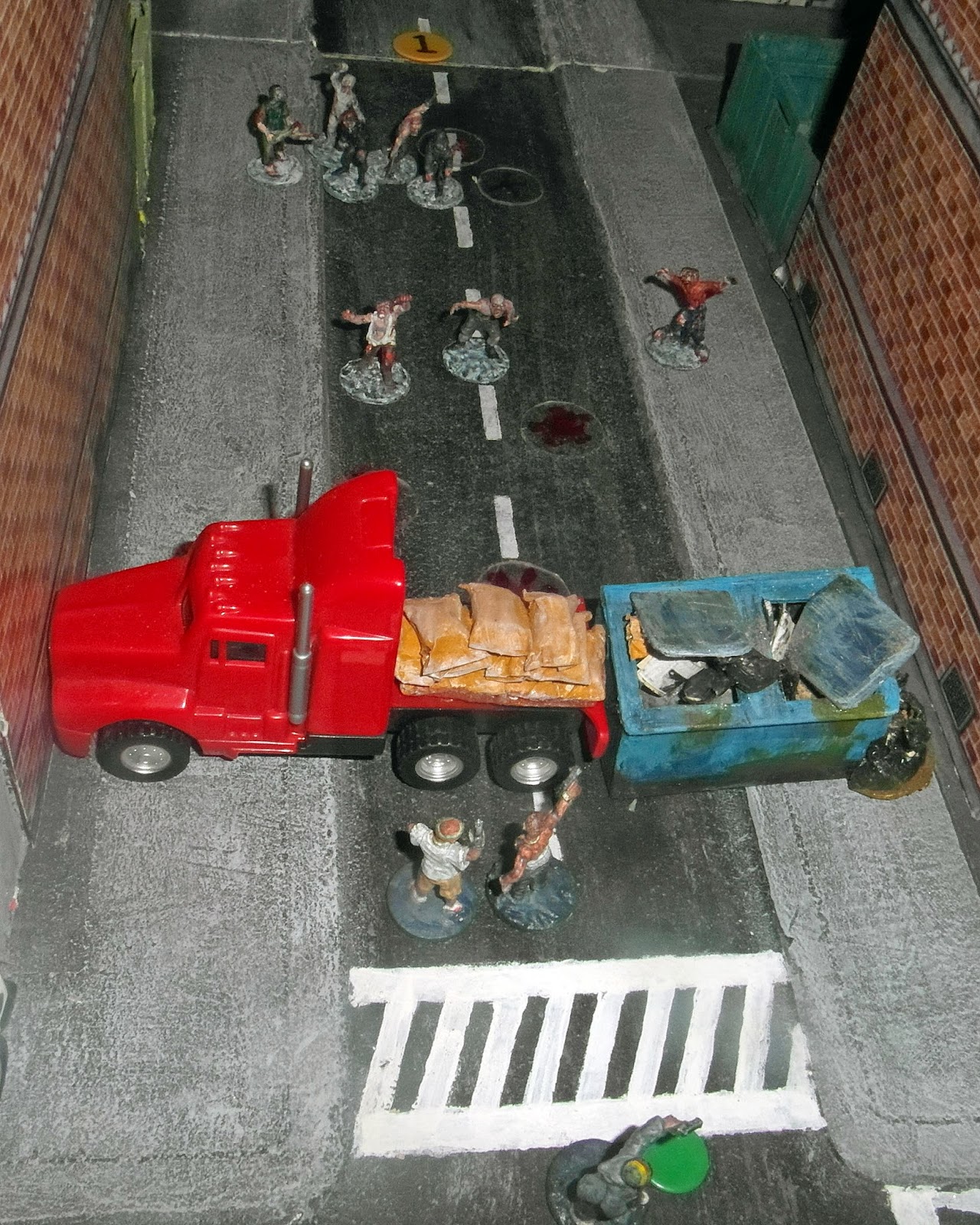 Whilst everything seemed pretty well contained and under control turn 18, changed the game quite dramatically.
Rather than the normal trickle of zombies spawning , this turn produced five, all of whom spawned from the spawn point near the north barricade. (it also had the effect of depleting spawn point 2, near the east barricade)._

Reinforcements had to be rushed from both the southern , eastern and west barricades to help the defenders of the Northern barricade.

Over the next two turn, poor shooting by the defenders, despite the volume of fire they poured into the slowly advancing horde only managed to kill a single zombie, but did attract another seven zombies with the noise.

The Northern barricade was to become the foal point of the fight as defenders wee rushed to stem the tide, zombies were reaching the barricades, making it even more difficult to hit them; Jerome had crossed across his roof top to give a little additional support.
Elsewhere, the usual exchange of fire seemed to be having little effect, but there was yet another group of five zombies heading for the southern barricade, but hey were still some way off, so much so that ganger Micheala with her SMG was ordered to the Northern barricade, whilst the civilian was left on his lonesome.

We had been playing for about two hours by this point and realised that there was still a lot more play in the game and similarly I'll make the break here., with part two coming next week.
It's taken longer to write up the gamne than it did to play it  !