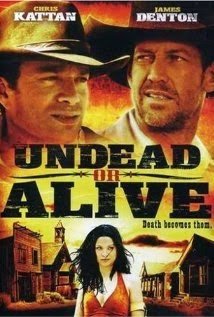 With nothing new on the gaming front, save a few bargain finds, buys and gifts, I thought I'd take the easy route posting this week and give a round-up of some of the zombie media I've encountered recently.
I rarely go to the cinema, so my zombie film viewing is generally from the TV and consequently old. With the quality of the zombie genre in particular it's rarely good viewing. Take "Undead or Alive" (2007), advertised as a "Zombedy", (which imo is never a good sign - along with "zomcom") which, to paraphrase the blurb, features " ... soldier on the run from the Union Army and a cowboy with a broken heart as the central characters.The two misfits rob the corrupt sheriff of an old west town and have no idea that a plague of zombies is sweeping the country, or that Geronimo's sexy niece may be their only hope of survival." It is as bad as it all sounds and I'll never get those 90 minutes back either !
Still, I have a "Horrific hoedown of six-shooting scares" in the 2011 film "Cowboys and Zombies (aka The Dead and the Damned ) to look forward too ! 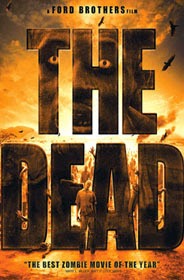 On the other hand watching "The Dead" was an enjoyable experience and a zombie film that I would highly recommend anyone to watch if they have the chance. The blurb - "An American mercenary, the sole survivor of a plane crash, has to run the gauntlet across Africa, battling with the living dead." doesn't really do much to sell the film, but the setting was excellent as was the story-line.
I'm not much of a critic when it comes to films (or books for that matter) but for general entertainment this is much better zombie fare than normal. The overall feel of the film is "big-budget" though the credits at the end of the film seem to say otherwise.
What did surprise me though is that the IDMB gives fairly comparative scores to both the above film and this one !
On my movie scales "Undead or Alive" scores a big 1/5 - avoid at all costs whilst "The Dead" scores a 4/5 - an excellent watch, try and see it if you can. 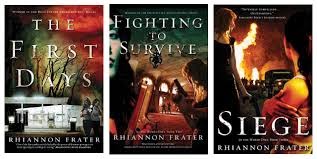 Hospital stays are never much fun and as I knew I has several days of treatment to endure, I needed to arm myself with some books.
The "As the World Dies" series by Rhiannon Frater,  a three volume series that I'd seen recommended, was to be the answer.
These books take a different view of the apocalypse - a much more optimistic one - which made for a nice change of pace. 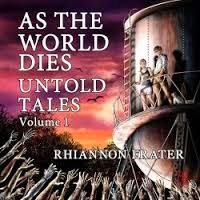 The two central characters are both women (not unknown in zombie novels, but fairly rare) and both have interesting personalities. The fact that I'd finished the first book (and had to get the second ) before setting foot in the hospital should say volumes about how much I enjoyed the books. I bought these as e-books, so no waiting days for their delivery ! I'd highly recommend these to anyone looking for a good mix of action and story-telling and even with some of the usual tropes one finds in zombie novels, there is still something fresh about the series.
My current reading is another  in the "As the World Dies" series,  - "Untold Tales", which gives some of the back-ground stories of a lot of "bit-part" characters in the main trilogy.  Again it's an interesting take on the story-telling side and whilst it' not one I'm entirely convinced by, I'll be sticking with it and other volumes.
I score the original trilogy as a 4/5 - get it if you can, whilst the follow on volumes, score 3/5 but then again I haven't actually finished them!
To round off this post on Media, the latest TV offering "I Survived a Zombie Apocalypse", tucked away on BBC3 late at night is excruciatingly bad, so much so that it makes for compulsive viewing. Set in an actual deserted shopping mall (!), (that archetype of the zombie genre) it plays out like a very bad version of the Big-Brother house, with all the normal interaction you'd expect, but with little of the in-fighting.
If you haven't seen this, please do take a look; see how bad it it and see if you can resist watching more. It is BAD, you have been warned ! 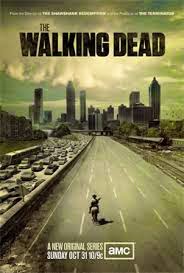 I'll be sticking to the fifth series of "The Walking Dead", which comes to its conclusion this week (no spoilers please), no doubt leaving us with another cliff-hanger ending after an action packed episode.