Doo Dah, Doo Dah.
I was idly waiting for the adverts to finish and some World Cup match to start and thought "I should be building something !". There is a lot of waiting around for matches to start (and half times) whilst pundits drone on about something or other.
So, armed with my usual selection of tools, some very thin card (about the same as a cereal packet, but with no shiny side) and the inevitable coffee stirrers, I set about making a garden shed, which turned into two when I realised how small they actually were.
Both sheds have the same basic dimensions, a footprint of 55mm x 75mm, wall height of 35mm and height to roof ridge of 80mm.
The orientation of the roof ridge is the only different aspect  of either building.
I made a continuous net of the walls and intended to fold them into a rectangle, rather than make individual walls then glue together. This method is not recommended for larger buildings as the result is anything but rectangular.
Once the net was finished and cut out, coffee stirrers were glued to the side and clamped whilst they set. (I only worked about 15 minutes on one wall at any time). The wood glue I used took about 45 minutes to dry sufficiently to enable more work do be done on the model (very convenient).
The bases for the sheds were cut roughly rectangular and glued to the folded walls.
The roof was another single folded piece of this very flimsy card, but was reinforced internally with pieces of scrap wood.
A piece of paper was glued to the card then trimmed for size; next more glue and a sprinkling of some fine sand to get the felt roof effect (tar paper I believe it's called in the US) that is prevalent on sheds.
Matchsticks on the edges of the roof, to glue the paper to and some more coffee stirrers for the barge boards either end of the roof completed as much effort as I was going to  put into these.
The internal windows frames were tile spacers I picked up a year or so ago, whilst the surrounding frame was split and filed coffee stirrers. The doors for the two sheds are a triple layer - very thin card in the centre with coffee stirrers clad to the outside. I had my first attempt at making a pole hinge from paper clips on both doors so they opened (turned out to be more fiddly than it was worth). I'd have been quite happy with doors glued in place, but I'd probably get grief from "you know who".

Internally you can see that the shed walls were each reinforced with two lengths of coffee stirrers, at the top of the wall and at about 20mm from the bottom of the wall (level with the lower edge of the windows). There were also four vertical coffee stirrers used, again to strengthen the models but also to provide extra gluing contact where the walls met.
The floors were sprayed with a black undercoat before the coffee stirrer floor boards were cut to size and glued in place.
The hole in the rear of shed 2 was made purposely as a feature btw !


Windows were given two vertical edges, the tops and bottom edges conveniently using the internal supporting beams as can be seen on the photographs.

Internal clutter of course was a must once I had decided that the roof would lift off.
Most of the internal rubbish came from a small stock of things I'd already made namely the books, newspapers and sacks that can be seen in the photographs.

The poster seen on the walls of Shed 1 all came from the interweb (of course) and were reduced in size.


In Shed 2, I made a short bench for one side out of a lolly-pop stick rather than a stirrer to make it look more substantial.
The green twisted piece of wire, representing a garden hose was an easy addition whilst the tyre was from one of the wrecks I'm making as my next project, covered in a piece of tissue.
The petrol can and oil drum that can be seen in the two sheds came from my friend Stu a few weeks ago. (He's currently making and casting his own buildings !) 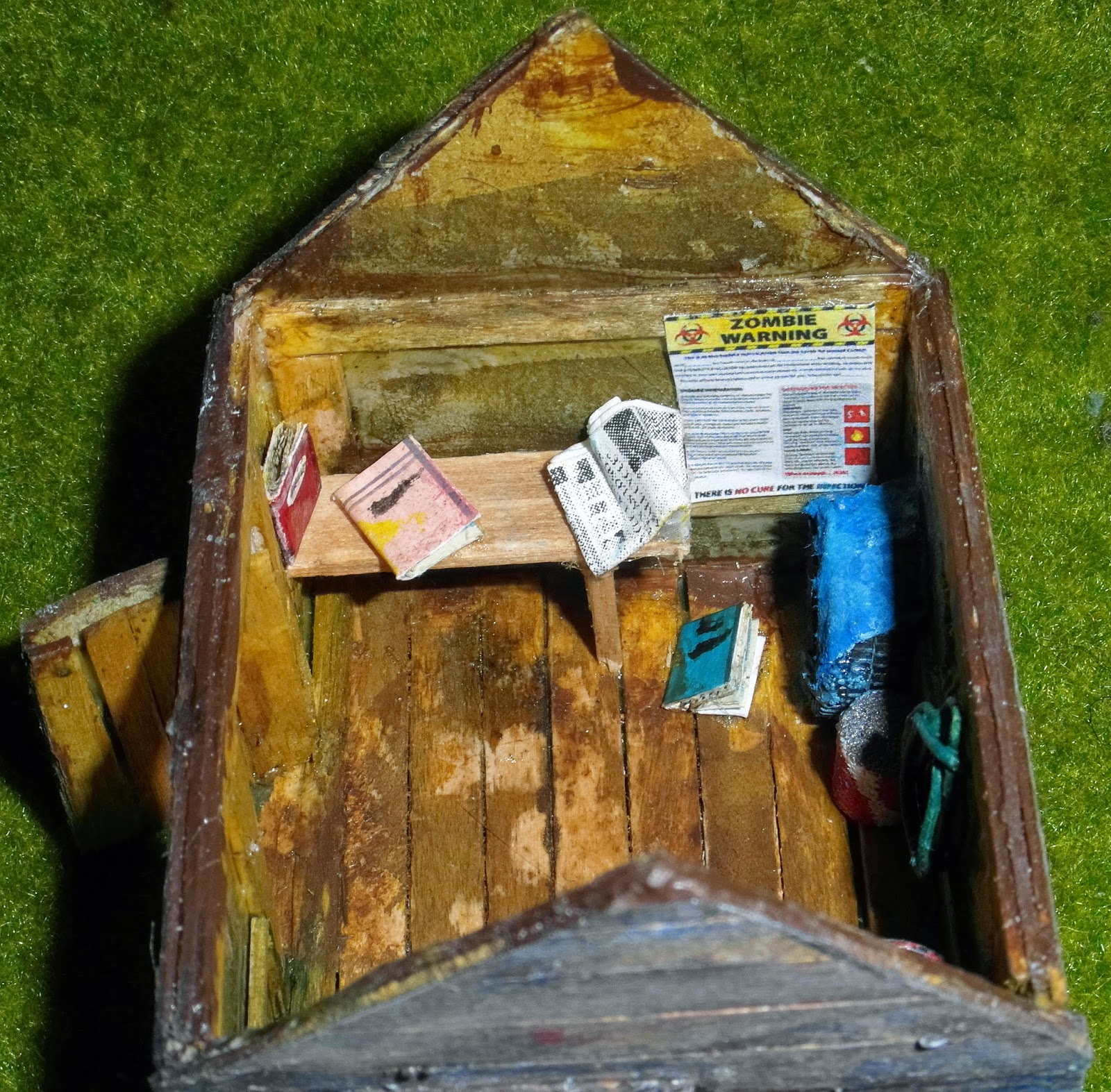 Whenever I've made models for this project, I'm always aware that figures have to fit in them or on them. If I make a balcony, for example, then it's only logical that someone would want to put a figure on it.  and hence space has to be made for the figure to fit.
These two sheds follow the same principles, I've left enough space to get at least three figures in each (on 20mm bases) and I've left space in front of the windows and the door for figure placement too.
These  two models took about 7 days to complete, which is probably about 7 hours overall, excluding drying time.
The slip-shod paintwork will never win any prizes, but it's sufficient for my wargaming purposes.

That's it then for another week, thanks for looking and as always your comments are both welcomed and appreciated.
Posted by Zabadak at 07:01