Bob the Builder will he make it ? 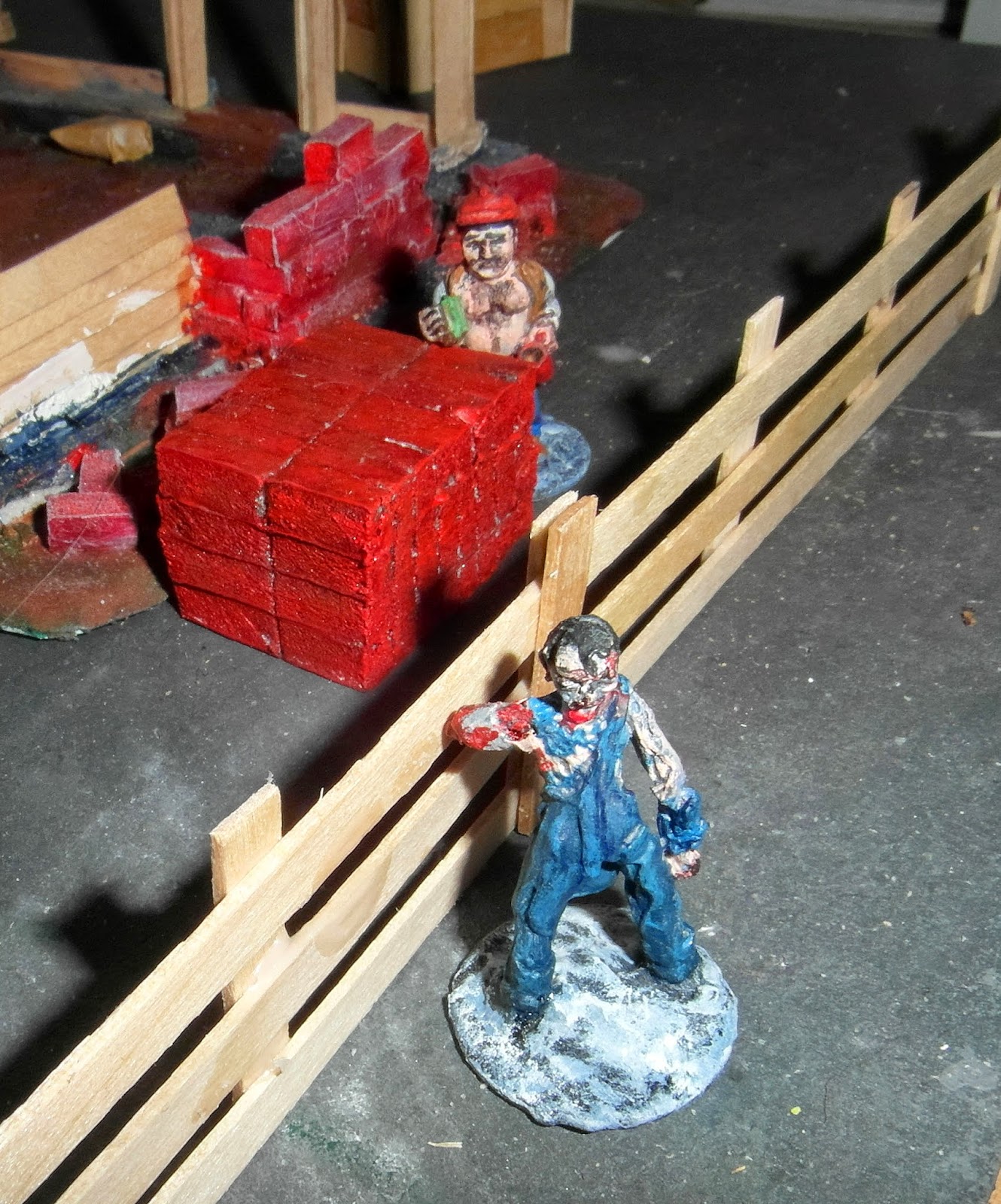 My previous scenario "A day in the Burbs" finished with the "heroes" fleeing in a taxi leaving Bob in the situation shown in the photograph with a zombie bearing down on him. (The zombie isn't going backwards, but his head is !) There was a single depleted spawn point and that would be Bob's exit. The zombies from the previous game are all still present and there are no new PEFs or any other set-up situations to consider as I considered this a continuation of the previous game.
The encounter rating  (ER) for the area was now "3".
This was a new venture for me, in that it would be the first game I've played solo !
Starting positions and other features are shown below:

The yellow circles shown the various zombies still in play, whilst Bob and his immediate threat of a zombie is in the red circle, in the bottom right of the table.
The six spawn points are numbered 1 to 6, from the left hand edge clockwise around the table.
Spawn point 2 has been depleted (no zombies will spawn from that point) and is Bob's escape point.
Bob has a score of '3' in all his abilities (equivalent to a REP 3 character in ATZ/FFO) and is your typical tea-swilling Brickie.
He has a hammer on his left thigh and is a bit of a Mooch (a random character attribute).
I would be playing as Bob in this, my first ever solo game and had decided from the off that he would just leg it.
On turn one the zombie crashed into the fence, failing to smash through it, Bob, recognised the zombie as a zombie and took off running.
Elsewhere on the table the zombies mourned for their loss of their meals on wheels as the taxi took off into the distance.
Turn two saw the zed chasing Bob once more try to break through the fence to get at its fast escaping lunch whilst Bob negotiated the pile of crap that some inconsiderate individual had blocked the exit with.
Elsewhere the zombies had lost sight of their tinned food (the taxi) and were wandering aimlessly about wondering where their next meal was coming from and probably complaining about how hard it was these days being a zombie and the inhumanity shown to those being the living dead.


Turn 3 and once more Bob put distance between himself and erstwhile pursuer. At this point I calculated that Bob was about 3 or 4 turns away from safety if he managed to keep running and if he didn't he could still easily outpace the zombies, providing none arrived at spawn point 3, the closest one to Bob. At this stage the scenario looked like it could easily turn into another "walk in the park".


The zombies though seemed buoyed by the arrival of another three of their kind, but as they arrived at Spawn point 6, well behind where Bob was, I wasn't bothered.
However as Bob had arrived within 24" of two of the zombies already present, they turned and began their slow trudge towards him.
Even with a standard move of 6" for Bob and 4" for the zombies Bob would easily outpace them, but Bob would still attempt to keep running (just in case)


Turn four and Bob was making ground on the pursuing zombies though he was attracting more as he got closer to them. They were so far off now though it wouldn't make a difference.
Turn five resulted in two humans entering the table, one ahead of Bob in the trees (promptly named Pamela), the other on the road (Sally) .  Pamela can just be seen in the top middle left of the photo whilst Sally can be seen in the middle right.
The closing zombies weren't making any real inroads towards closing the distance to the humans !
On turn six Bob was out of breath and decided to stand panting in the trees and both "Pam the pan" and "suitcase Sal" (as they were now known) also checked to do whatever it is that women do when they stop suddenly.
This could well turn out to be a disaster for Bob as the two closest zombies moved to within 6" of him in the trees and would enable them to attack should they get the initiative on him next turn. (I allow the zombies a "frenzy" move of 6" to attack if within 6" of humans.)
I could see the way this was going when on the next turn the Zombies, almost as predicted, got the initiative and managed to get one of their number into an attack on Bob.
Bob fought valiantly, failing to get a single success against the zombie and promptly fell down stunned at the foot of his undead attacker, who in all probability was already licking his lips. All was not lost however as "Pam the pan" was witness to the vile attack on Bob by the two rough looking ne’er-do-wells; the other zombies were closing in very slowly.
"Suitcase Sal" carried on without a care.


Turn seven and Suitcase Sal being the modern woman that she was recognised that the frenzied zombie was trying to give her more than just a love bite. She held her nerve (passed the Brown panties roll) and in a very even fight (three dice each) she swings her briefcase at the head of the zombie. However, unlike in films, where the briefcase would smash the zombie's head in, the briefcase itself smashed, leaving her locked in combat and at a disadvantage for another turn .


Bob, still stunned and on the ground was the target of two zombies now. With five dice versus one in the zombies' favour (I was being generous and gave Bob a single die) the first zombie achieved a mere single success (Bob, being the hero that he wasn't, didn't). This was of luckily insufficient to put Bob out of the fight, but the second attack did. Pam of course could still save Bob, if she passed her Man Down test, her Brown panties test, a fast move test and her Zed or no Zed test.
Surprisingly she passed all three - sufficient to close and melee with zombies - Bob could still be saved and dragged to safety !
In the ensuing even fight, Pam managed to knock the first zombie down, down but not out unfortunately ! No new zombies appeared and spawn point '1' was depleted, yielding another, but even less attractive, escape route.
Turn eight brought with it an event that could provide hope for Bob yet !
A crackling radio somewhere near Bob, sprang to life and providing it crackled long enough then it may give "Pam the pan" sufficient time to rescue the fallen Bob!  On the down side the radio did of course come with a free zombie too.
Two vehicles also arrived on the Table, a big rig cab appeared at spawn point 5, whilst a blue family saloon (sedan) appeared at spawn point 6.
Due to the ineptness of the official photographer, the blue saloon doesn't appear on any photo. It arrived turn eight, turned left and departed turn 9 via spawn point '1' and didn't add to the scenario at all.
Both vehicles would have their routes determined by random dice each time they 'hit' a junction. They had a speed of three (18") and their civilian drivers would have a '3' for all their abilities.
The zombies gained initiative (of course) and of the two nearest Pam, one attacked whilst the other stood up. Pam easily fended off the first but her nerve didn't hold and she broke from melee seeking the safety of the nearby depleted spawn point she had emerged from. The radio, of course, right on cue, fell dead.
Similarly "Suitcase Sal" had had enough of the now uneven contest and having survived the zombie attack, she too fled. 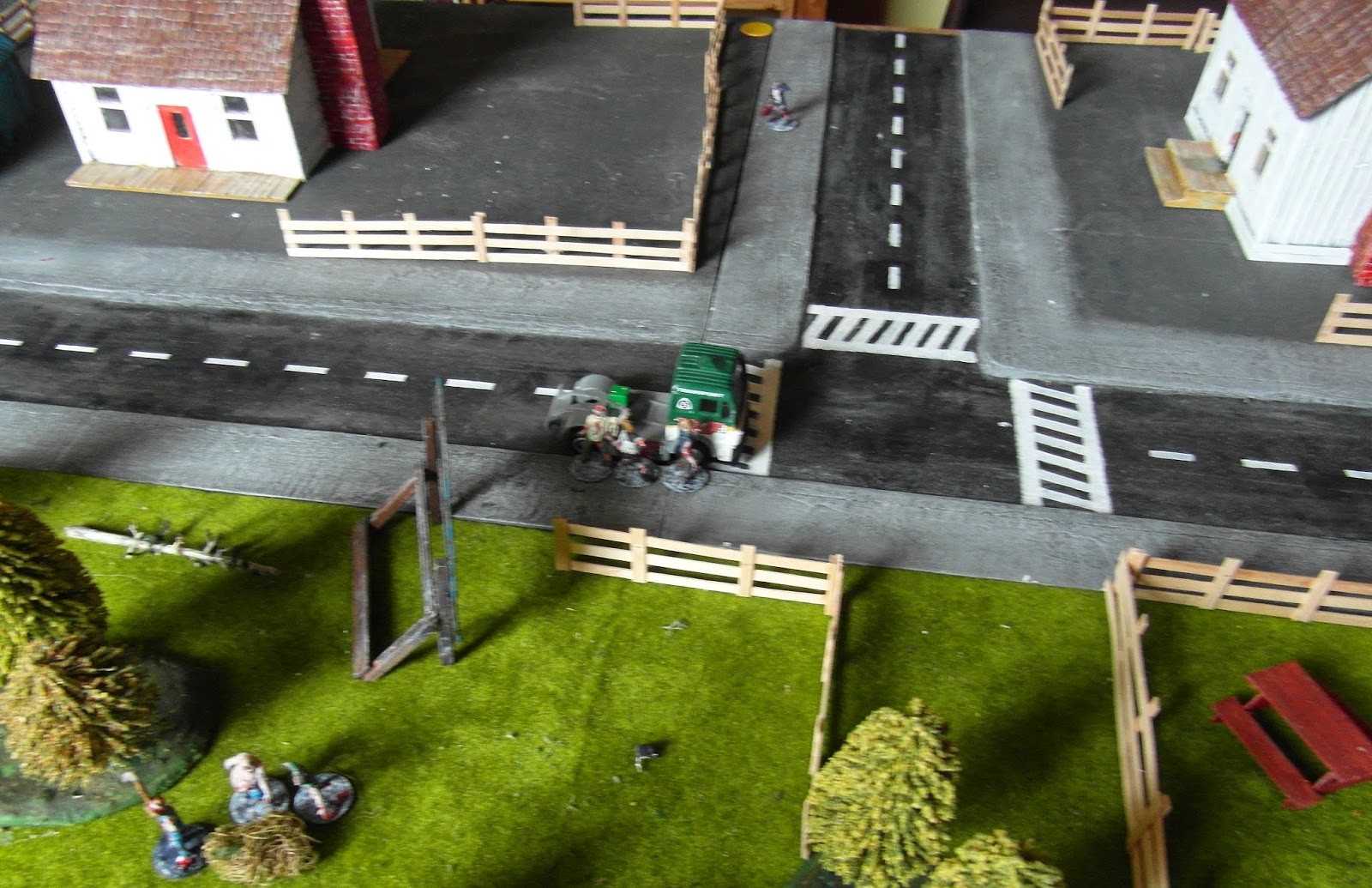 (There was no choice in either of the above as both Pam and Sue had to dice to see if they remained in melee or broke off from the melee).
Turn nine arrived and the zombies stood around bemused for no apparent reason, perhaps the new noise of the big-rig cab distracted them, but in any event they were inactive ! Pam's nerve failed her yet again and she headed to safety whilst Sal decided to break into a walk ( now in the trees she probably found it too difficult to walk i high heels). Meanwhile the big-rig driver continued on, oblivious to everything. 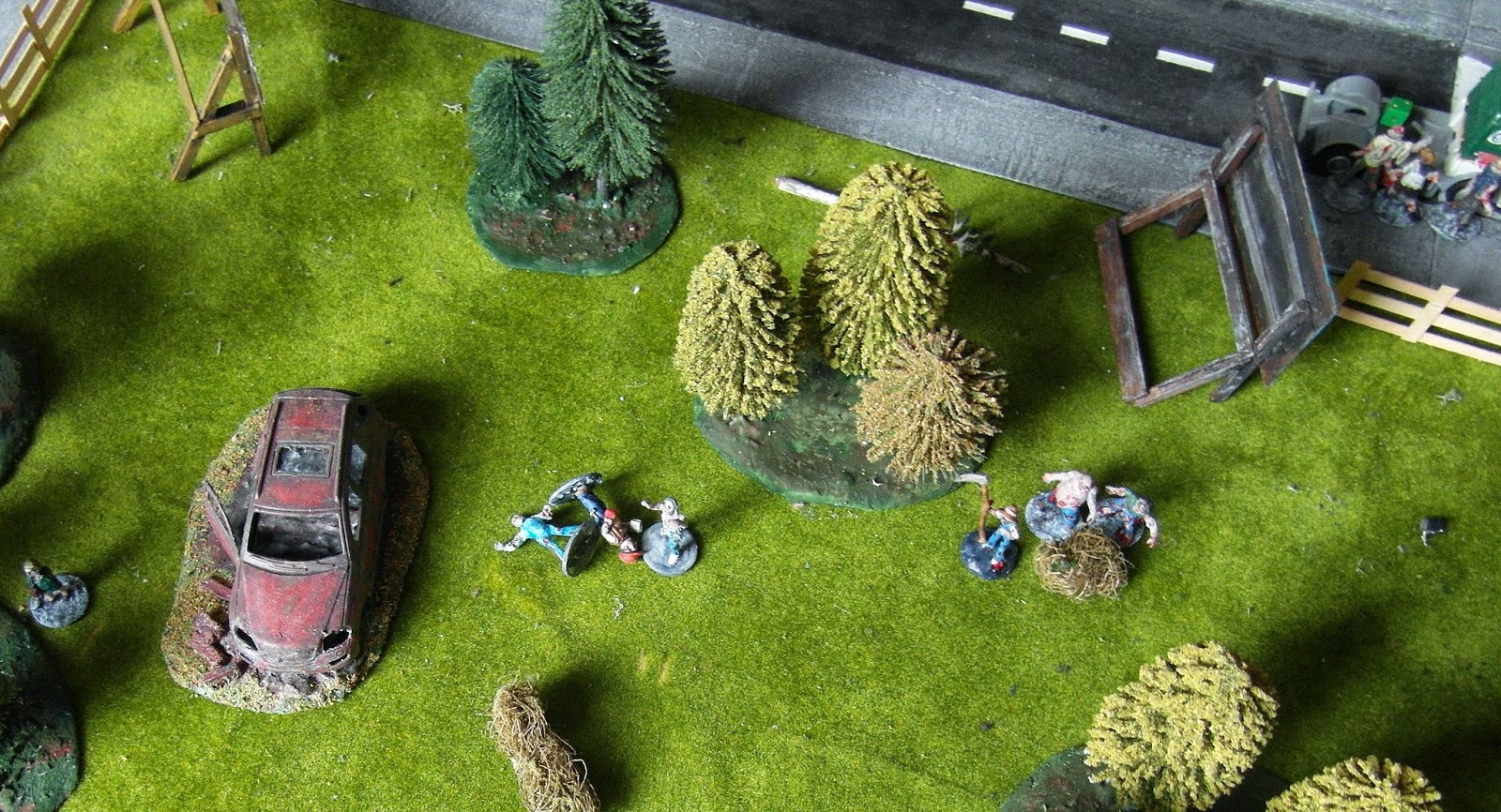 The remaining part of the game saw Sal still strolling to safety and Pam still fleeing and whilst some zombies attacked the truck ( !? - I know) others started on their long awaited "ready meal" i.e. Bob.


The truck leaving the table skilfully missed one of the attacking zombies, but did manage to  side-swipe one into a gooey mess and knock another one down, generating a further single zombie though from its engine noise.
As there was no hope now of rescuing Bob, Sal now also headed towards the safety of Pam's exit point.

Three more zombies were spawned (at spawn point 5) but wouldn't have any effect on the game.


The truck couldn't be stopped and Sal had only two moves to make it to freedom (without fast moving) which she did whilst the zombies continued to gorge themselves on Bob's ample mass.

At that point I called the game.
No new human elements had arrived and there were no humans left on the table


The game had taken about two or three hours and had been highly entertaining; photography limited to a lot fewer shots than I normally take due to camera battery difficulties.


So the original question of "Bob the Builder will he make it ?" turned out to be a resounding "No he won't" though he did have a good chance to do so, had he been given a bit of luck late on.

That's it then for this week and as always your comments are both welcomed and appreciated.