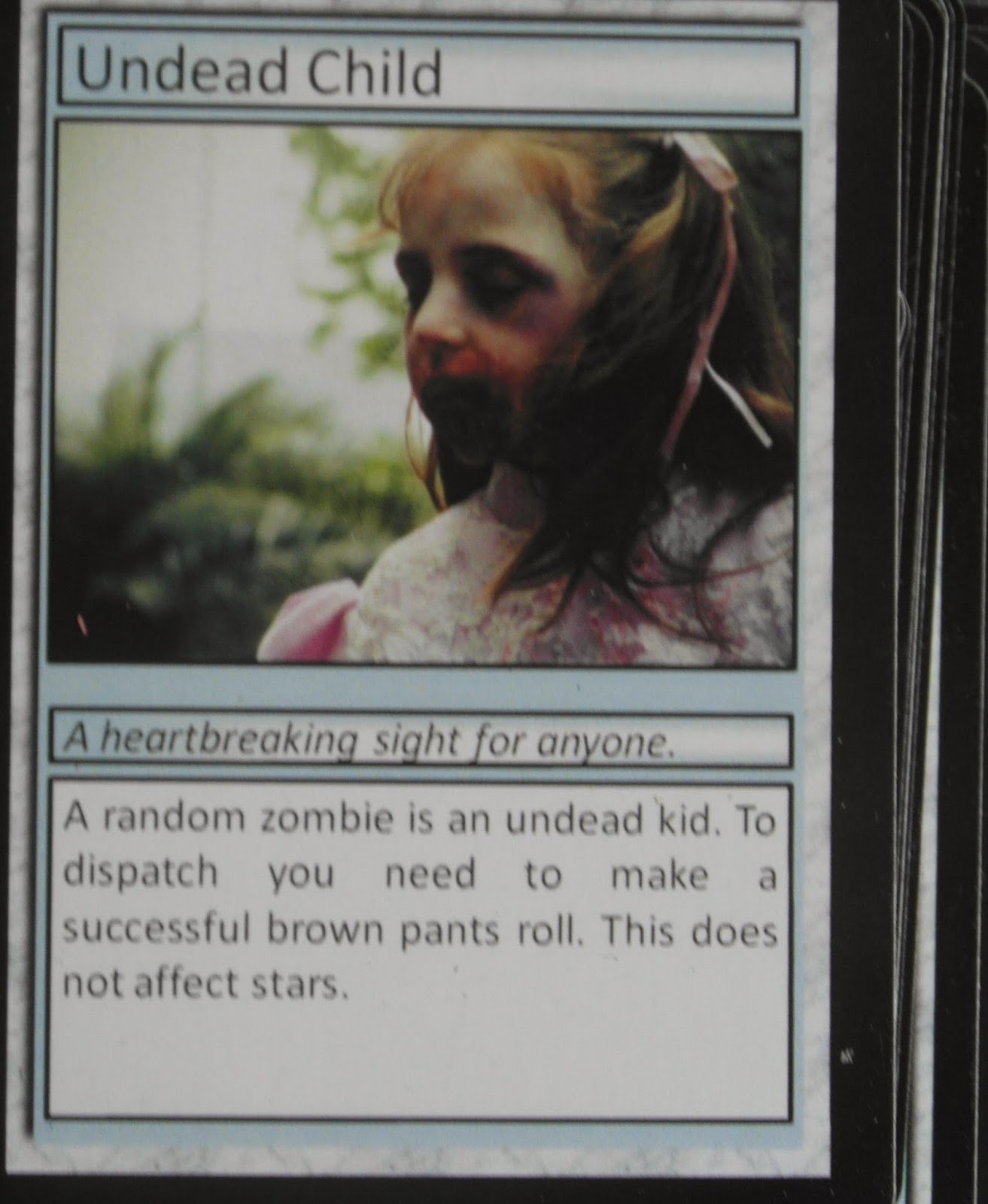 Rather than show you what I've managed to paint up this week (they're still awaiting their varnish-aarrgghhh) I'm showing what I received in the post last week.
Those of you that follow Colgar6's blog will already know that he like to use cards in his games and has developed  some of his own. I ordered two sets of cards from Artscow in January one was another set of event cards for ATZ designed to compliment Colgar6's (I already have his original deck) but the other was Colgar6's deck designed to be used with the game "Full Thrust".
This new deck for ATZ was designed by "Spendlove" and whilst I haven't looked through all the deck yet they look pretty good. As in the first deck there is a mix of styles to the cards but mostly they use photographs. 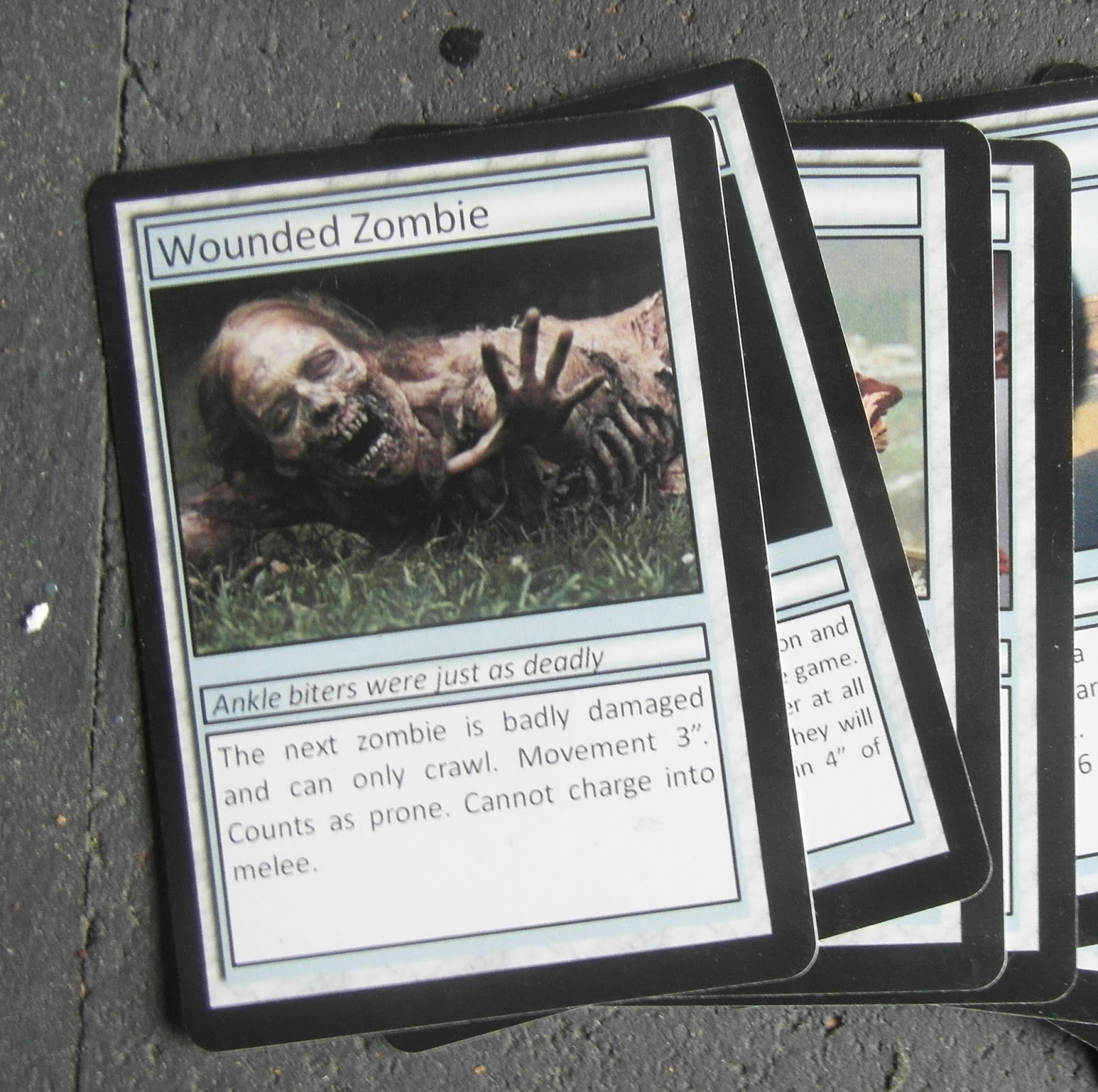 The cards are sturdy and well finished, with a semi-gloss look to them.
I haven't a clue what font is used on them but they are easily read.
They are also what is known as a Poker sized deck which means that the cards are slightly wider than what we'd normally play cards with (they're called bridge cards), which does mean that quite a lot of readable print can be put onto a card. 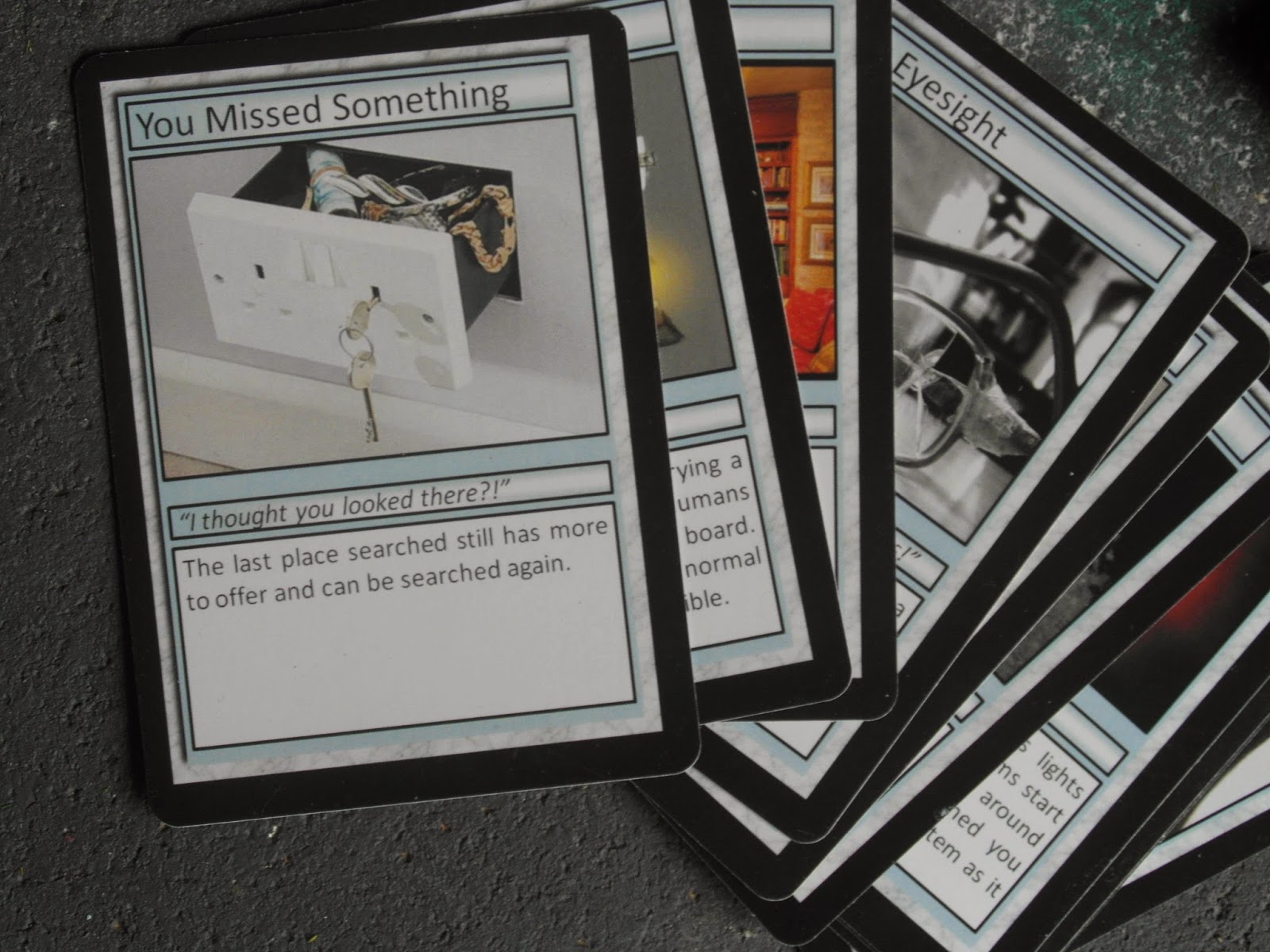 In ATZ the most frequent occurrence of an "event" in game terms would be the equivalent of throwing a 6 on a d6 each turn, which given that ATZ games have maybe two dozen turns or so means that on average I only expect about 4 events each time I play. Now, with 108 cards in my event deck I doubt I see much repetition of cards for a long time. 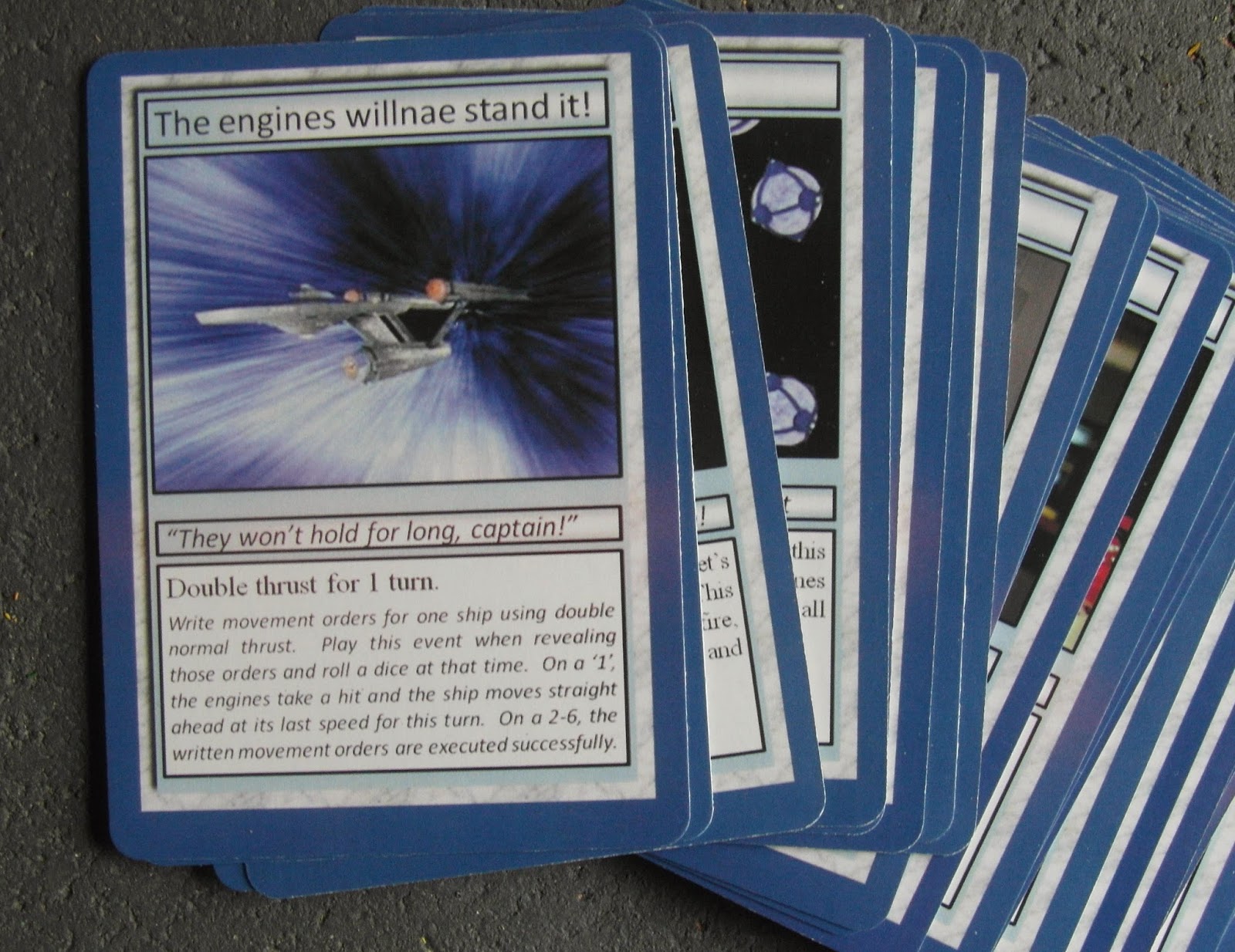 As I mentioned above, I also bought Colgar6's  excellent deck of cards for "Full Thrust" a game using miniature space craft.
The cards are of the same  robust quality of the ATZ cards adorned with pictures mainly from Star Trek. Whilst I may not be a fan of Star trek, no others are more iconic perhaps that Kirk,  Spock, Bones etc. 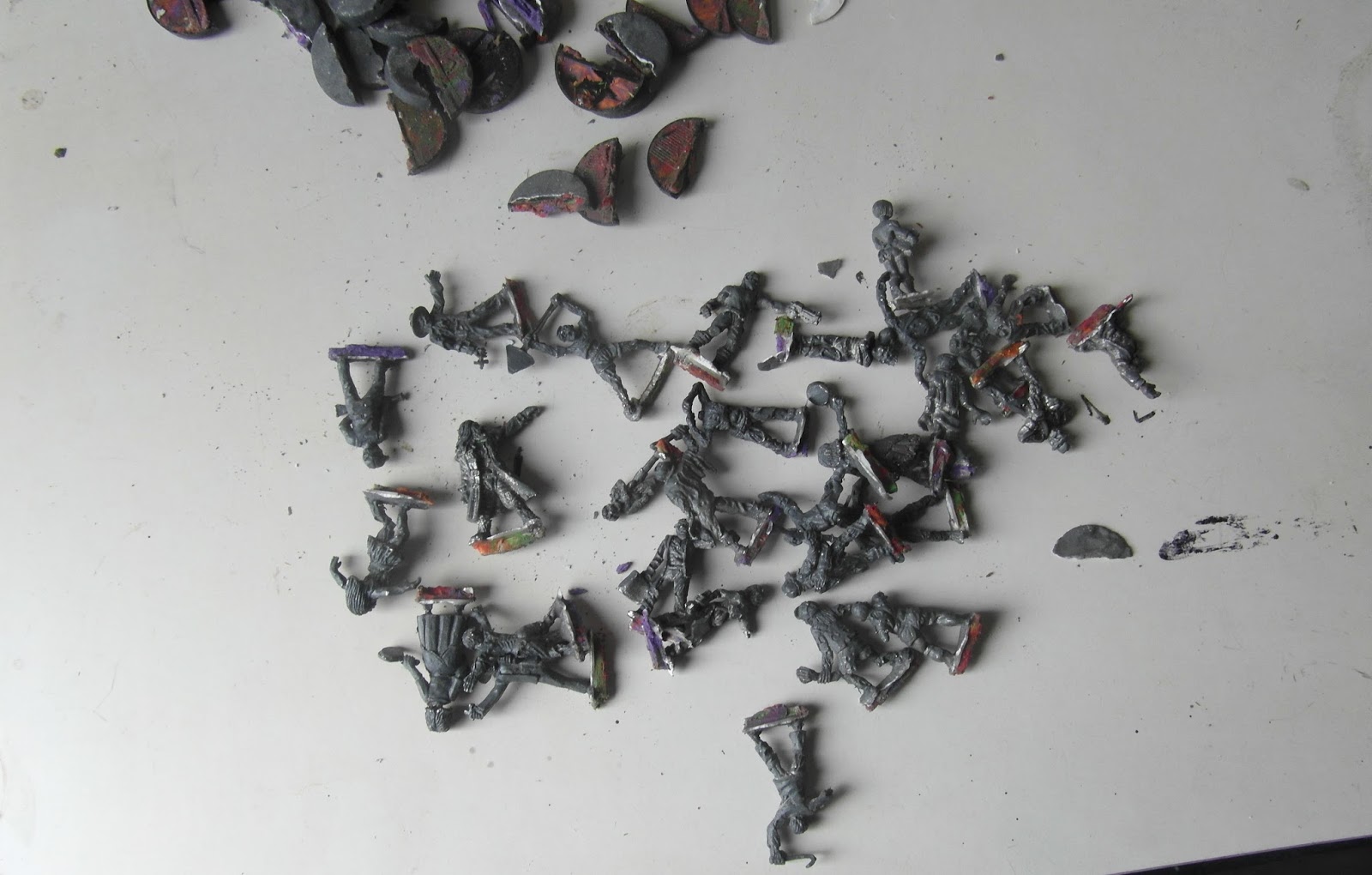 I haven't been slacking from my Zombies either, I painted up two dozen or more civilians and made a great start on the next wad of Zombies that are mainly Old Glory figures.
The picture on the right however, shows the first ever figures that I based for this project. They are zombie-smith miniatures, now released from the hell that was their slotta base. In between painting this week I'm hoping to mount these on my preferred 20mm bases using either washers or pennies.

That's it for another week and as always your comments are both welcomed and appreciated.