The Good, the Bad, the Ugly and Beyond ! 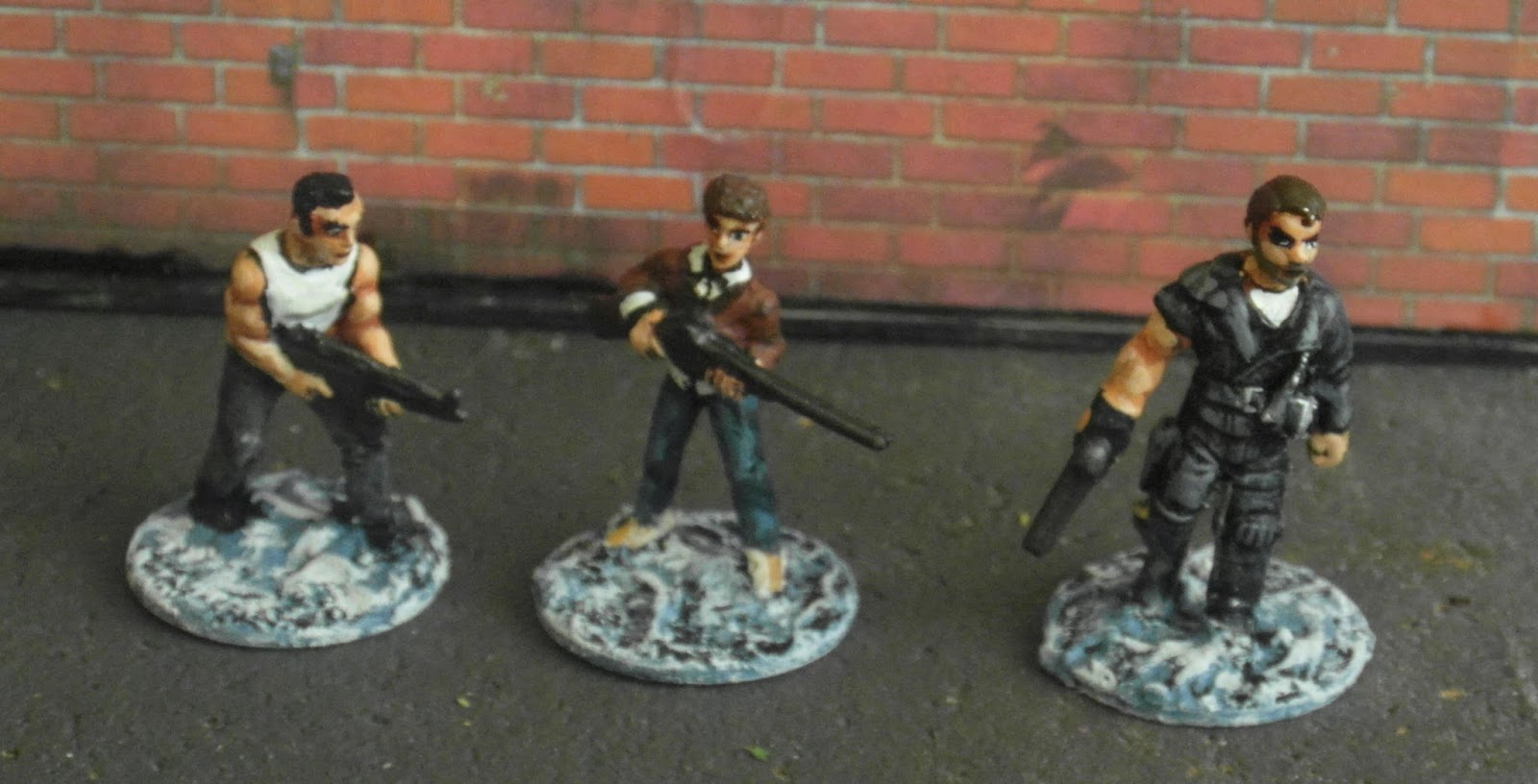 Well I've all but managed to keep up with my self imposed painting/building regime of an hour a day, except it's been all painting.
Unfortunately I've had some very mixed results hence the title.
Firstly The Good:
The figures in the first three photographs were all painted by fellow blogger Bryan/Vampifan and given to me as a present. 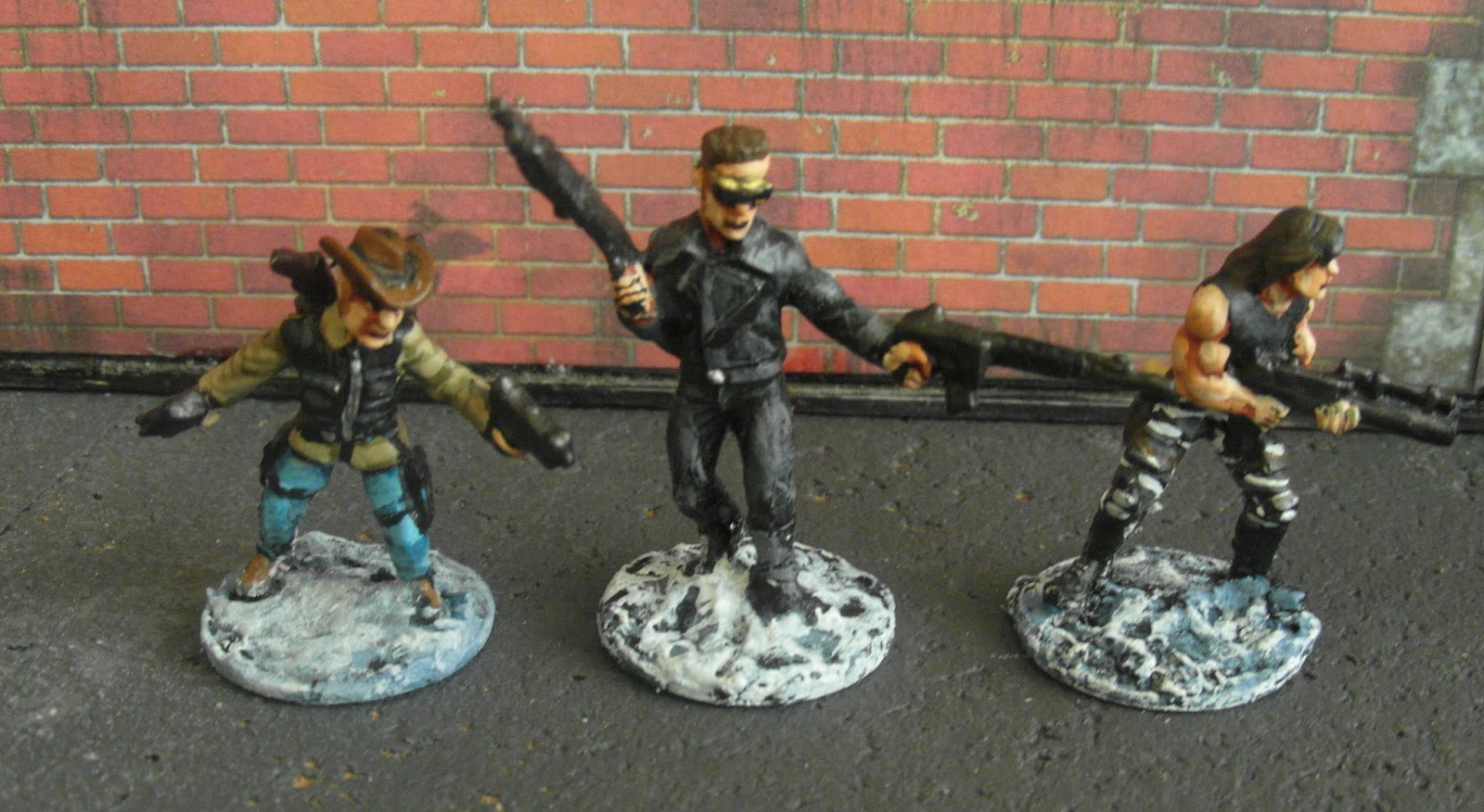 The two of us email one another regularly and I think he sent them to me at a period when I was feeling very low last year. The painting is of course to his usual high standard and he had the forethought to put them on bases using blue-tac as he knew I'd be putting them onto my 20mm washers. I believe that they were all surplus to his own needs (they're swaps) but are a very generous gift imo and did cheer me up no-end as they were completely unexpected. 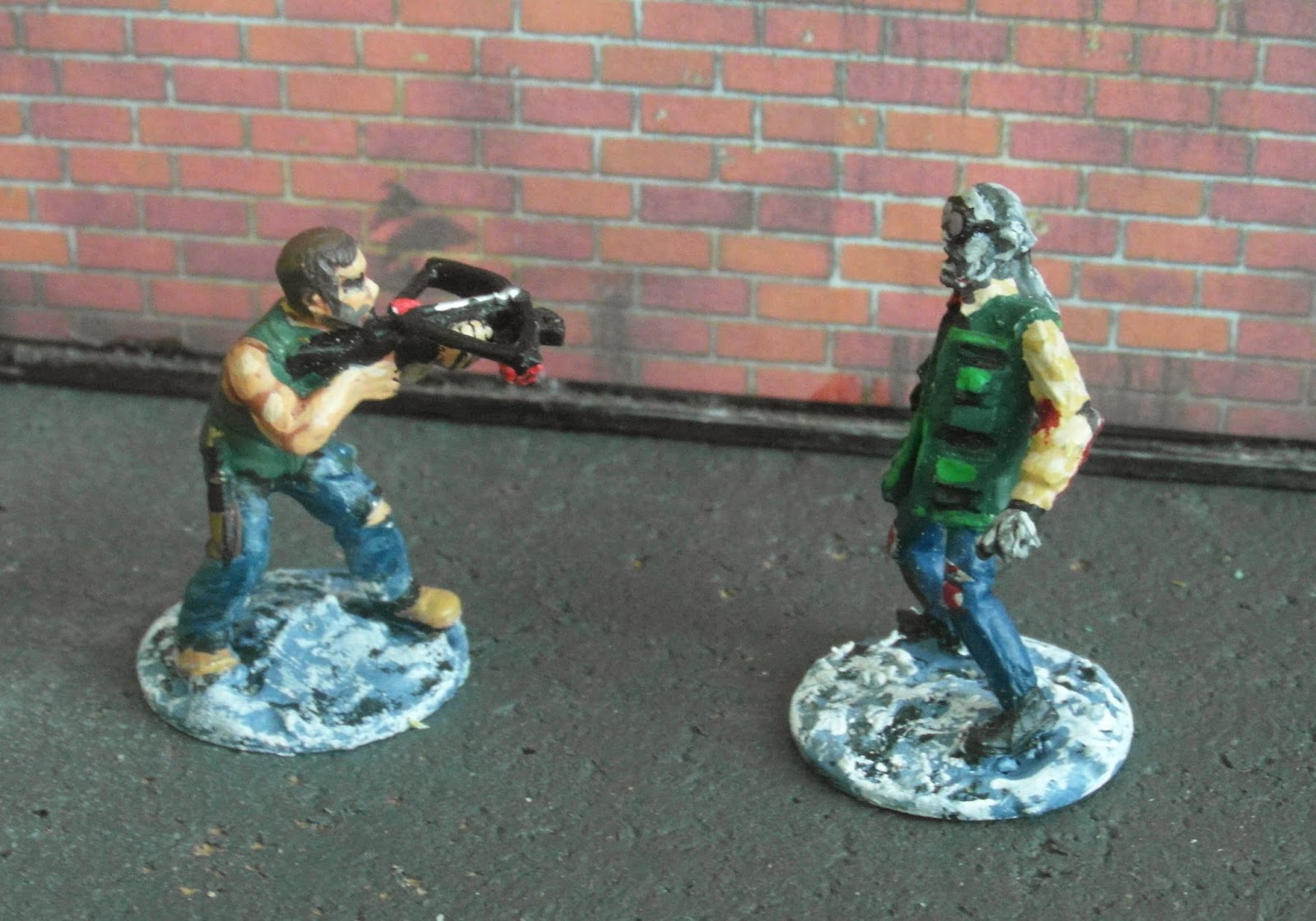 Most of you will no-doubt have realised that they are Studio Miniatures' figures and are miniature versions of well known fictional personalities.
The few I think know of are (from l to r and top to bottom): #4 and #2 Not Woody Harrelson and his sidekick from "Zombieland", #5 Arnie as not the terminator (?), #7 Not Daryl from "The Walking Dead" and #8 George Romero as a Zombie.
Whilst I'm not a big fan of Studio Minis' survivor figures they do have some of the best zombies (if not the best) available. Having said that these are among the best survivors I have ! 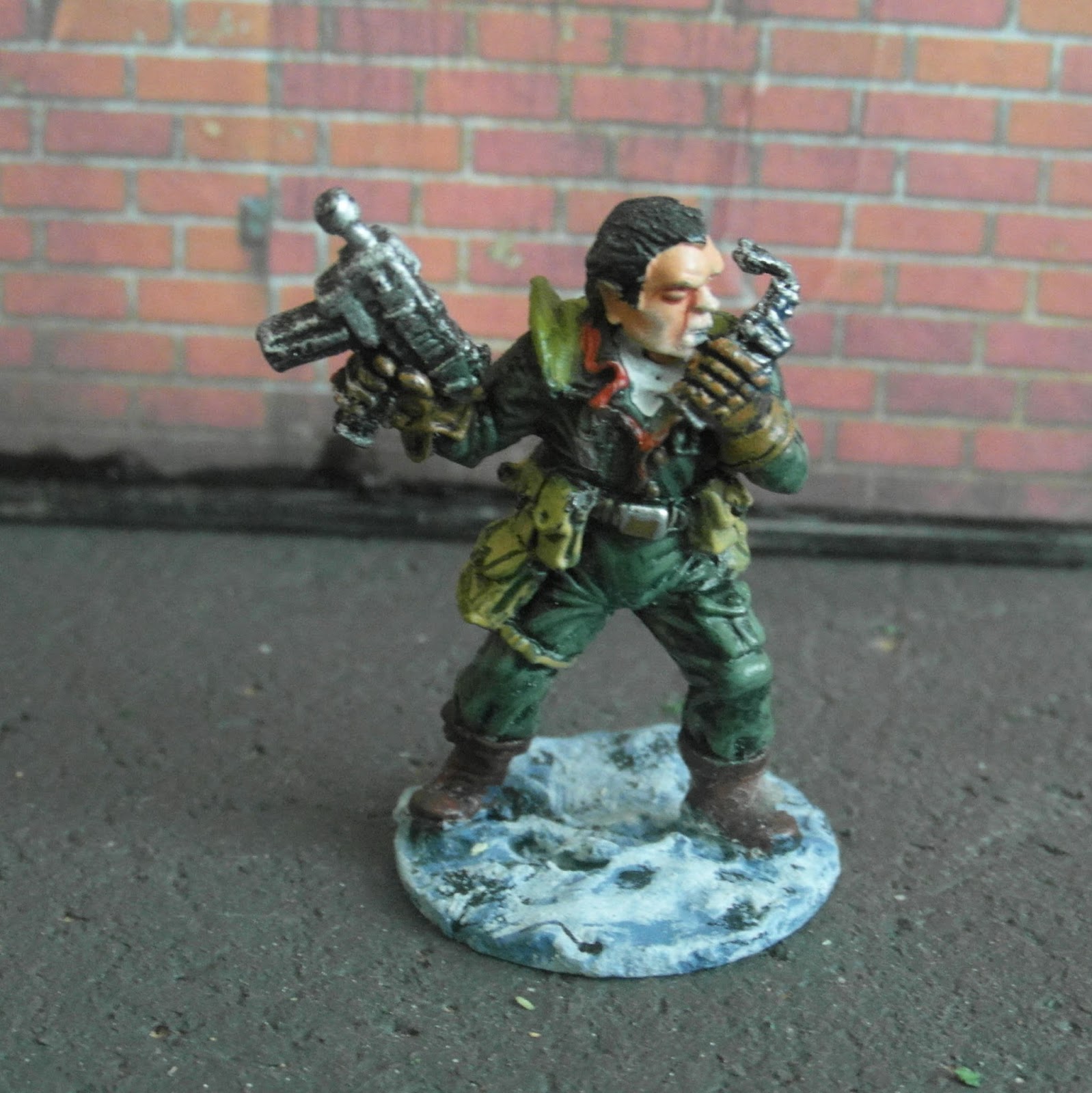 The final figure is yet another that I haven't actually painted (all I have did was base all of these).
It is an EM-4 miniature from one of their painted metal figure ranges (I forget which), for some reason he was omitted when I'd based the others previously.
When I bought these they were a mere £12.50 for five painted figures (with five 20 sided dice too) and is a far better paint-job than I'd anticipated (for the price).
The customer service from Em-4 was top notch and I can't fault praise it enough.

Next then, on to The Bad:
Finishing these was actually the objective of last week's efforts, but alas as I entered the final furlong I had one of those disasters that make you want to pack it all in and go home.
Unfortunately I was already home and could merely sit in horror watching the varnish I'd applied turn into a milky white coating over them. Undaunted by this set-back, I gave up on them.
I have since made a few attempts at re-painting them but I've also turned to the Interweb and used my google-fu to find some solutions to the problem and even though I've not tried any of the remedial courses at least I'm now hopeful of their recovery to mediocrity. 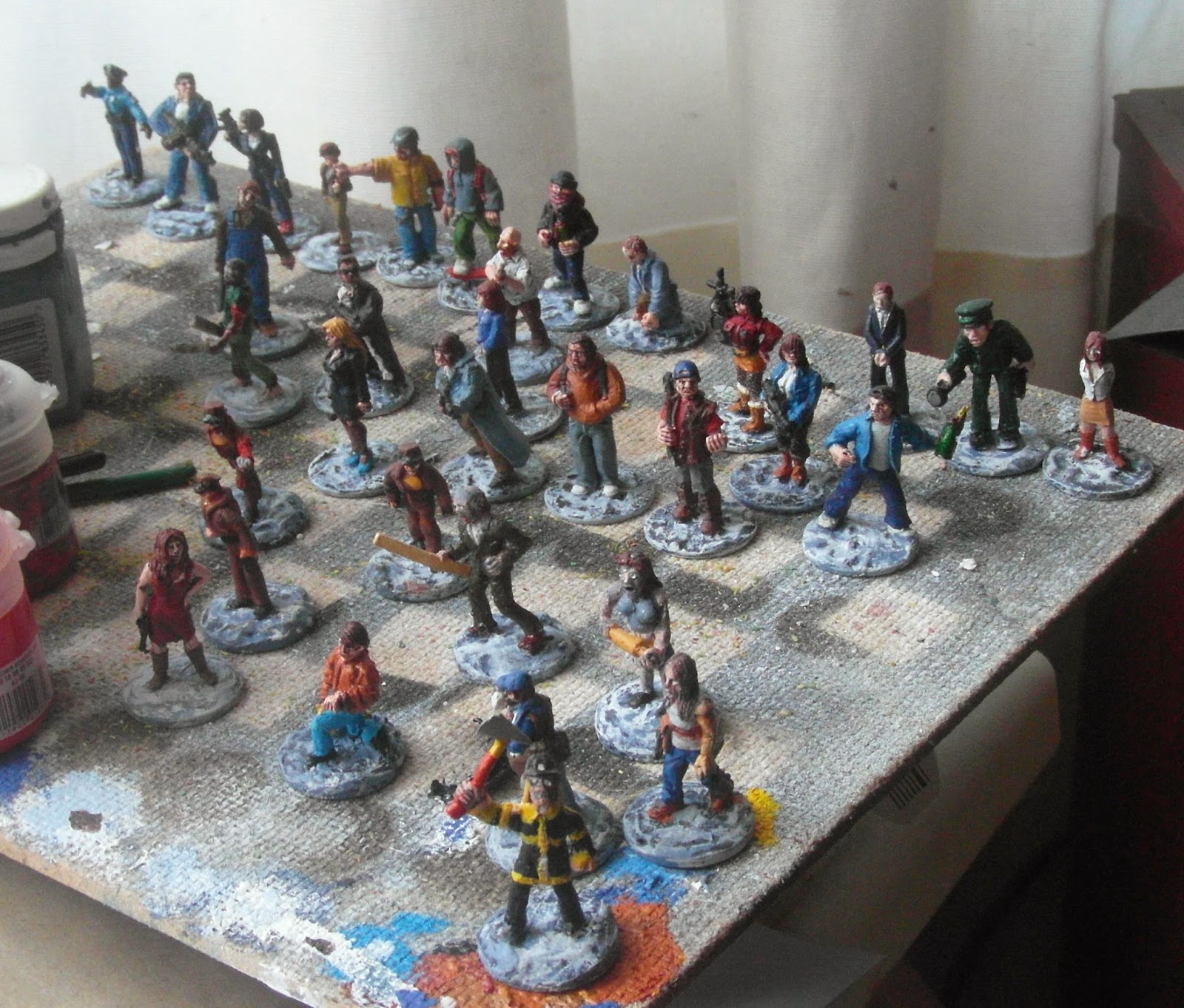 The Bad is merely my way of saying that the next batch are in fact unfinished although I have managed to base-up and apply a bit of paint here and there to a very mixed bag of figures. Amongst these are a few zombies (from the now defunct Mega-Minis and a plastic one from Wargames Factory. The remainder are civilians; some Foundy, Mega-Minis, Offensive Minatures (hostages), a single Hasslefree and four minis that are the 28mm counterparts of "The Devil's Rejects).
(From the TMP forum page they're now available from Raven painting.)

On to Beyond !
This is my first ever attempt at painting one of GZG (Ground Zero Games ) from their Full Thrust range.
Whilst I've never actually had dealing with GZG, my son has and has had exemplary customer service from them.
It seems that from time to time you actually get a little more than you ordered from them as a thank you and there's not many manufacturers that do that !
I'm not entirely happy with the colour scheme yet and may "tart it up" a bit, but for the moment it's adequate enough.

I also have a part share in a long roll of "Space papery/vinyl stuff" as shown on here on the floor.
It's actually forty feet long and four foot wide and you can just see the "roll" underneath at the top of the photo.
Obviously from the photo you can see that it didn't come as a roll per se and was in fact folded over after it was wrapped around a sheet of card, but I think that the creases will disappear after being wrapped around a proper tube for a while.
It's made of a plastic stuff, thicker than a carrier bag or black rubbish sack but won't be as strong as one of the more expensive gaming mats that are currently available as a space warfare surface.
The price however is what really sets it apart from the other £60 mats, on ebay it's available from about a tenner, which, if cut into five 8 foot x 4 foot mats (or six 6 foot x 4 foot ones) works out at about £2 a mat ! At that price I think I can put up with the creases.

That's it for this week, as always your comments are both welcomed and appreciated.