I've managed to get a few figures to the stage where I'm happy enough to say that they're good enough for the table-top.
These four on the right are all Foundry figures from their Street Violence ranges, as with all foundry figures they're on the large side, even for a "28mm" figure, but they'll fit in with most of the other figures I have nonetheless. I selected these four from the  group as they could all easily double as rioters too. There is an excellent ATZ-BDTZ scenario with a riotous mob and these will fit the bill nicely as agent-provocateurs.

The next three are all Mega-Minis, whilst I'm happy with the Postman, I'm not that happy with the two delivery type chaps. I've painted these two several times and I've all but given up on them, so they'll have to do as they are. (The blurry photo is not to hide the awful painting, but is merely a reflection of the camera-man's skills -zero.)

It will come as no surprise to most of you that all of these are described as "28mm scale", of course we all know that there is no such thing.
The chap on the left is a Foundry, beside him is a Hasslefree and the three others are Offensive Miniatures (hostages).  The OM's are the most accurately proportioned imo,  though the Hasslefree Kev is also equally well proportioned, for a small adult or a teenager. (The Foundry guy to 1/60th scale woiuld have a hand with knuckles about eight inches across ! - but I still like him) 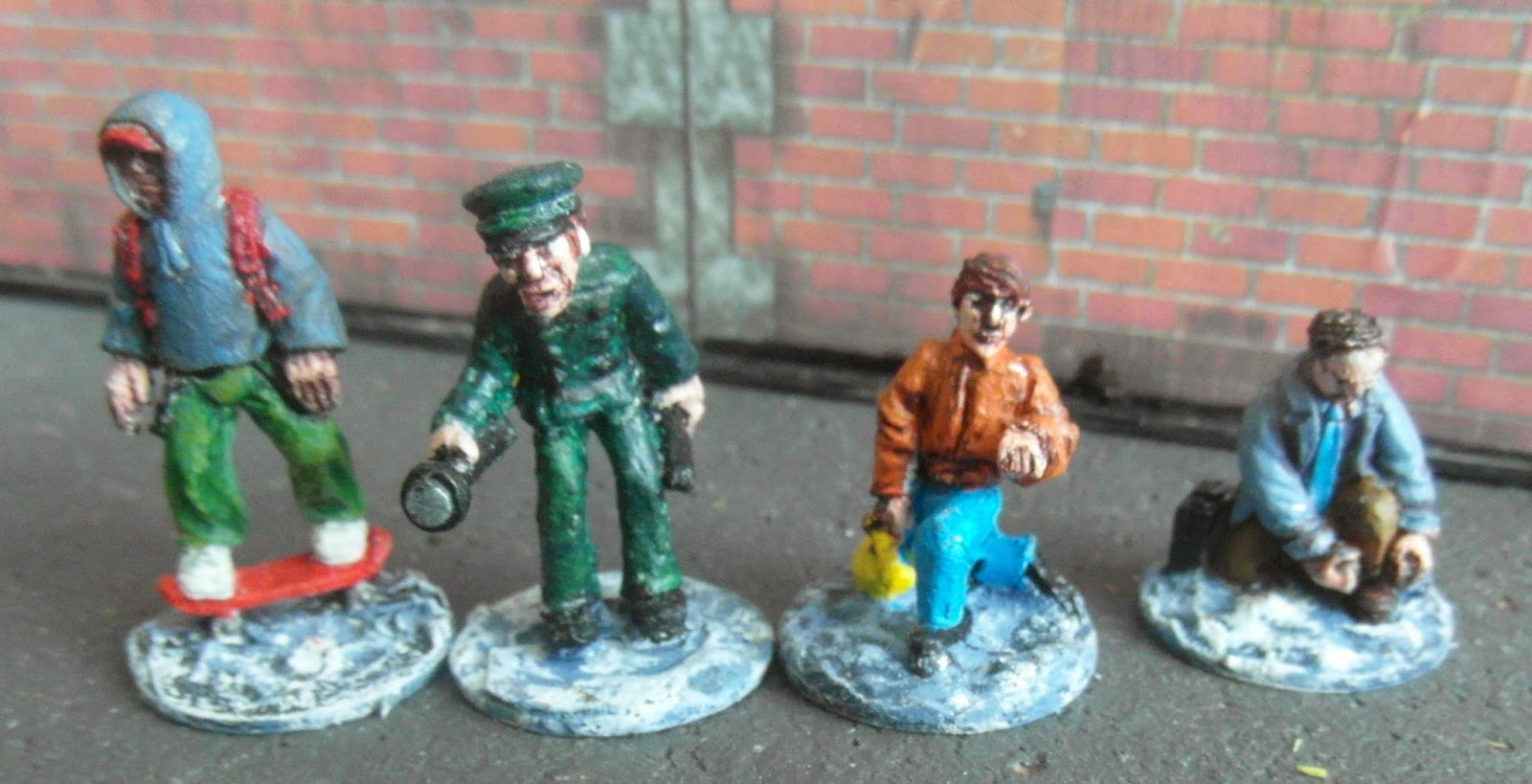 Last for this week are three more Foundry  (I think) and the nightwatchman type bloke is a Hasslefree.
Nothing much can be said about these four other than the nightwatchman looks like a giant against the Hasslefree figure above and I find kneeling figures aren't as usable as standing figures except in a set-piece. 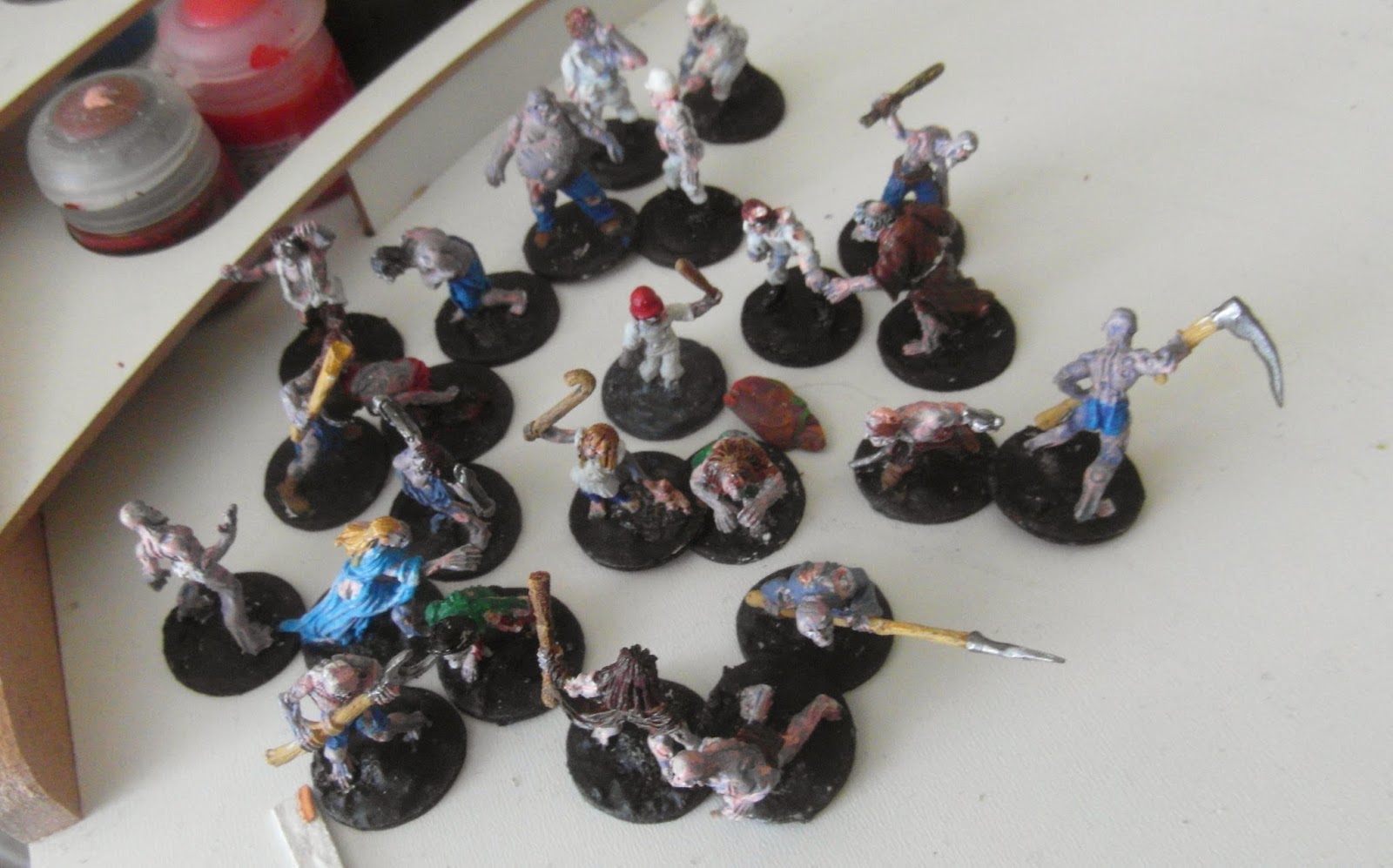 Having finished the troopers a while back,  I've made a start on the next batch of zombie. They're nearly all Old Glory (and look very medieval for the most part), but there are a couple of Mega Minis in the mix too. You may be able to see a young girl wielding a hockey stick (very vogue atm) and dragging a teddy bear/doll
and behind her is a basebal wielding kid too - these are both Mega-minis. 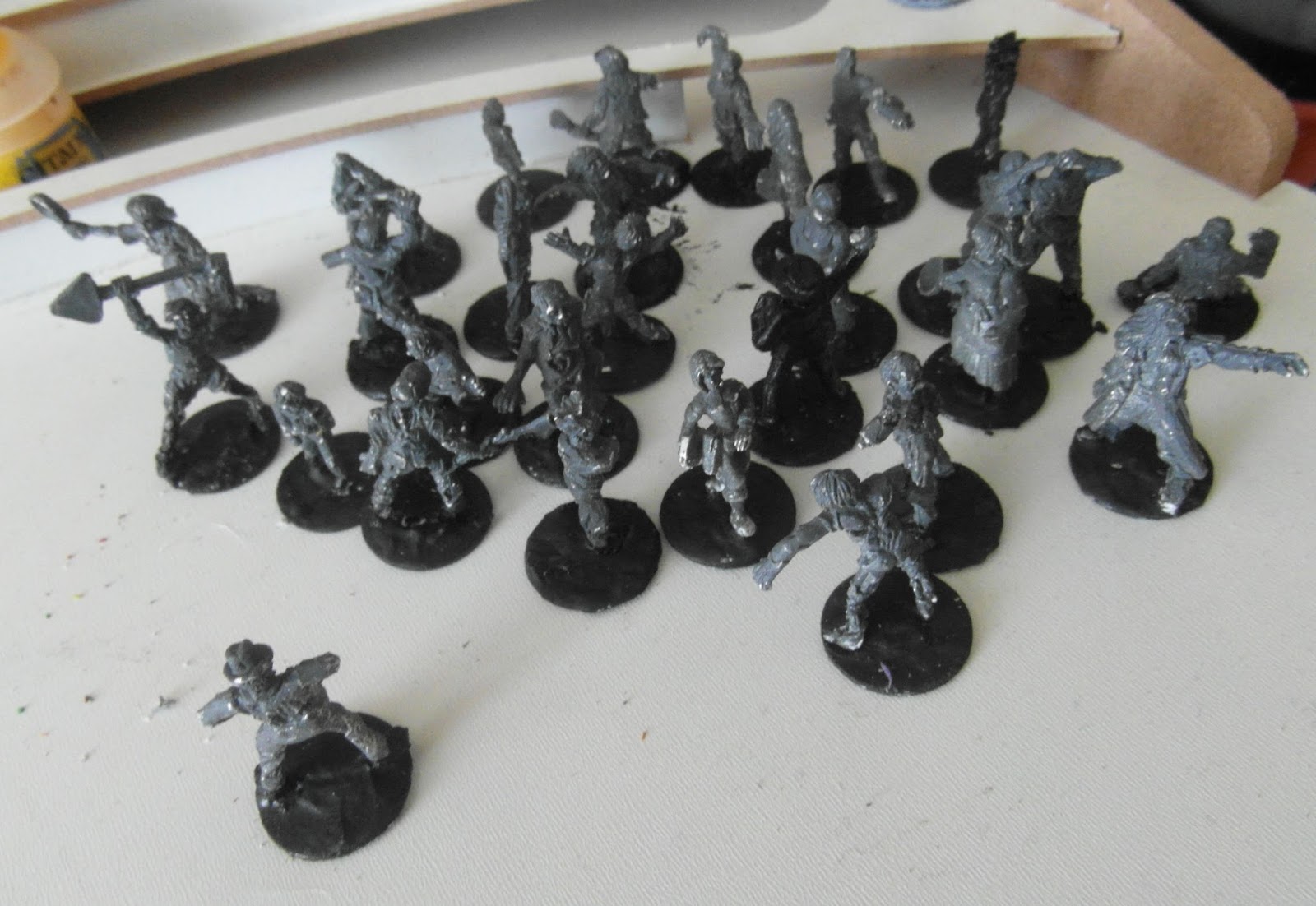 As I've started on this group of zombies I also needed another group so that there is a continuity in my production; the group that I pried from their abominable slotta-bases have now all been rebased onto washers.
This group is mostly Zombiesmith miniatures (and very good they are too). There are about twenty zombies and three pairs of survivors and their zombie counterparts. There are also a couple of random figures in the mix which could well be some very cheap Sci-fi figures  I picked up from goodness knows where.

I'll finish by welcoming my latest follower "Belique"and that's that for another week, except to say that as always your comments are both welcomed and appreciated.