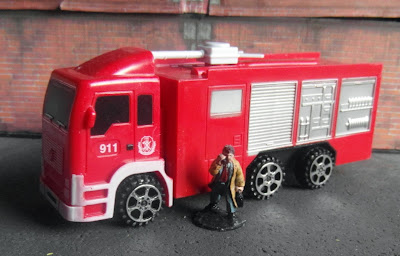 At the beginning of December whilst on a one of my regular hospital visits, I took the opportunity to visit Poundland, on the way there (and back) and I spotted a couple of fire-fighting vehicles.
The first vehicle, shown on the right,  was one I'd seen several months before but didn't get and had regretted it ever since. 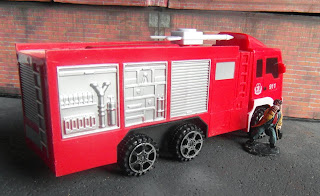 I've made amends now and have actually bought two !
The second one I have plans to convert at some stage.
The model is nothing remarkable but it does look about the right scale and size against this foundry figure (Sid seems to be off on a holiday break) 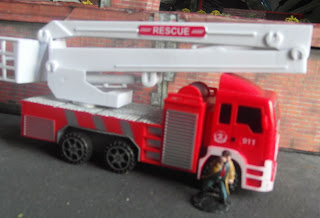 The second vehicle I'd never seen before but I was delighted with it and its extending cherry-picker type platform. 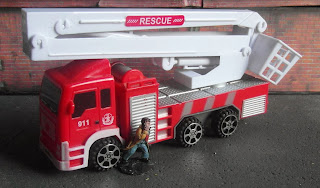 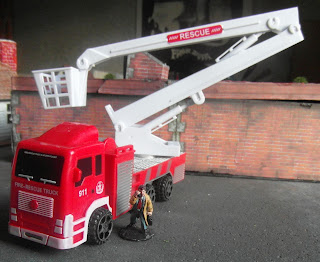 You can see on the photographs that the front cabs and the chassis of the vehicles are identical, which to me is a plus.


And just in case you were wondering, the platform does extend and also rotates. The platform cage itself will hold two figures on  20mm bases (just) but is far to narrow for any bigger base size.
There is a slight problem with the joints in the platform as they are very loose and any lead figure sitting in it will cause it to droop, but tightening it up a bit shouldn't be beyond the realms of possibility. 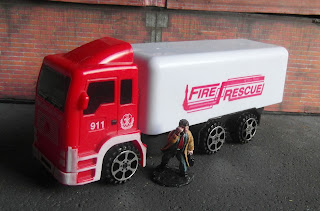 The final vehicle I picked up was probably the weakest looking of the three as it's just a plain white box with no details on it whatsoever other than the transfers (decals) on the sides and rear.
It wasn't on display on my first visit, but luckily was there on my return. 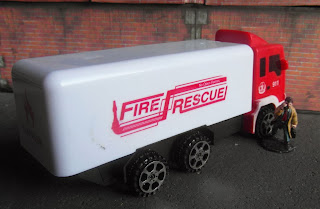 When I saw it, I didn't have much enthusiasm for it as part of the fire service, but did think it would be useful for something, quite what yet I don't really know, as it will need some work on the rear "box" to make it look useable in some form or other.

After I'd purchased these my thoughts did turn to the fact that I can't find any 28mm sized models of any firefighters although I'm, sure that there are some out there; the only ones I'm aware of is the dire Mega-minis  set. - so along with paramedics there is a gap in the market there.

That's all for this week and as always your comments are both welcomed and appreciated.