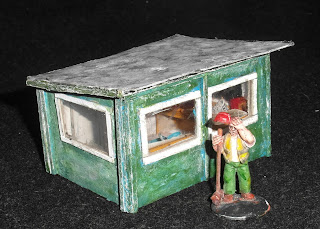 The work on my construction site continues (slowly); the basic structure has been completed  but each stage seems to take an eternity for the glue and paint to dry. It does however give me ample time to make a lot of bits and pieces to fill the site with.
First if the many additional bits that I've made is this site hut, which I showed the initial stage of last week and  is now complete. The structure is fairly flimsy, being made from some very cheap scrap packing card  and matchsticks.
The use of matchsticks (they're actually bought 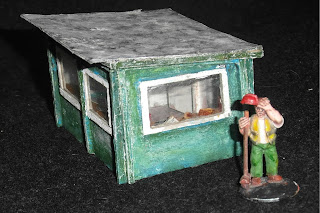 craft ones) determined the front height of the  building at just over 40mm.
The footprint of the building is about 2" x 3" (50mm x 75mm) which gives enough room inside to fit two figures comfortably even with the internal detail I wanted for this.
The windows frames are made from the same card, as is the roof (which overlaps the front of the building by about 1cm).
Even with matchsticks as support for the roof, it still managed to warp a little. 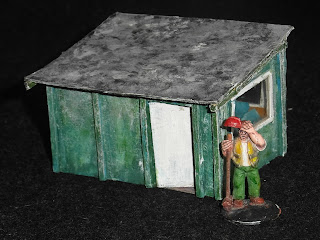 The rear door of the building does in fact open, though why I'm continuing to make more work making openable doors still eludes me, as I see them having little bearing on gameplay.
Again matches have been used as vertical support struts more for decoration than any true support worth.
Originally I had painted this building in blue, but realised I already had another fairly similar building in this colour and so It was repainted in  green (much darker than the photographs show).
The original blue paint can be just made out on the photos.
Another photograph showing the final side for completeness, note the roof  out of place ! 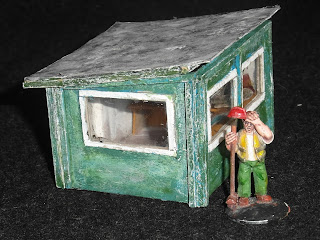 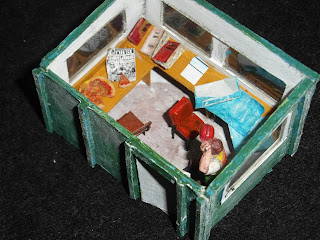 The roof removed showing some of the internal detailing.
I made the internal detail concurrently with the hut and fitted it after the hut was assembled, so it was a complete stand-alone piece in its own right.
The two chairs I have been messing about with for a few weeks and they're not actually glued in place  yet, as I haven't determined whether or not I'll do so.The "blue prints" and the crap of card that resembles a clip-board are the only extras that I made specifically for this. 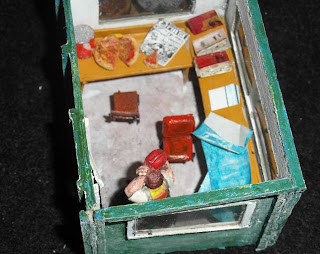 Another shot of the internals, showing the slope of the front desk slightly better (the side one is flat.
The rear wall has no detail on it at present and could really do with a chart or a H&S poster or some such as currently it's fairly bland.
The rear wall does have a coffee stirrer edge to the top for extra strength and as an attempt to stop warping.
All the windows have perspex panes to represent glass.
The model overall took a week to complete, but I doubt if I even managed an hour a day on it, as I was making many other bits as the same time. 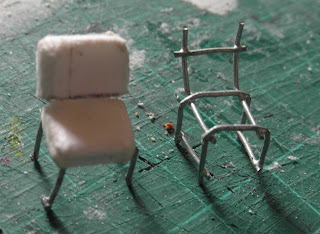 Finally, here's the initial stages in the two chairs you can see inside  the hut.
They may not be the most detailed in the world (Mathyoo), but I'm  quite pleased with my efforts.
You can just make out that one of the chiars has a very thin back and seat (card) whilst the other has a thick, cushion-like back and seat, made from plastic.
They were very fiddly to make, but at least I now have an idea of making some passable furniture. I'm also going to try and make a park-bench, using the same technique.

In other news, in case you haven't checked his blog lately,  Brian/Vampifan is now out hospital and in a respite home.

And that's it for this week, as always your comments are both welcomed and appreciated.