I haven't managed anything much of anything in the last week or so, so I've decided to update my DVD/Film section. I've added the following films in a more concise form on that page but here are some more detailed reviews than I'd normally give.

Zombie King aka Zombie Beach Party - (2003) An “Outlandish gore-filled zombie smackdown! ” was the accompanying narrative for this, unfortunately it was none of those. The story-line being vague at best but it was basically  a tale of Mexican masked wrestlers with some zombie moments thrown in. Score: 1/5

Zombie Diaries - (2006). “In the early part of the 21st Century, an unknown virus began spreading among the populace. Within weeks it had engulfed the entire planet...”, so read the pre-amble. The story follow a camera crew’s attempt to document the outbreak, which could have been an interesting variation on the zombie theme but unfortunately turned out as a stale and boring trek through many clichéd scenes. A poor British effort overall even though it did have its moments (few and far between. Score: 2/5


Zombie Diaries 2 - (2011) aka "World of the Dead: The Zombie Diaries". This film follows on from Zombie Diaries but is set three months later after the events of the first film. It still has the feel of a pseudo-documentary from the various characters POVs and is a far better effort than the first in this respect. This time though action centres around a squad of soldiers who meet with some of the survivors from the first film. All told it’s a much better film than the first, but not one I’ll be rushing to view again. Score: 3/5

Autumn - (2009) A film with David Carradine in can’t be that bad - right ? Wrong! This is truly a dreadful film even by poor zombie film standards. There is little if anything to recommend it. I was very disappointed with this film as the book has a lot to recommend it even though not amongst the better zombie novels out there. Score: 1/5

Eaters - (2011) An Italian film with subtitles, but none the worse for that.Whilst it won’t win any prizes it is nevertheless a fairly enjoyable romp (but possibly for all the wrong reasons). It is difficult to know whether its self-contained story is meant to be tongue in cheek or not. The two main characters are believable enough whilst the rest are great stereotypes. The story is easily followable, but I got the feeling that the apocalypse took place in a very small area of Ital, rather than being a pandemic Score: 3/5

Remains - (2011) The premise for this film is the usual “WTF everyone has turned into zombies !”, except of course the gallant band of survivors (who are holed up in a casino in Reno). The earlier portions of the film are much better than the latter parts where the storyline is stretched and the cast is thinned out or replaced. It had all the makings of a really good zombie film but that tailed off disappointingly quickly. Some good effects and some quite amusing bits though and whilst not on must see list, it is a cut of the rest of the “B” zombie films. Score: 4/5 for the first half and 3/5 for the second !


Zombie Flesh Eaters - (1979) The film started well enough, in New York harbour with a police launch investigating a drifting abandoned yacht. My alarm bells started ringing when I realised the cops were sporting an Italian flag from the launch. It also took a while before I realised that the film was dubbed. After the initial signs that this could go either way, it went the way most zombie films went – downhill fast. The mix of zombies (infected and long dead corpses rising from their graves) . Unfortunately I found that there was little if anything to recommend it. Score: 1/5 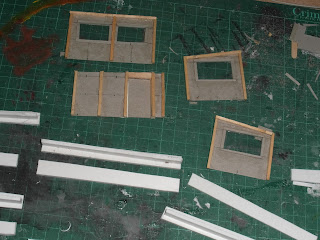 On a personal note, my after eye-op problems are slowly clearing (insert you own joke here about seeing the light at the end of the tunnel) which has unfortunately restricted me mainly to computer based activities and left me unable to visit Bryan/Vampifan these last two weeks, which I'm hoping to remedy soon (there is a recent update on his blog from his brother though.) I have still managed to make some progress on my construction site, little though it is. The photo shows the initial stages of a hut/site office that will appear on the model and some half-finished I-beam girders. The hut is obviously made from card, matchsticks and bits of coffee stirrer (of course), whilst the girders are plastic.

That's it for this week it just remains for me to welcome my two latest followers "Warlord Paul" and "Sean" - "Welcome Guys".
I should also mention that a lot of my followers have their own blogs which are well worth a look, that can be found on their profiles as well as on my own list of blogs that I follow. I also keep finding blogs that I thought I was already a follower of, but have realised that I probably linked to them from Bryan/Vampifan's Blog ! - No wonder I thought they hadn't updated in a while. My own favourite links is well out of date too with blogs that have come and gone, just another task to do.