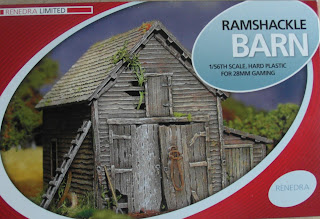 After my purchase of the Renedra "Ramshackle Barn" at the Durham Show four weeks ago I finally made the effort to build it. I haven't really had that much enthusiasm for anything hobby related lately so progress has been decidedly slow, but I have managed to force myself into about an hour's work a day on the Barn.
The plan for the barn was to have removable roofs and opening doors - With the front doors of the barn overlapping and askew, it didn't look that easy a task.
I also wanted to have some internal detail in the 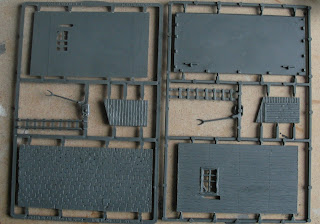 building and provision for figures to use the upper front and back hatches.
The two sprues shown on the left are identical (one being the reverse side of the other), which on first glance seemed OK until I realised that the side lean-to shed door has no reverse and that the other end of the shed will have a door on the inside that will lead to nowhere in particular.
The lean-to roof  (top right in the photo below) would also need an internal brace to allow it to be removable in play and not slide off down the roof. 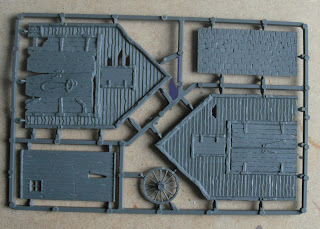 The main doors had to be cut from the front and rear walls of the building then they had to be further cut into two doors. This was not a problem with the slightly narrower  rear door,but the overlapping front doors had to be delicately sliced across the door. (where the overlap was there was actually a fairly substantial thickness
to the door which was a great help). The front and rear hatches also had to be cut from their respective walls.
If the lean-to was to have access to the main part of the barn then one of the side walls had to be cut to accommodate that too. 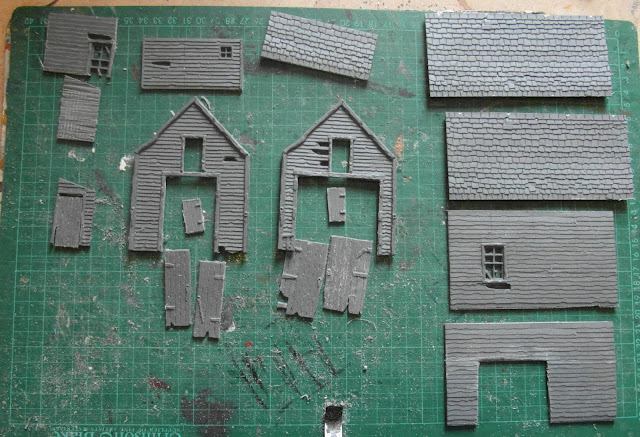 Above are all the pieces cut from their sprues and the individual doors cut from front and rear walls.
The lean-too shed "ghost" door has been filed down in an attempt to hide its origin.
The side wall where the lean-too will fit onto has had a section removed which will allow access to the main part of the building. - Note the removed section in the top left of the photo, I used the window frame part of the cut-out for the internal frame of the window, although I also had to add a lintel as the cut couldn't have been any higher because of the height of the lean-to.
The front door had the (what I considered to be) awful piece of "rope" removed from it. It wasn't until the final stages of this build that I noticed the gravity defining piece of chain on the narrower rear door and it was left as it was. If I had of noticed it at this stage then I would have removed it too. 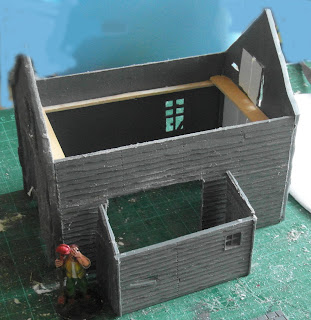 This view show the model roughly assembled (specifically for the photo), the lean-too still hasn't been attached, but the doors are all in place.
The internal top floor of the barn proper has had the supports glued in place. The lengthways beams are coffee-stirrers (of course), whilst the two shorter widths are lolly pop sticks.
At this stage I hadn't decided whether or not to have a full internal upper floor  (removable) or not.
I resolved eventually to have a two part upper story, so basically a ledge at each end, this would enable figures to be placed aloft and with the gap in the middle I would still have access to the lower part of the building. 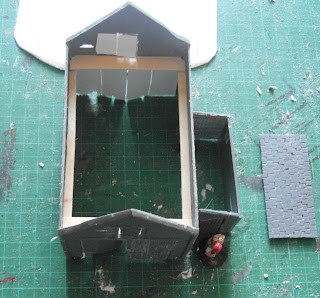 This view from above the model shows the plastic tape I used for the "hinges" on all the doors well and gives a better idea of the upper floor's supports.
The large piece of white plastic that can been seen in both these last two photos is the base for the model. It's quite a substantial thickness and only slighlt large than the model itself. The edges of the base have been chamferred.
Eventually I was satisfied enough with the final filing and fitting of the relevant pieces and glued the lean-to to the side of the building.
The main roof parts were glued together and some supports for the door hinges were  also
glued into place. 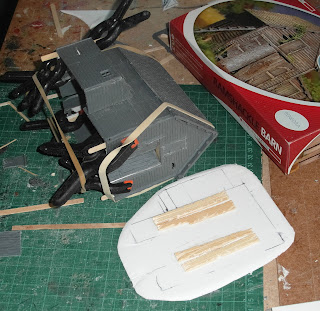 A this stage the various bits gluing were held in place with some clips and rubber bands.
The rubber bands were specifically used for the roof, as it not only had to be removable it also had to fit in place and the two halves had to line up.
In the photograph can be seen the whole base  with a basic outline of where the model will sit. The four pieces of wood (lollypop sticks again) are cut to length for the upper "floors".
Before the whole thing was was ready for undercoating, I added a few more features.
The first was a small porch-type roof over the lean-to door, made from a part of the discarded wall. Secondly I cut a couple of the transoms out of the large window so that I'd end up with just four "panes" and did the same to the cut out window frame. A piece of perspex was glued between the two to represent glass and the inside window had a lintel made from a bit of scrap.I also made some very thin frames for the inside of the loft hatches.
All the completed pieces were then undercoated with matte black spray (Poundland's best) and left to thoroughly dry.
By this stage I think I'd spent about 6 hours doing the bits and pieces above over the course of several days.

That's it for this week, next week I'll hopefully be showing the final model, because other than some internal  detailing and a little painting (aarrgh) it's all but  done.