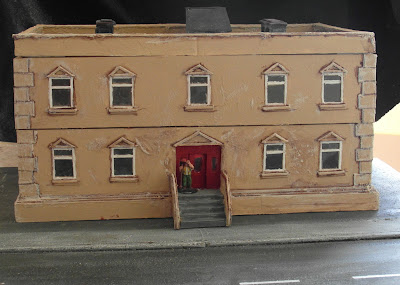 It seems I started this build way back in early September 2012, (and it's still not finished), but as always I hadn't finally decided on one or two aspects of the build.  I always intended to have some internal detail and that plus the decision of roof access delayed me a lot whilst I wrestled with the decision whether or not to have a staircase up to the roof or a ladder to a hatch (like in my supermarket). As you can see from the photographs I plumped for the former; it gives the roof a more interesting aspect with the roof exit structure.

Here's a close up of the roof, showing the rear of the roof exit and the HVACs I showed in blog last week.Rather than a single central HVAC unit I opted for two, it provides for a more interesting roof space and of course more cover for those roof-top battles. 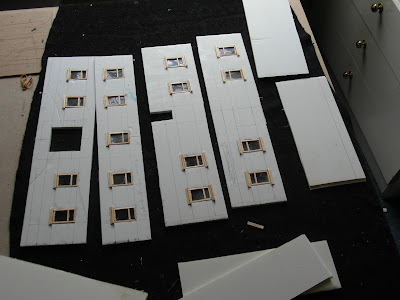 The structure itself is basically a box built from foamboard.
There are windows in the front and rear of the building, I'm sure I had a good reason for having no windows in the sides but whatever the reason was, it's now lost to the mists of time.
Lintels and sills were either made from card, matchsticks or stirrers and various combinations of all three.
The photo on the right shows (from left to right)
Ground floor front, upper front, ground floor back, upper floor back and finally sidewalls. 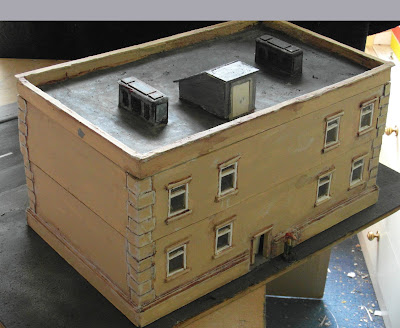 Here's the rear of the building, showing the roof exit and rear door, both as yet unpainted.
The "plinth" surrounding the base of the building was a complete pain to make mostly due to the amount of strips that had to be cut.
Base measurements are about 16 inches by 10 inches (including the base) and the base surround itself is about 1 inch high. You get a good idea of the size of the thing from Sid. The height of the building (to the parapet is about 8 inches. (That's 400mm x  250mm x 200mm for those of a metric persuasion) 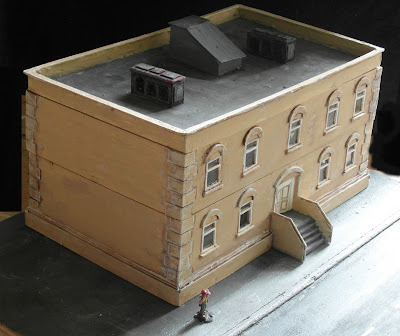 Final view, just to show the remaining side wall.
Early in this build I'd decided on the colour scheme  not being grey as I thought that I already have sufficient grey from the terrain boards and I wanted a brighter colour.
The colours I used came from B&Q
from their selection of tester pots (Acylic emulsions).  I bought two of each of three colours (in a buy three for the price of two deal).
Unfortunately none of the three were quite what I was looking for, but by mixing two of them together  I got the result I wanted (the colours were Sunflower and Wholemeal)
The third colour was Sandstone and was far brighter than I wanted, but I have used it as a highlight and I'm intending to use it on my "Sarrisa" residence.

That's it for this week, over the next week  I'll be having a major tidy-up in my wargames room and I'm hoping to be able to put out all the models I've currently made.
And for those of a detective disposition there is a bit of a mystery to be solved from the colour photographs

The painting has all been somewhat rushed so far on this build, but I did want to be able to post this, this week. I've fallen behind in my self-imposed schedule even more so that when fellow blogger Mathyoo (blog) visited but mostly because of an early arrival.
I am again a grandfather, this time to my eldest son's son, all three of their family are fine and well and like me a bit surprised that my grandson arrived two weeks early.

Finally, let me welcome my latest follower who I believe is Cash1204, (there's no way of telling who joined when as far as I can tell) I hope you find something here to interest you. If I haven't already welcomed you then apologies and "Welcome"