I know I'm probably trying to teach Grannies to suck eggs but just in case you don't know what HVAC stand for , it's Heating Ventilation and Air Conditioning. HCACs are mostly to be seen in films involving roof-top chases and are both ideal cover for figures and help break up the boring expanse of flat roofs.
The top photo shows two of the card air conditioning units I've made. They're from either WWG, Twilight or Fat Dragon, but I can't really remember which.
The second photograph shows a homemade HVAC unit shown against the commercial one 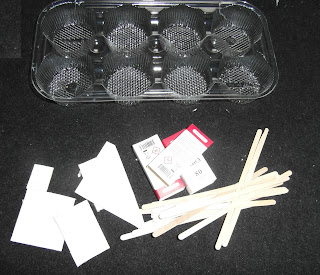 My unit is about the same size as the commercial ones at approximately 2cm x 6cm x 3cm high.
The original idea was to use the base of a plastic pork pie tray to substitute for the wire mesh, unfortunately this had many disadvantages. Firstly being see-through didn't help and secondly the glue I used seemed to have a very strange melting effect on the plastic.(I later found an exceedingly good cake tray packaging in red that would have helped). Other materials used were scraps of card, coffee stirrers and some boxes which were the "body" of the units, something akin to a normal matchbox could easily be used.

To give them some strength I cut and inserted polystyrene, before gluing the various bits to them. On the later units, because of the problems I'd encountered, I used wire mesh for the grills (the type you buy for repairing car bodywork)
The actual construction was simpleI glues a frame of strirrers around each on the long sides of the central core box and then added the mesh. Each end has a couple of cardboard bits added as does the tops of the unit. The vertical panels are once more stirrers cut to fit. 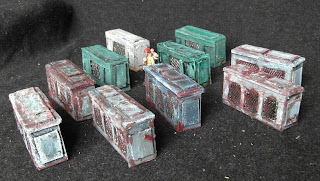 This last photograph shows the end view of the HVAC's and the card panel. The tops, as well as the fronts do have some variation as i was mainly using up scraps of card.
As usual, for some reason the photographs don't show the true colours of the pieces, it's not just my crap painting !

This week's blog post has been a bit of a filler as real-life events caught up with me last week, but next week I should have at least one or more of the four buildings I've been working on at a stage where I feel comfortable enough to post pictures. The internal walls and fixtures are however another matter, as I continue to chop and change my views about the buildings' purpose.

Finally I'll welcome my latest follower "Zed Monkey" whose blog can be found here and as always your comments are both welcomed and appreciated.