In between all those bouts of apathy, whilst waiting for glue or paint to dry I came up with this small bit of scenery for my games probably inspired by Vampifan's and another's Black Cat Bases fly tipping model (I can't for the sake of me find the reference to the other) 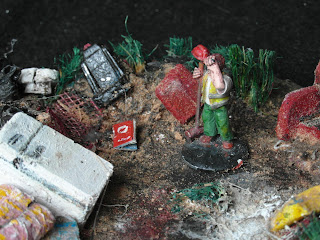 My model is about 8 inches by 6" (200mm  x 150mm), which is slightly larger than the Black cat one, but I did want it to look like it could also be used as cover.
The photographs pretty much speak for themselves and I've more or less presented them in a clockwise fashion from what I consider to be the "entrance" to the dump.
My attempt at a fridge was made from cork scrap, from my terrain board builds.
The book that can be seen was an earlier effort too. 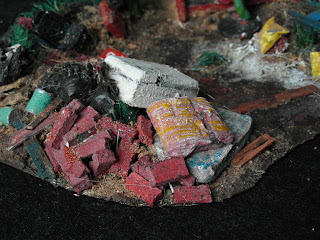 The next view shows a couple of old mattresses I made specifically for this .
The bricks were made a while ago from scraps of cork.
Some of my homemade plastic rubbish bags, which are dotted around the entire piece can be seen in the shot, as can a couple of tins, left-overs from my supermarket build. 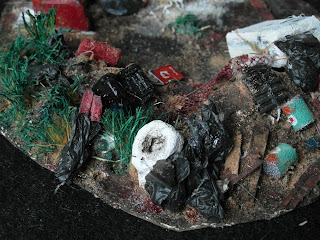 This next shot shows  a broken toilet (although the obvious break in it unfortunately can't be seen in this shot).

There are more rubbish bags than can be seen in both these shots dotted around. 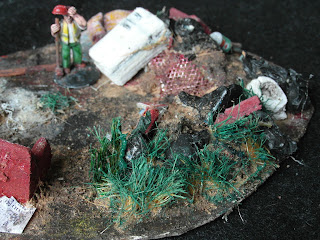 I've used some coarse string  (sisal or in this country often referred to as Post Office string) to represent the overgrown nature of this tip.

To fill out the tip area I glued down bits of polystyrene and glued cork filings over it. 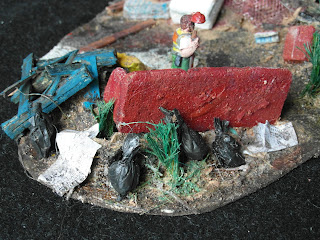 The next shot shows a sofa that I made especially for this piece, again using cork scrap.
It was made in an identical fashion as my other sofas and armchairs save for the fact that I made the seating have only two cushions instead of the three it should have had,
The missing sofa cushion can be found on the pile opposite the sofa.
This view also shows a couple of newspapers that I added as well as yet more bin-bags. 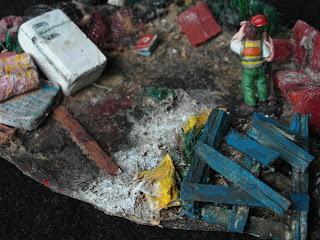 The photographs also show the smashed pallet that, again, I made especially for this piece.

The "tour" finally returns to what I designated as the entrance and again shows the broken pallet and a couple of bags spilling their contents over. Once more the bages were purposely made for this.
The pallet was made from matchsticks and coffee stirrers as were the bits of wood scattered around throughout. 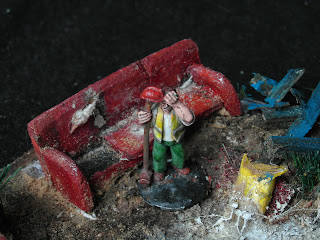 There are a few bit and pieces that can't be easily made out from the photographs, there's wire mesh, a tire, various bit of planking and a car seat too.
As I glued an item in place I put a little more glue than necessary onto the base then scattered some cork filings to "bed-in" whatever it was into the model.
I used dark colours throughout for the bulk of the tip but the scattering of what colour there is really makes it for me, as anything less would probably have darkened the model too much.

So, whilst I think the Black Cat fly-tip is indeed value for money, by my best estimate this cost me less than £1 in glue,materials and paint. It took about a week to finish but that was at the same time as I was building Skips, working on my next four buildings and HVACs (the subject of next  week's blog - probably, maybe, ish).
Time-wise - I reckon I spent no more than 4 hours making this, after all it's just a pile of rubbish.

Let me finally welcome my latest follower who could be Chris or David, but I'm at the stage now where I'm losing track, I blame the drugs or my age (probably both) or the fact that blogger doesn't help, nevertheless welcome guys, hope you find something here to interest you.

That's it for this week and as always your comments are both welcomed and appreciated.
Posted by Zabadak at 08:33