Well, OK, it's not really a rendition of my mate Stuart's shed and it's really my attempt at a run-down garage, but for some reason it reminded me of him and what I envisioned his wargame work/painting area to be like (a long time ago).

The building came about whilst I was watching the England v San Marino football game (it was a really boring first half) and I designed, drew out and cut out the whole thing by the start of the second half. (The second half was better and therefore work stopped on the model.) 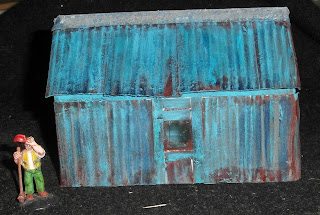 I wanted a feature on each of the four walls, so this side has a window in it .
The model itself is made of a fairly thin card frame to which has been added some thin crimped card.
I didn't want to risk my newly purloined crimper with the thicker card that I used for the shell of the building
The effect I wanted was that of corrugated iron sheets, so they were all cut to a uniform size (about 50mm x 30mm) and applied to the model. 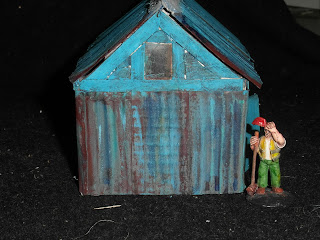 Both the windows in this model have been "glazed" with clear plastic. (I wouldn't want Van Fampi on my case now would I ?) 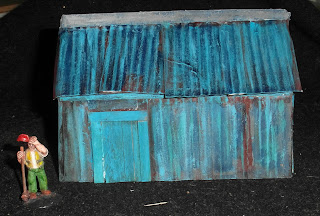 The final side of the building showing the side door. (yep, boring. -  I know)

The roof was made in exactly the same way as the main shell of the building, card then thin corrugated card on top, but it does have the addition of another thin sheet of card along the ridge; this is meant to represent roofing felt (possibly also  known as tar-paper, but don't quote me on it.)
It appears as a fairly uniform grey in the photos, but I blame the crap cameraman for that. It is actually several different shades of grey and has a texture too, created by a small amount of wall filler 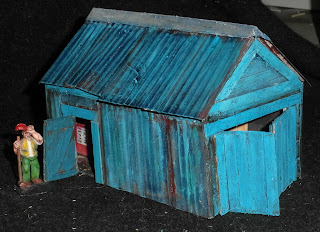 Another three-quarter view of the building showing that the doors are openable.
The doors are made from - yes, you guessed it - coffee stirrers.

Overall approximate dimensions are
Base: 75mm x 125mm
Height to roof:  50mm
Height to roof ridge: 85mm
I also reinforced the internal corners of the model (coffee stirrers yet again).


Time taken to assemble the already cut-out walls, roof parts and corrugations about another hour. 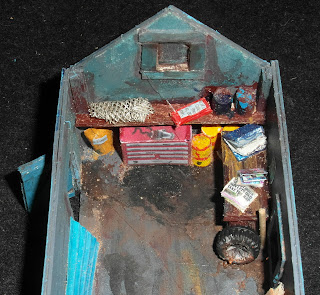 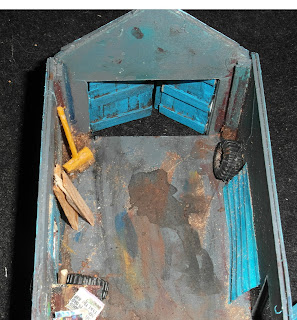 Here are two views of the inside of the building.

I had decided early on that I wanted the whole building to appear fairly run-down, both inside and outside, so the inside got a similar treatment to the outside.

None of the walls were actually fully painted in any particular colour, but as i used paints for one thing or another, whatever was left on the brush was wiped off on the inside walls.

The inspiration for a lot of the inside detail came from Zombietown (http://www.skankgame.com/zombietown.html), the sire where I really started my venture into zombie wargaming, even though I was looking for ideas for my then gangster project.

The stains on the floor and the accumulated muck in the corners (dust from filing cork) all add to the overall  "lived-in" look.


This next view shows many of the bits and pieces that I used to detail Vic's Gaff. 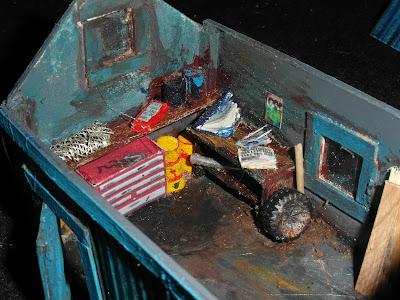 The workbench is four pieces of card (top, two sides and a shelf).
The shelf has a piece of piping on it, which was cut from a skewer I had used to stir some silver paint with (god know when). On the bench is a book, a newspaper and some "gentleman's reading material", scratch built or left-overs from Nipper's Newstand (March 2012's blog, as is the poster above the bench.

The shelf on the back wall was a piece of card on which there is a box (scrap card) a couple of cylinders, representing rusting paint-tins and some wire mesh which I've used in the past for leaded windows. Underneath the shelf are three more slightly larger cylinders painted in red and yellow (a colour scheme I've seen used on cooking oil in my local cash and carry!) No doubt anyone familiar with WWG products will recognise their tool-box. Not shown in this photo, but fairly visible in a photo above is a sack I scratch built. 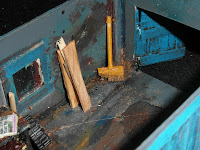 A tyre and a broom handle complete the props in this end (broom handle is a cocktail stick and the tyre is from a card racing car toy)
There's not much going on in the other end of the building, a broom and a few bits of wood on the side shown, another tyre and new piece of corrugation are on the other on the other side, they can be seen in one of the photographs above. The brush was inspired by Sid the Sweeper (the foundry figure I've used a lot for scale purposes) and like so many other things it's probably well overscale. It was made from a small piece of cork and a cocktail stick. 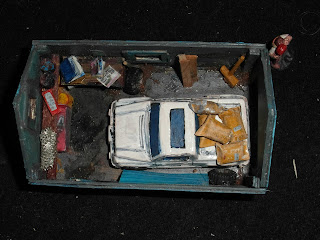 Finally here's an aerial view of the building, just to prove that I can in fact get a vehicle in it, even though its a bit of a tight squeeze.
Even with the vehicle in though you can see that there is still room left for figures to fit in, especially as I use 20mm bases (pennies or washers).
In the back of my pick-up truck are some of the sacks, which I scratch built after making the experimental one for this model.
Designing, cutting out, painting, making props and everything else that went into this model probably took no more than five or six hours total, but was spread over six days, so about an hour a day.

That's it for another week then and as always comments are both welcomed and appreciated.

I'll also take this opportunity to welcome my latest follower  - "Dark_Jober" to my blog, I hope he and all you others that peruse this site find something to interest or entertain you.
Posted by Zabadak at 10:13