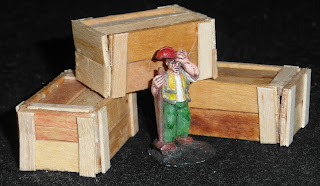 Following on with my current theme of using up my bits of scrap from other projects, here's my latest efforts.
As will be obvious, it's nothing fancy, merely some crates really crudely stuck together.
I made no attempt at squaring them off nor did I make any attempt at accurate measurements for them. Most measurements being done by eye.
This intial batch was made primarily from lollipop stiicks, some of which are of the actual used variety, whilst others  were bought many years ago for the princely sum of 67p (for 100 sticks). The sticks are about 100mm long (excluding the rounded ends) and about 10mm wide. In addition to the loolipop sticks I've also used those ubiquitous coffee stirrers.

This second batch of crates uses the coffee stirrers solely.
They're made in exactly the same fashion as the ones above and easier to make as the stirrers are thinner than the lolly sticks and consequently easier to cut.
In the future, if I make any more of these crates then I'll be sticking to the coffee stirrer variety. 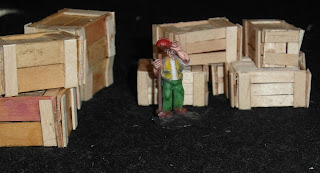 Here's a photograph of the two varieties  of crate side by side .
There is of course a very practical point for making these models, in that not only do they provide cover for our heroes but they also add to the scenic aspect of our games.
I've purposely left these crates loose so that they can be utilised in more situations and as can be seen in the photographs a two-high barricade of them can appear very substantial. 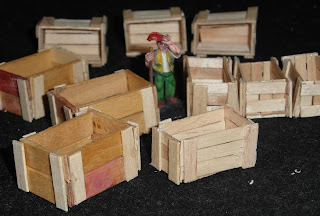 There is also another aspect to these that is not apparent from the other photographs and that is that, not only are they hollow but they also have a side missing.
I had the idea that once a box was opened it could be turned over to reveal what was inside - it was one of those thoughts that made sense at the time.
They can still be used as an indication of a crate having been searched though.


Currently in the pipeline:- Operation DFS Winter bed-sale is almost complete and should be blogged about next week; more Urban Road terrain has been started; my cottages ar3e currently having roof tiles added (individual tiles - they're no fun at all); work on my tenements has continued, but very slowly and I made a building during the England game this week (yes, I was that bored)  - I would have had it finished too if the match hadn't picked up a bit in the second half.

Well, that's all for this week, comments, as always, are both welcomed and appreciated.

Finally, to those I haven't already welcomed to my blog - "Welcome!" - (that would be aimed at my two new followers, Chris and Kris) I hope that you find something of interest here.