My attempts at card modelling have, to say the least, been less than inspiring. I, like many others I suspect, was seduced into attempting it by the modelling  expertise of others (I'm looking at you Vampifan).  The photograph on the right shows a typical box-type structure that is meant to represent a sofe (settee ?). Unfortunately it is typical of my attempts at card modelling - an abomination of something, but quite what remains unknown. 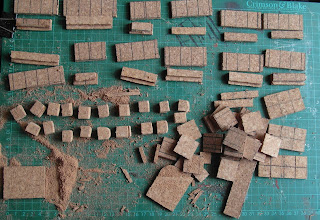 Continuing on from using my bits of scrap left over from my current builds, I've again utilised the scraps of cork and a few bits of foam-board left of from my urban terrain build.

The photograph shows all the necessary pieces make some chairs and sofas with.

The dimensions for the sofas vary, depending on the number of seating spacess, but they are basically the same for all seating. Five pieces make up each piece of furniture; a back; two arm-rests, a base and the seating.
All the cork pieces are about 4mm-5mm thick. 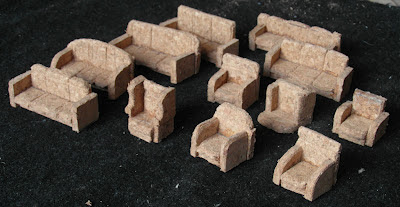 When assembled the first few prototypes looked like this:
I was very happy with the results and from the above photograph I'm sure you can make out my attempts at making a few different styles.
Altogether I had enough bits of cork left to make eighteen sofas (from two to four seat capacity and around about  twenty chairs.(You can just make out the black painted ones in the background)
The photograph above left shows the first coat of paints applied to them (actually two coats, as cork soaks up paint like nobody's business). When they've thoroughly dried out, I'll be giving them a dark wash and then some high lighting Some will be given a matt varnish, to represent fabric, whilst others will be given a gloss varnish to represent leather.

Finally just to show the comparison between my homemade sofa and my wreck of an attempt at a card one:


Well, that's it for this week, I hope you find something here ot interest you and as usual, all comments are welcomed and appreciated.