Zombie Fodder (and a sore finger).

I'm the victim of a sore finger, brought on by over-enthusiatic card modelling.
This last week I've been cutting out windows for three shops (they're all joined into one street hence they were easier to do together). Total number of windows is about 64, but each has an inside and outside sheet and each window has two panes to it for a grand total of over 250 cut-outs.  This doesn't include the doors of course; what is it with modern buildings that they gave to have glass doors  - it was much easier when they were all planked wood ! 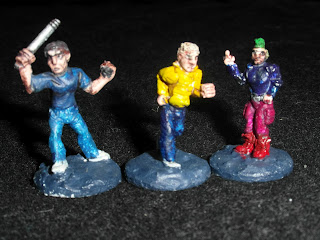 When my finger returns to something resembling normality I'll be carrying on with my card-building exploits.  In the mean time I've been putting some finishing touches (on computer) to the design stage of my next card model project.
Painting continues apace; I'm still trying to finish off my MegaMini civilians of which another three are shown here on the right.  The guy on the left is from their Thugs pack, whilst the others are from one of their civilian packs.
I'm guessing that I'm about half-way through finishing off all the civilians from this manufacturer and currently I'm painting up their civilians and zombie counterparts. 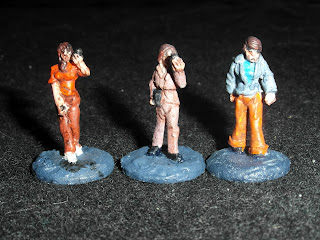 The three figures on the left (again all MegaMinis) are all female, though the jury is still out on her to the right.
The two left-hand figures are both using mobile phones (cell phones for our friends across the pond), but due to my usual inept photography skill it may not be that apparent.

The obvious shadow across the face of the centre figure is something I'll have to address in the future, but I'm still on Photography 101. 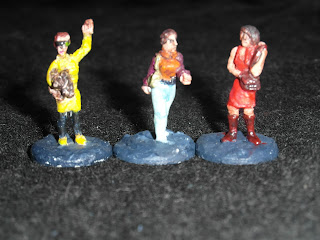 There are quite a lot of female figures in the MegaMinis range which is a good thing and they also probably have one of the largest ranges of children in their mix too.

The  photograph on the right shows three more of their civilians, although the left-hand figure is actually from their pack "Bureau". The figure itself has (had) probably one of the wierdest head positions that I've ever seen as can been seen from the  photograph on the left taken direct from MegaMinis site.  What she has in her left arm still remains a mystery to me, I had it as a bunch if flowers, a baby and a coat, but none of these fit closer inspection  of the mystery bundle.  Some judicious use of padded pliers put her head in a much more acceptable (to me at least) position. 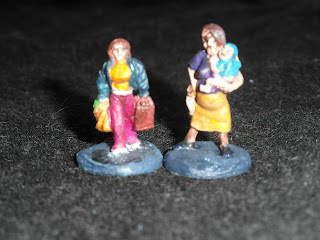 Here's the last two of my finished MegaMini females and they are two of my favourites.
It's a pity that my photography skills don't do them justice, but it does help when covering up my less-than brilliant paintjobs I guess.
The figures themselves are self-explanatory, a shopper and a woman with child, nothing new there as these poses can be found in other ranges (qv. Black Cat Bases), but there are some features that I particularly like about this pair.
Firstly the disparity in height  should be fairly obvious and secondly the "build" of them. The woman on the left is probably what I'd call a "standard" type for a figure, medium height, medium build etc. whilst her colleague on the right is taller and more heavily built, which all adds to the attractiveness of the sculp for me. 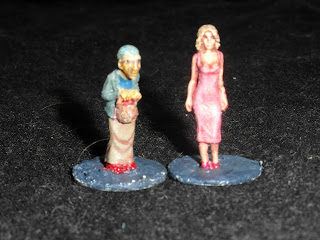 My last two offerings are both Hasselfree miniatures,  a company, which sadly, I've never had dealings with directly, although my son has nothing but praise for them and their service. These two were gifts from my son to me along with several other figures.  When I was considering buying from Hasslefree these two would certainly have been on the list, along with lots of their other excellent sculpts.  However when I considered that for the price of these two I could purchase about six MegaMinis figures, I had no choice (being the skinflint that I am).
Again this is an excellent example of diversity in figure heights and builds (as with many of Hasselfree's figures) and in this case also of age.  Grandma will be a welcome edition to my growing collection of older survivors (read zombie-fodder).
The tall elegant starlet is obviously the survivor who trips on her high heels and having no lines to read, continually screams (read zombie fodder). I did have to make a very minor repair to my "starlet" as part of her left arm between her elbow and wrist was missing, hopefully its hardly noticeable now.

Soon I hope to have some actual zombies and their civilian counterparts to show but in the meantime I do of course welcome and appreciate all your comments.

If you're new to my site and I haven't already welcomed you, then "Welcome", I do hope that you find something to interest you here.
Posted by Zabadak at 06:52