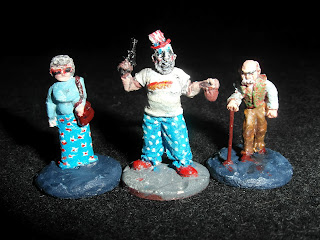 A small contribution this week to the growing population of my city.

The central figure is from " Raven Painting" run by Carl Robson and were bought off e-bay and represents Captain Jack Spaulding from the films "the House of 1000 corpses" and "The Devils Rejects".  I painted him up on a whim. I still have the rest of the gang to paintm including a non-clown version of Captain Jack.

The other two figures are "MegaMinis", from one of their specific civilian packs. 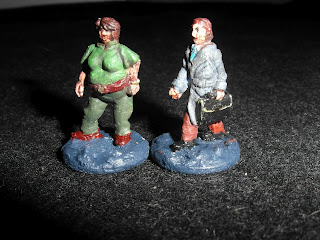 MegaMinis are not everyone's "cup of tea", but I like them, if only for their variety and as can be seen from the photograph. - Not everyone appears as a Hollywood starlet.

From my point of view, another factor in their favour is their price, at about $12 for 8 figures or around £1 a figure, I'll accept all their shortcomings (well nearly all). 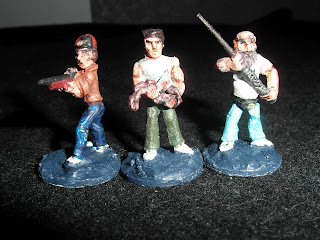 The next two photographs show five out of the eight  figures from MegaMinis' set labelled  "Thugs".

The figure on the left is armed with a single barrelled shotgun, the one in the middle has a length of chain and the right-hand figure has a pool cue.

The left-most chap's head is slightly larger than it should be and does give a cartoony style to the sculpt.  There are several other too in MegaMinis range of Modern Civilians that also suffer this afflicition, but as I couldn't do better, I'm not one to complain. I guess given time and energy, it would be an easy enough task to graft on new heads. 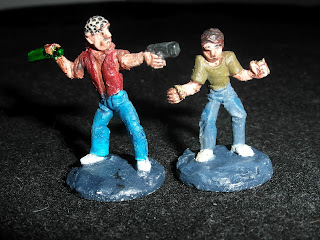 Fairly obvious what the left hand figure is wielding, but the right hand chap has a knuckleduster in his left hand.

I put it down to the ineptitude of the photographer that this isn't distinguishable.

All the Megaminis Packs have eight figures in them and the "Thugs" pack is no different, I just haven't got round to finishing the other three. I have however finished another dozen or so of their civilians and these will be shown next week 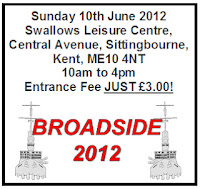 A quick final plug for "Broadside 2012" and if you want to know why I'm doing this, then you'll have to
last week's blog.

Finally, thank you for looking and all comments are appreciated and if I haven't already welcomed you to my site, then "Welcome !" -  I hope you'll find something you like.
Posted by Zabadak at 10:56