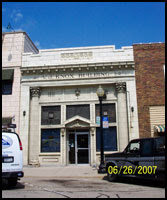 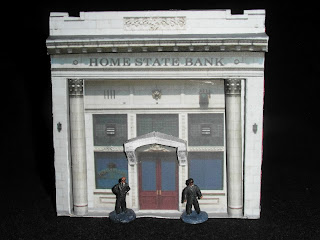 I came across this building (and several others) whilst looking for suitable buildings for what was an on-going gangster project of mine. This and the others have of course now been ear-marked for use in my Zombie Campaign Project.

It is  a free downloadable card model  from the Illinois Historic Preservation Agency.
http://www.illinoishistory.gov/ps/construct_mainstreet.htm

There are quite a few suitable models for download, other than what they call the "Main Street Buildings" of which this bank (one of two banks) is one. 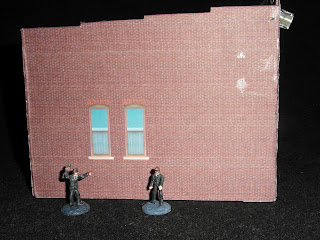 It's at times like this when my inept photography skills come in handy hiding many of the mistakes I made constructing this.
This photograph shows the left hand side of the building, at slightly less than half the length it should have been and about 3 cm short of the height it should have been 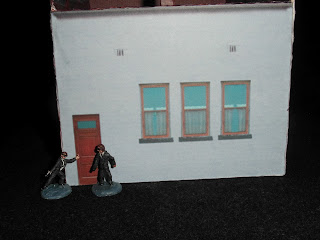 The stepped parapet of the roof should have had another 3 "steps" on it.  I went for a shorter building even though I had the printed sheets for the total length, which would have been a massive 13" instead of the 7.5" (about 19cm) it currently is. Measuring and cutting the right hand side from the front and the left hand side from the back (Doh!) meant I also had to lose an inch or so from the height. Which in turn meant the walls didn't match up with the false front of the bank. The front of the Bank is just over 6" tall (15.5cm), whilst the back of the bank tapers down to a mere 5" (12.5cm)  , which is still pretty imposing for what is purportedly a single story building.

The back of the bank has what appears to be a giant door, but it's an illusion caused by the skylight above the door; it could well have been a little smaller, but not much. The feature that interested me was the height of the windows, implying that the interior had a raised floor.
I had decided from the outset that this building would have no detailed interior although I had thought of making provision for one if at some future date I decided to build one (I won't), but I did  concede to making a lift-off roof. 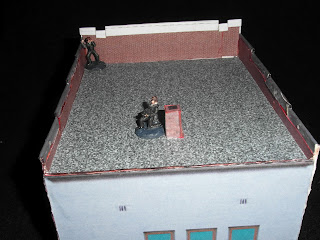 You can tell from the photograph the many problems I had getting the roof, the parapet etc. looking anything like remotely acceptable.
The roof itself is meant to be sloped, from front to back,  however because of the fore-shortened  sides the back was now too low and of course the reduction in height of the side walls also meant that there would be  a gaping white mass behind the false front.
All of these problems were compounded by me wanting a flat roof, rather than the sloped one - another schoolboy error as the sides now would also have great swathes of white card showing !
So, the roof and parapet sides were patched with brick sections from  the cut-off side walls.
It was all a sort of learning experience though, not to rush into things without thinking them through thoroughly as I'd normally do.

A few other random bits of information.
The footprint of the building is 6.25" x 7.5" (about 16 cm x 19cm), the models are approximately H0/00 scale and I had to scale the downloads. I scaled them to 150% of the original size, which may have been a bit too much.
There is no photograph of the right-hand side of the building as its pretty much a blank brick wall. The left hand side could just have easily been brick too as its real-life counterpart sits between two other buildings as can be seen from the photograph at the top of the page.
The figures in the photos are all MegaMinis and are from their Modern Civilian range entitled "The Bureau"; they're not the best, even by MegaMini standards, but they'll still get used. All the standing figures are well over 30mm tall when measured from the bottom of their bases to the top of their heads.


Comments, as always,  are welcomed and appreciated.

It is of course always nice to see new followers and if you haven't already been welcomed, then "Welcome",  I hope you find something to interest you.