It's been a while since I last had a rant and rather than show my latest MegaMini civilians I've decided to have a general comment about some of my news and views.

Hot off the press comes the news that I've won a competition, nothing major but rather a friendly competition run by Irqan over on his blog-site Plastic Zombie. (http://lrqan.blogspot.co.uk/). Briefly, the competition was to guess which of four people on a photograph was the man himself and the tie-breaker  was a film quote.  If you want to know the quote that i won it with, then head on over to his site, you'll be more than welcome I'm sure. (Also look for his exciting zombie bat-reps - they're set in a prohibition style 1920's and are very entertaining!)

I've ordered and received another e-book: "The Infection" by Craig DiLouie (on the strength of his book "Tooth and Nail" - Highly recommended) from Amazon, I don't think I'll be disappointed.  Whilst in the process of ordering, it was brought to my attention that the third book in Mira Grant's "Newsflesh Trilogy" was due for release (7th June)

The third book in the trilogy is entitled "Blackout" and it's been on my want list ever since I read the first two in the series last year.  What makes Mira Grant's zombie infected world is its believability and even though it is set some twenty years after the apocalypse the zombie threat is still a reality.

I doubt very much if I'll be disappointed  with this third book of the Trilogy and I can't recommend the first book "Feed" highly enough.  If you don't read any other zombie novels, then read "Feed" (and "Tooth and Nail".

A comment was made on  a fellow bloggers blog about the size of a figure compared to a vehicle.

The vehicle in question was the Mystery machine I showed a while ago and the figure was a "Copplestone". 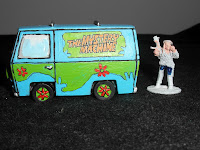 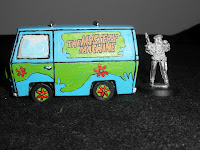 I've used two identical Foundry figures in attempt to show the crux of the matter.
Left hand picture, the figure has a washer base, whilst the right hand figure has a slotta base. 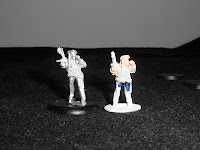 I think the photos illustrate perfectly one of the reasons why I hate slotta bases. 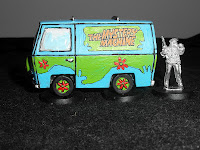 To illustrate the point further, how many gamers mount their vehicles on bases ? The photo on the left shows a more accurate representation of the comparative heights of the vehicle and figure, with the vehicle raised on slottas, whilst the photo on the right shows the two figures, with and without a slotta base, side by side.
I know which figure I prefer, but each to their own. As to scale - 28mm is not a scale ! - It really does annoy me that it is reffered to as a scale.  I ask you, who measures their height from their feet to their eyes ?  I take it that 28mm figures are roughly 1/60th scale, i.e. approximately 5mm to 1 foot (Only the Brits can mix and match Imperial and Metric measurements without blushing). If the average height of a man these days is say 6 foot (180cm) then the figure Mac Taylor from Foundry's "Juno's Crew" is over 7 foot tall! (probably along with many of the other "larger than life figures). I don't mind the differences in height that much, although a "28mm" figure  that is 36mm tall is pushing the boundaries a bit. 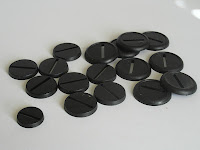 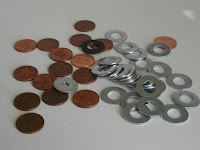 I understand the many uses slottas can have; that nice rim on the bottom can be used to paint on names, or be colour coded (for instant recognition of rank or whatever) and I use it for squad numbers on my "Blood Bowl" teams and squad identification on my "Space Hulk" terminators. The difference however is that the actual base is black as befits a piece/token for a board game.  I made no attempt to represent grass, rubble or space-ship detritus as there seems to be no point when you have that black rim glaring at you.
My preferred basing materials are shown above left, pennies and washers.  The pennies are slightly thicker than the washers(nearly double) but are cheaper.  The washers I got for £2 a hundred, making them double the cost, but  that hole in the middle allows you to mount figures designed for slotta bases, with a bit of judicious filing. Word of warning: If you're thinking of buying washers, avoid buying them from the chain-store DIY shops a pack of 10 M10 washers (like those above) can cost well over £3 ! Search out local hardware stores that sell them by weight instead.
Rant Over.

This week's has been a bit of a ramble and I haven't managed to even show my latest MegaMini civilians and "Bureau" that I've finished (for bureau, read Men in Black), so that will at least give me material for my next blog.
I purposely didn't say next week's blog as I'm attending a family affair over the entire next week-end - it's not just HRH that is celebrating a Diamond anniversary - so my blog may be at best delayed and at worst postponed.

Once more, thanks for taking a look; all comments, rants etc. are of course welcome and if I haven't already welcomed you to my blog then "Welcome and I hope you find something here you like".
Posted by Zabadak at 07:14