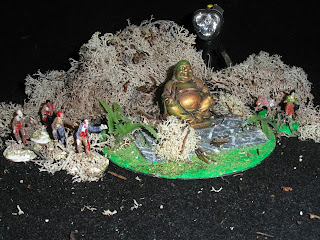 It's been another week of doing lots and finishing nothing, but the highlight of the week was receiving a parcel from fellow blogger Irqan over at Plastic Zombie.
The parcel was the prize in a recent competition he ran  and contained all you see in the photograph on the right.
There are zombies, both male and female and a zombie dog; a Buddha (on overgrown plinth) and a keyring.
The zombies, I think are from the game "Zombies!!!" and are 20mm (I think my eldest son has his eye on them as he has the game and all the add-ons).
The Buddha is an excellent piece of kit, eminently suitable for wargaming and a great addition to my Vietnam collection (again No.1 son is trying to inherit this collection too).  The lichen also came in the  parcel, probably as packing - but what a great idea as this stuff has been used by wargamers for years as bushes, trees etc.
The key-ring intrigues me; it's basically in the form of a searchlight (torch) on a tripod, you can just make it out in the top-right of the photo and has got me thinking about suitable uses for it ! -Thanks again Irqan !
Competitions seem to feature a fair bit on fellow bloggers' sites and it was only the second out of three that I've entered - I was robbed on the other two ! The first asked which single weapon would you favour in a Wild West zombie environment (won by someone suggesting two weapons) and for the third, the winner was declared before the deadline for entries !  Me bitter ? - Not really, it's all just a bit of fun.  I may have to run have  a competition of my own when I reach a significant point in my blogging adventure. 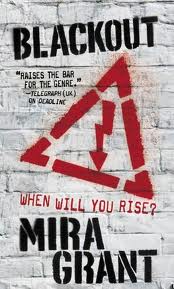 I was away last week-end, as I mentioned in a previous blog and with nothing better to do on the five or so hour's drive there and back (that's ten hours !), I read the third book in Mira Grant's "Newsflesh" trilogy. I've been looking forward to this for some time and wasn't disappointed.  As zombie novels go, it's top of the range and I thoroughly recommend reading the entire trilogy.
You'll not have seen it on my "currently reading" section of my blog as I really couldn't put it down once I'd finished "The Art of Zombie Warfare" and now I'm reading "The Infection".
I've updated both the Book reviews section and the DVD/Film section recently too if you want to see my scores and brief opinions.
A film that won't appear on my DVD/Film list is "Outbreak" (1995) which has a star studded cast and whilst it's a fairly old film I hadn't seen it until this week.  Taking the blurb from IMDb "Extreme measures are necessary to contain an epidemic of a deadly airborne virus.", which should sound familiar and is the reason why I mention it.  I enjoyed it immensely and it has many features relevant to the zombie genre.
It seem to be a trend lately both on the Blogs I follow and on "The Board of the Living lead" to show our workspaces and/or our gaming areas. 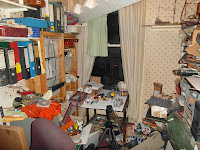 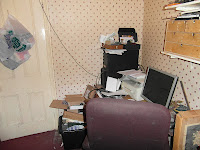 These two photographs show what passes as my current "work area", though to be honest the only use I've really put it to is computing and storage.
There really is not much to say about the photos really, but the left hand photo shows a huge piece (about eight foot long) of polystyrene above head height.  This was intended to be the Tartar wall in Peking (sic) circa 1900 for the boxer rebellion - another project, started but never finished (one day though it will be - "Honest Injun Guv").  Top right of the same photo you can just see one of three pirate ships I scratch built, each about two foot in length, yet another unfinished project, but one day... 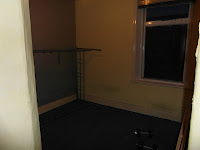 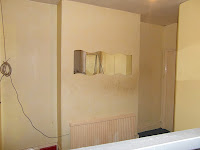 These next two photos show my old wargames room, taken from me in my prime (my children seemingly needed somewhere to sleep too), but it has now been reclaimed.
Originally I had a folding table-tennis table (9 foot x 5 foot) in it, butted up against a wall, with just enough room to squeeze around it. My current plans for it are to have a more modest 8 foot  x 4 foot table (that's the size the sheets of wood come in that I'll be using). It's taking a long time to get organised because of health, money and time restraints, but the move from the "cupboard" to my new/old room is underway. Perhaps its just as well I'm a patient sort of guy. 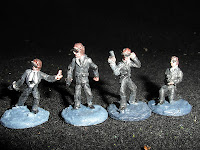 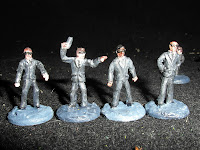 These two final photographs show the MegaMini figures from their set "The Bureau" that featured in last month's blog.
As I've mentioned on previous occasions, they may not be the best sculpts in the world, but their price is right .


As always, all comments are welcomed and appreciated and if you're a new follower and I haven't already welcomed you, then "Welcome"; I hope all of you, follower, lurker, or browser find something to entertain, amuse or interest you.
Posted by Zabadak at 06:55