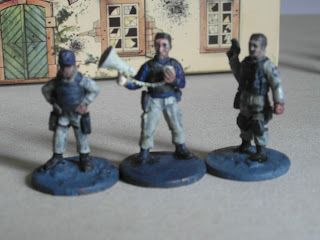 Finished at last, with only one disaster involving varnish; the photographs are of course up to my usual low standard !

All these figures are all from "Offensive Miniatures": http://www.offensiveminiatures.com/
from their "Near Future" range.  I can't really comment on the customer service as I bought them off e-bay (at half price).

The first Photo shows what I assume to be the Command Team (as they're not wearing helmets), but they are missing one other who appears in a later photo.

There are two packs available, both with eight SWAT guys , but should you buy "the deal" of both SWAT teams and the Terrorists (consisiting of 5 terrorists and 3 hostages) then you get an extra  two SWAT figures thrown in.

The chap I bought them from on e-bay had obviously done this, as I had the extra two figures when they arrived (plus an extra two terrorists!)

I would say that all but one of the terrorists in "the deal" are ideally suited as suvivors for a zombie campaign. 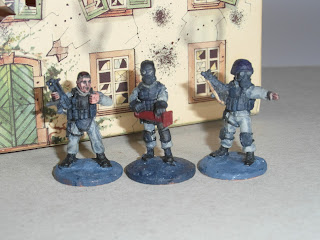 This  photograph shows another three members of the team, the middle guy holds the thing for bashing in doors (I haven't a clue what it's really called) and it's possible that the left most figure is one of the "freebies", but don't quote me on it.

From "Offensive Minis" web site the figures appear to be very diminuative, but this is an illusion caused, I suspect, from their fine sculpted proportions.  They really do fit in well with other miniiatures, from various manufacturers; on the web site gallery there is a comparison of figure sizes too.

All the figures in this set are armed identically, (for the most part) with a side-arm and what looks to me like an MP5, but I'm willing to stand corrected!

Some of the officer/negotiator types have only the sidearm, whilt the sniper has a sniper's rifle (surprisingly enough), though I couldn't possible  tell you what it would be, but I can tell that it's a sniper rifle because it has a telescopic sight !(The sum of my modern sniping knowledge has now been passed on).

As can been seen from the photgraphs, headgear is fairly varied; though the standard Kevlar helmet is much in evidence, there are also gas-masks and caps present, and the female observer is without headgear, as are one or two others.

There is a large amount of detail on the figures, which is great if you enjoy that sort of thing (I don't), but I refuse to even try to put the lettering of "POLICE" on the panel allowed for on the figures (approximately 4.5mm x 1.5mm), even "SWAT", attractive as it may seem with two less letters is well beyond my capabilities.  Should I ever get around to it, I may well copy "Lucky Joes" excellent SWAT teams and his use of transfer lettering, after all we can't all be Vampifan with his superhuman eyesight ! 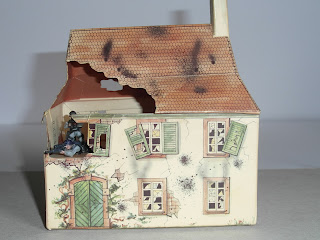 This photo shows the building I've used as a backdrop .

I've had this building for maybe 20 years now and I haven't a clue about where it came from, who  made it or anything else about it!

The building is made from very thin card and was probably assembled by me, (though I can't remember doing that either) and to the best of my memory I've  never used it on a wargames table 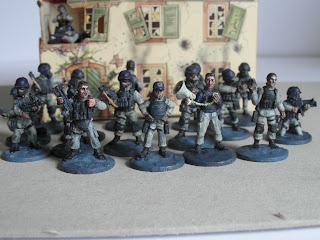 Finally a group shot of the whole ensemble.
I was initially undecided as to what colour scheme to go with; blue would clash with (though possibly also compliment) the police, ditto green and the army.  So I settled on this bluey, green grey, which coincidentally is the colour scheme used by the SWAT types on the TV program "Flashpoint"

"Offensive Minis" also do a great bunch of rioters and riot police too, available as two seperate deals or one big deal, with the added incentive of a free news crew (something I haven't got - yet), I'll have to wait a while to get those though as I'm not buying any more figures until my current lead mountain becomes a hillock !

That's all for now, comments, as always, are welcomed and appreciated.

If you're new to my blog and I haven't already welcomed you, then "Welcome".
Posted by Zabadak at 08:29