As reported by Brian (Vampifan) in his monthly musings last month, we did indeed meet up in Newcastle City Centre to spend a very pleasant lunch and tea, interspersed with some shopping. 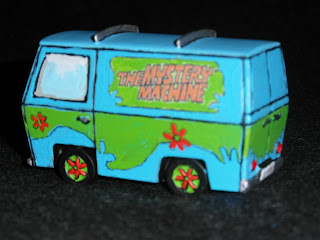 Much to my delight and embarrassment he gave me  a present of  a "mystery machine", a model from Armor Cast in the USA :
http://armorcast.com/store/product_info.php?products_id=1510

Its probably not to be confused to be confused with the "Mystery Machine" of a certain children's cartoon series as it's labelled "Clue Contraption Hippie Van".

The photographs really do not do it justice; it really is a superb model. 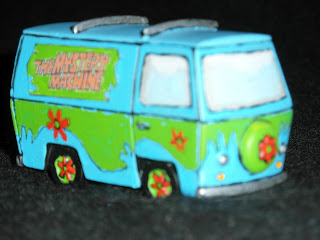 What is more remarkable about this gift and what left me truly gobsmacked, was that Bryan had also painted it for me.

Other than the two side panel signs which I believe were done by magic (or possibly photoshop) the rest is a Vampifan special paintjob!

Now all that remains to be done is to collect the "crew" for it and whad'ya know there is an all-ready- made gang available from "Hasselfree" :
http://www.hfminis.co.uk/shop?product=gang-and-dog~hfn016&category=miniatures~non%252dcoms-%26-civilians
Obviously this is not the gang from the cartoon series (for one thing, their names are different), but they'll obviously do the job.  Hasselfree are also in the process of duplicating the "Not the gang" figures as armed survivors of some horrific apocalypse or other. 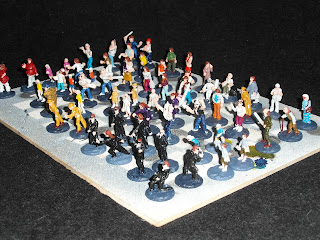 Just to show that I haven't been idle with my own painting, here is another attempt at the Lead Mountain. These are all "MegaMinis", mostly civilians, but there are some zombies amongst them - those civilians that have a "zombie double".
Probably most easily spotted are the two figures in red to the top left of the screen (even though the zombie one is slightly cut off. There are also a civilian delivery-type guy and his zombie duplicate to the front left of the mass - (they appear very yellow). 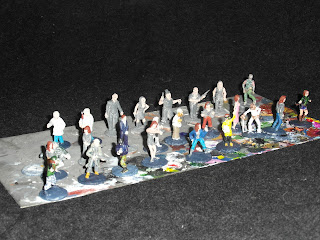 Also on my work-in-progress (sub-division painting section) are this little group of figures.

Amongst these figures are Hasselfree, Black Cat Bases, MegaMinis, Offensive Miniatures, Cold War and a plastic Zombie from you know who.

The eagle-eyed amongst you will also spot the five figures that make up the "Devils Rejects".


Again apologies for my lack of any but the basic photography skills; I was trying to show the compatability of "Offensive Miniatures" with other Manufacturers, but that can wait for another day.

That's it for this week, once I get this little lot finished off it'll be back to building offices, shops and homes for the zombie horde to destroy.


Thanks for taking a look, all comments are of course welcome and if I haven't already welcomed you to my blog-site  then "Welcome", stay a while and don't be shy, for as we say here in God's Country "Shy bairns get nowt !"
Posted by Zabadak at 10:17