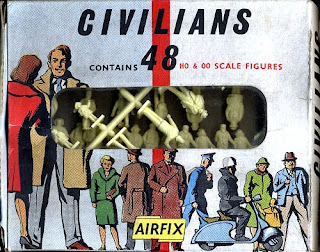 When I started wargaming some forty plus years ago, the only figures that I could afford were soft plastic ones, namely  "Airfix". They came in a box, normally of  "48 pieces" for what in current money would be about 7 1/2 p, with about 36  of the 48  pieces generally being usable, the  others less so. When a new box was released it was always a time for great excitement of course, from civilians to confederate infantry, Germans, Foreign Legion etc.  However, I think every Wargamers dream was to own metal "lead" figures, but they were (comparitvely speaking) very expensive.  There were few suppliers and virtually no shops supplying them, outside of London and for those in the provinces (me) it was a very difficult task indeed to obtain them.  The "obstacles" of course were eventually surmounted and purchases of Hinchcliffe figures and Miniature Figurines  were eventually made.
It was a slow and expensive business building up a wargames army in lead.

Nowadays though we seem to have reverted to some form of inverted snobbery, where we're being brain-washed into believing that plastic figures (be they the new "hard" plastic rather than the soft polyethylene Airfix type) are superior in some way to lead miniatures.  My firm belief is that the only reason the "major" players in the figure manufacturing business have taken the step down the plastic path is money.  I haven't got a problem with firms making money, after all, it's what they are in business for, but when 5 plastic figures could knock me back £25 I draw the line. 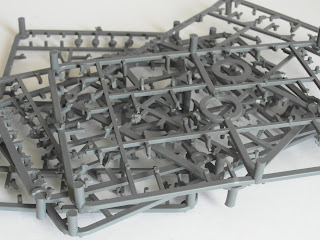 There are plastic figures on the market that are excellent and fairly reasonably priced too, but equally there are many, many ranges of figures produced in lead/white metal that are on a par for cost per figure.

Oversized plastic figures, which tend to be mainly, but not exclusively,  in the fantasy market have great detail on them, making them easier to paint - which is hardly surprising though when a shoulder strap 1 mm thick is possibly up to 2 inches thick in scale !  This in itself would warrant another rant, but it is another feature of the plastic market, that finer details cannot always be had the way they can on a metal figure and detail comes at a price.

The photo above  shows the "waste" from a few sprues of plastic figures (6 figures to a sprue and assemble them yourself), I really can't imagine the same waste from metal figures not being re-used.

In case you're wondering, yes I do have plastic figures of the modern "hard" plastic variety but I haven't come across anyone that prefers them to an equally sized metal figure.  Randomly looking through the interweb I came across 16 plastic men-at-arms for £20 or £1.25 a figure, which seems fairly reasonable (if you're prepared to put up with the bunches of bananas they have for hands) and a similar pack of 30 figures in metal for £24 or £0.80 per figure !

Plastics are not always cheaper - its a Big Con ! 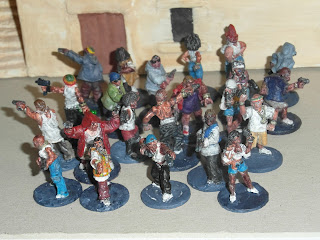 For some reason (probably my ineptitude) last week's blog was missing the group shot that I took of my entire Gangstas collection., so here they are.

The basing "problem" has still yet to be resolved, but I'm getting there - you'll no doubt have noticed that my photography skills are still pretty dismal.

The building in the background is basically a large length of thin card wrapped around a polystyrene block and was used in many Indian Mutiny games, though it wouldn't look out of place in New Mexico, Spain or the Middle East either.


Next week's blog should feature my "Offensive Miniatures" SWAT figures as there are only a few minor details to finish off (barring any catastrophes with varnish, as happened with the Gangstas !).

Thanks for looking and all comments, are of course appreciated and if I haven't already welcomed you to my site "Welcome", I hope you find something of interest here.
Posted by Zabadak at 08:39