First off, let me say that I will try and update this site's links etc. as  and when I can, but there are just too many demands upon one's time, as I'm sure many of you will empathise with, real-life has a way of interfering with our hobby big-time ! 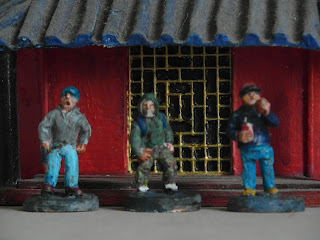 First off are three of my twelve civilians from Warm Acre Miniatures, although I bought them off e-bay at about half price !

Perhaps not too noticeable in the photograph is that the guy on the left has actually got a weapon, in the form of a baseball bat and even though the hooligan in the middle has a spray can, I can't see it being much use against zombies in the coming apocalypse.

The guy on the right is armed with a tinny and a burger  ! 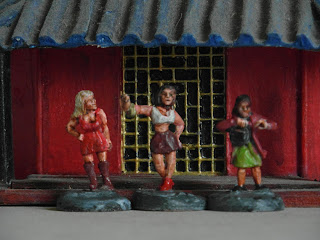 Next up are three more from the set whom I have labelled as "The Good, the Bad and the Ugly", although you'll have to make up your mind as to which is which.

I've  attempted to paint up all these figures as being from the seedier, seamy side of town.

As stated above only one figure in the entire set has anything resembling a weapon, hence these are "Civilians" rather than "Survivors", although "cannon-fodder" or "vicitms" may seem more appropriate 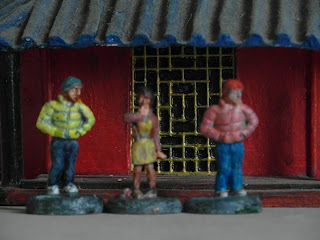 Here's the "puffa-jacket" twins and another female; it is not a very well known fact that people "and miniatures" in such attire always appear slightly out of focus.

One of the features of the Warm-Acre miniatures is their "double" bases, which I was completely unsure about and so I scrapped the plastic bit and replaced it with a penny.  I'm pleased to say that you can hardly see the join on most of them. 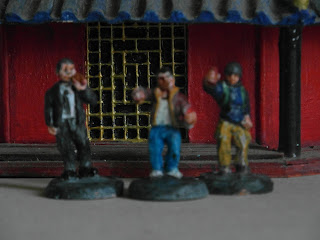 The final three in the set; the chap on the left could easily be mistaken for a "suit" except that he's not obviously armed, unless you count his hot-dog!

The bruiser in the middle has actually got his right hand in a fist, but is also suffering form the effects of having seen too many puffa jackets.  He should really have "H.A.T.E" tattooed on his fingers but I'll justimagine that they're there.   The lad on the right is obviouisly up to no good, as he has a hoody and a backpack ! (Whadya mean typecast ?) 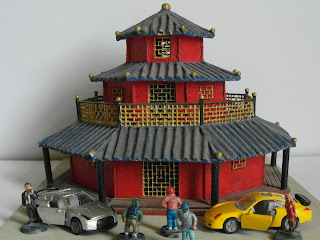 Just in case anyone was wondering what structure all the figures were standing in front of, here's a snap that should explain all.

I build this models probably about ten ago for a friend's Chinese Opium wars scenario and I kept it to use in my Boxer rebellion games.

It was made from thick cardboard, dowel and what I know as plastic canvas (doors, windows, decorations and balcony rail) 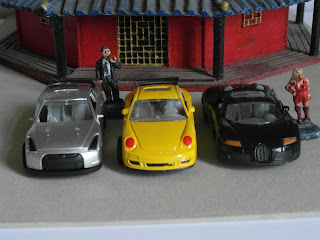 The vehicles are sports cars that I picked up a while ago from (you've guessed it) Poundland !

At first I thought they looked a little on the small side, but I decided I'd go with them anyway.

I don't think that they look that bad really, considering that the figures are on thicker than normal bases (my normal).  The door open on them and they vary between left and right hand drives.  I'm not too keen on the red  head-lights though, I can see those being painted out at some future date.


If I haven't already welcomed you to my site, then "Welcome",  I hope you'll find something here to enjoy.
Posted by Zabadak at 09:00