First off, let me say that it has been quite remiss of me not keeping the appearance of my board up to date so to speak.  After the initial design template and the addition of  a couple of pages of my views on things I never really returned to "update" it.   Well I've made a start, I've added more links to my favourite links side-bar and there are still more to add. I've also updated my to view list of films - I didn't realise just how many I've yet to look at, but that's a problem we've probably all got, there not being enough hours in the day to do all we want.

This last week I've been very self-disciplined and put aside at least an hour each day to do some figure painting.  I didn't manage to finish all the figures that I started, as I've still got the final finishing touches to a dozen Warm Acre Civilians.  I have managed to finish ten Foundry figures though, five "Suits" and five Militia.  The latter  will probably be joining  my other five militia types (also Foundry) to be a "gang" of modern-day survivalists and will probably centre around a gun-shop, if I ever get round to making one ! 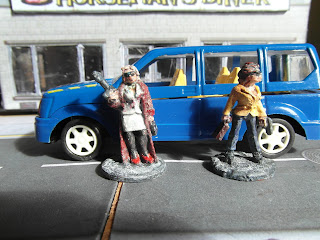 Shown here are the two women from the Wargames Foundry set Sergeis Korporation.

The vehicle behind them is one of my recent purchase from Poundland, note the great split down the side of it (easily fixed), air conditioning at its worst !

The "Suits" will be used in whatever capacity I need, whether it's as  Detectives, Corporation Execs, Mobsters or whatever. 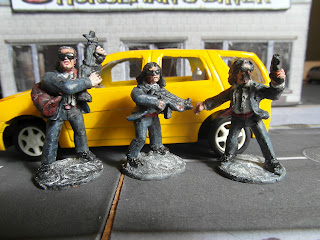 The photgraph on the right shows the remaining three figures from the above set, with the obligatory giant figure.

As I mentioned in my previous blog, I'm still not happy with the bases, but it's on the list of  things that need doing.

The vehicle is another Poundland special.

The vehicles did look very large in the shop, but they're OK up against the figures. 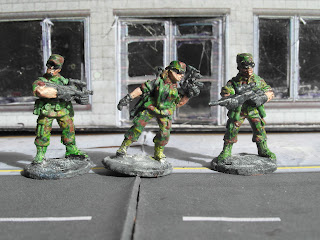 These three are from the Wargames Foundry set Backstreet Militia and will be joining up with the set Mercenary Fire Team, giving them huge  amounts of firepower.

I've attempted to paint them in what I think is a British Summer Camo though I doubt it's the current one being used as I copied it from a friend's fatigues! 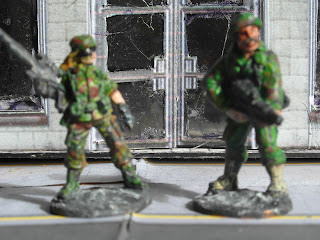 Last two of the Milita and as always my camera-work goes a little astray.  I've found what is called a Macro button and you know what they say, "A little knowledge...etc."

More reading of the blessed Camera Manual is in order (must find out what the little dial, with all the small lettering, on the top does). 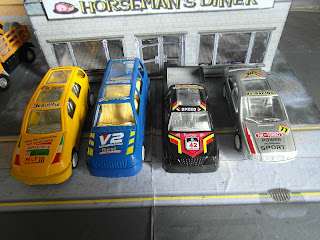 Here is a shot of my four most recent purchases from Poundland en masse.

I'm not a great fan of all the "Stickers", (transfers ? decals ?) on them and will probably remove them in due course.  The stickers are not apparent in the photos above, but as we view our games from above most of the time I think they'll stick out like a sore thumb. 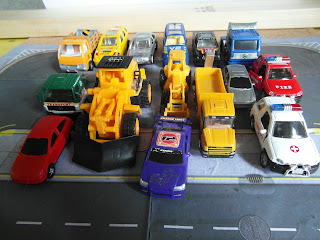 Final photo of all my recent finds and purchases from the last month.

The majority came from Poundland (of course), but not all of them.

I think the most expensive was less the £2.50 and several of the least expensive were 10p (car-boot/tabletop sale).


Finally, comments are always welcome and if I haven't already welcomed you "Welcome !"
Posted by Zabadak at 09:05