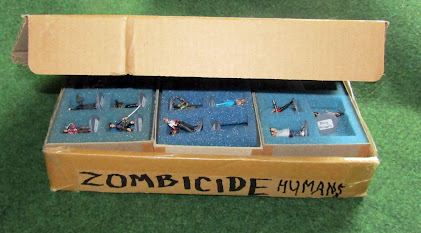 Another box of Bryan's (Vampifan's) figures had the correct labellling, inside was a collection of painted and named figures, that I believe are from the board game Zombicide. They were loose in the box, but I've put them into foam, gleaned from many of the empty Star Wars (and other) boxes. I suspect that they're not varnished either and required a bit of protection imho. Once more these are some of Bryans best work that I've seen.
Here's the photographs:
I mentioned previously that the figures have names on their bases, there were two pairs of figures that looked identical and had identical names. Why ? I haven't a clue...
I know next to nothing about Zombcide, save that it was very popular  when it first came out. The well -proportioned and sculpted figures were (imho) a boost to the games popularity.
That's all I've got for this week, the tenth annivesary of my blog. Next week, sadly,  I'm away at a funeral in the deep south, but I will try and prepare a blog before then, to be posted the day before the funeral.
In other news, I've still not attempted any hobby work of my own, my painting area and gaming table are still  a mess with little enthusiasm on my part to do anything about it.
I did intend to stop posting my blog about now, but will continue to post about many of the rescued items I have from Bryan's collection and, in time, what I intend to do with them all.
I've managed to catch up on my commenting on others' blogs after some difficulty with blogger not putting up my reading list for a few days , but it seems to be fixed now.
That's it then for this week, thanks for taking the time to visit and as ever your comments are both welcomed and truly appreciated.