As I hadn't got anything got prepared for this week's post, having only just got back from my all too brief recent holiday, I dug out one of the boxes I 'rescued' from the late, great Bryan Scott's collection.
As was all too frequent in Bryan's labelling what was in the box was not always what was on the label! 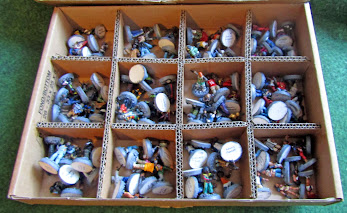 I was pleasntly surprised to see that this was not the case with this particular box as the box contained just over a hundred 'gangsta' types (btw I hate the term 'gangstas') , They're from a mixture of manufacturers some I don;t recognise, but a lot that I do - Bobby Jacksons gangsters, probably from Black Cat (when they did sell them), a lot of Foundry Streetfighters and maybe one or two Hasslefree types with possibly some Reaper minis too. I was surprised to see so many, though I did know Bryan had all the Bobby Jackson figures.
Here's the photos of the contents:
That's some collection, ideal for drug wars or similar and whilst I have quite a few of these, I've nowhere near the numbers Bryan accumulated.

In the last few days of my holiday I gm's a rpg game called Og and great hilarity ensued as played had a very limited vocabulary for their cavemen (and women). I also played in a DnD adventure, playing as a Paladin - probably the hardest character I've ever played , but great fun and nostalgia.

Additional boardgames played were "Witches" and "Alchemists" that I didn't take part in (limited numbers), Fire Point (again) plus some of the other games were re-visited - a thouroughly enjoyable holiday.

Hopefully I've also managed to get up to date with all my commenting  too, after being a bit lazy in this respect.

That's it then for another week, thanks for taking the time to visit, hopefully there was something here of interest, next week I'll be posting more figures from Bryan's colection - Zombicide humans !

As always your comments are both welcomed and truly appreciated.