More Westerners and Others

If you're a follower of this blog, you will be aware of my dearth of females in my collection, this however has been somewhat rectified with an ordr of figures placed with Steve Weston's  Toy Soldier online store.
I found a few more females to add to my meagre numbers, plus a few of their more 'intersting' civilians. 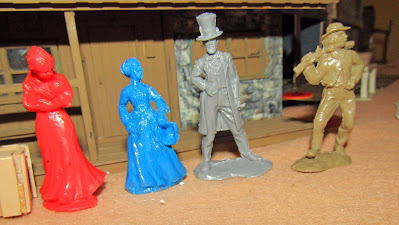 [Here's good ol' Abe, two ladies and a trapper type]
The figures are all 1/32nd scale and fit welll with my mainly Timpo collection. 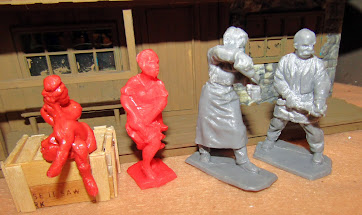 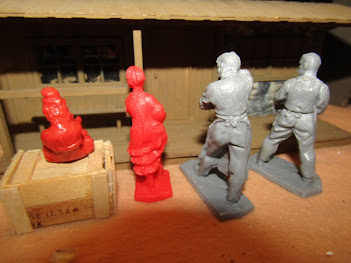 [Obligatory rear view, for those that like this sort of thing - you know who you are!] 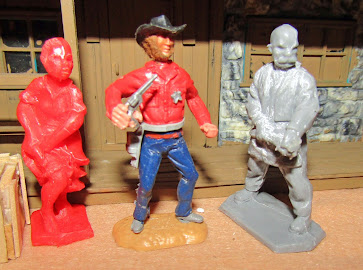 [Timpo with the figures shown for scale] 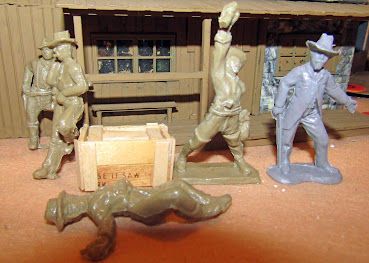 [Drinkers, as the listing says - drunkards maroe-like imho]
From a medieval set, (Robin Hood and co.) I got these two excellentcharacters, a Barkeep and a Tavern 'wench'. These willconvert tothe 19th century with little effort. 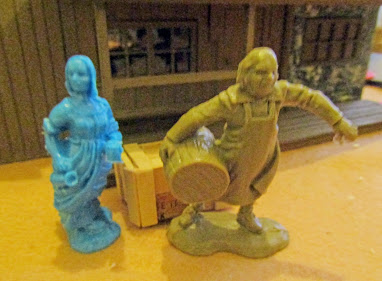 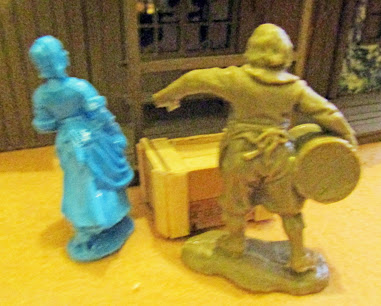 [Rear view -(bit obvious- Ed.)]
sorry aboout thefollowingpitures, theplastic figures are a very  bright whte, and despite my limited photograph manipulatiing skills I was unable to get any reasonable photos  of them, They are Mexican peasant, eight figures in the set and I have six sets of them- all for £10 in a deal of some sort !.(That's about 21p a figure!)

[Two wounded figures (or drunks?) and the all important female!] 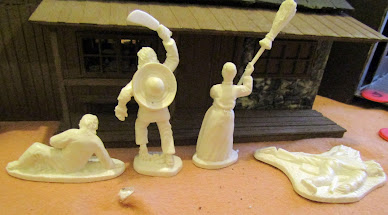 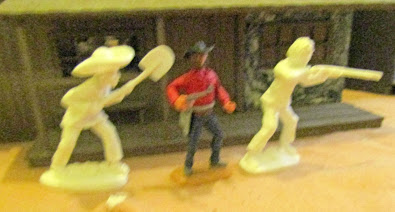 [Another size comparison photo]
I do have plans for the peasants, who will mostly beconverted to something, imo tht will bealittle more useful !
In addition to these I got some horns for my few Britains cows ( their bells don't work) to convert to longhorns, they'll require a little surgery in the rudder region. 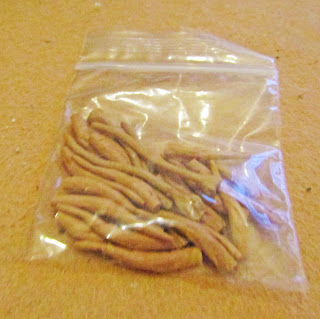 [Horns (padding photo - Ed.)]
The final photos show what is an excepitonal chunk of resin, sutitable for any period after the Napoleonic Wrs to the presentday and should be an immediate purchase for anyone using 54mm figures. 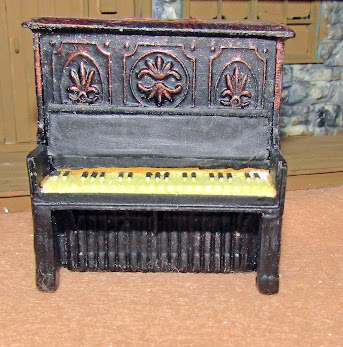 Yes, it's an upright pian and it's in resin, but (and it's a big but) it came ready painted as above andall for a measily £3.50 !!!!. I can't recollect seeing anythiingclose to this value for money in any resin kits I've seen.

[Here's a omparison photo of my own scracth-built plasticacrd piano and the resin one]
So that's it for this week, some more recent, chance purchases, will be the subject of next week's blog, but that's it then for this week.
Thanks for taking the time to visit and as always your comments are both welcomed andtruly appreciated.
Posted by Zabadak at 05:39