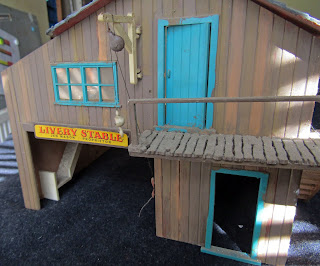 Having shown these buildings fleetingly a few posts ago, here they are in a little more detail.
The first up it the Livery Stable on the right, built from two "Britains" models to make the building a little larger; I merely added the two extra side walls and used half of the front insode the building to make another room.
Only one of the four roof pieces were present, but no doubt they'll be somewhere amongst the many other places my western stuff is stored.
The building is identical to the Britains' farmyard barn model (like a couple of others iirc).
Next up is yet another, Britains' building, namely their Saloon, namely "the Silver Dollar". Scratch built upper floor and internals.


The final building I  retrieved from the loft is the Sherrif's cabin, much distressed from its long-term storage, but it is a snap-fit building and probably a Britains building, but may well be Timpo (it looks so cheap). As far as I can tell it's complete too !
This buildings seems to have been used as storage for multiple bits from other buildings as removing the roof showed :
Sorting through the contents revealed :
Every figure in town had to had somewhere to sleep, hence the amount of beds - just in case you were wondering ! These three buildings are typical of my mixed collection, I noticed at least two more whilst in the loft (one a part of a building I didn't recognise). I think I have at least another half a doze, a cantina, a hotel, the marshal's office and city jail, a bank and possibly another saloon that I can remember.

In the last week I haven't done a single thing hobby-related, no rules read, no internet research or searches, definitely no painting other than doing this post and storing my Zouaves, bothe of which were the first things I've done snce finishing my post last week. I doubt that comments on various  blogs and replying to comments on my own count !
I think I've found Frank's black hole !

Thanks for taking the time to visit, apologies for the miserable content, but as usual, your comments are still welcomed and appreciated.
﻿﻿
Posted by Zabadak at 05:33