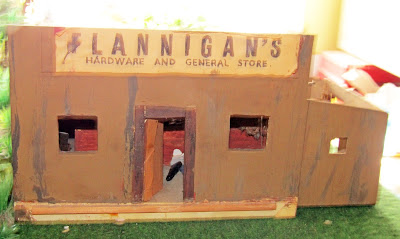 Having not managed to finish anything this last week (I only managed about four hours painting on my Zouaves) I've reverted to posting another in my 'Abandoned buildings" posts.
This time, I've once again fallen back on my 54mm western buildings, all built sometime in the late 60's  and early seventies.
"Flanagan's" was a general store and the first model I'd built for the my western games and the first to see action.

﻿  This and many other of my western models was built from thick plasticard. - their original purpose was as "Bingo boards", but were much cheaper than modelling plasticard sheets.
The shelves were mostly barren, but a few pieces from 'Timpo', 'Scalextrix' and some scratch-built items were present.
Probably not my finest work, but I was only 17 or so when this was built.
It was names "Flanagan's" as this was a freebie sign in the skirmish rules I played at the time.

﻿﻿﻿
﻿ I didn't just scratch-build models, I also bought what few "Britains" models that could be found (Britains wild west range was, at the time, rapidly declining) and added interiors to them too.
The following model had it roots in Britains' "Silver Dollar Saloon" and you may notice the attachment for the bat-wing doors still present !
﻿ Having risked life and limb getting these two models, I tried to find the exact date when I played with Flanagan's at the Wargames group I started in 1970,  but alas the records didn't help.
The habit of recording every meeting's attendance and game sadly went into disuse less than a year after the group started.
That's it then for another week, though I doubt this post would have happened had not my daughter returned my ladder yesterday ! Goodness only knows what I could have posted about !

Thanks for taking the time to visit, as always your comments are welcomed and truly appreciated.

(On a side note 'Explorer' highlights spelling errors - score! I'm also desperately trying to keep up with the blogs I comment on, so apologies if I miss any!)
﻿﻿﻿﻿﻿﻿﻿
Posted by Zabadak at 06:22