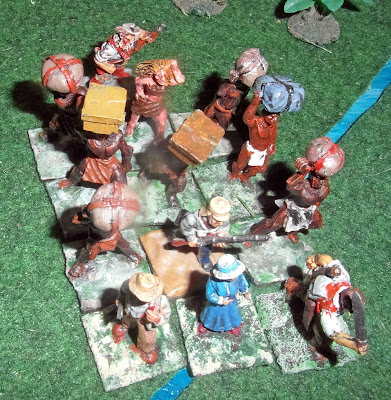 As an experiment I decided to try out a slightly different experiment in Jimland, givng the chance of for an expedition tohave a specific task, I have several of these in mind as "quests or jobs", imagining them to be on a notice board for adventurers to take up (or not) with a specific reward in mind - a bit like side-quests in a lot of computer rpgs.
The objective of this game was therefore to explore a specific area of seven hexes, two days' march from Jim's landing, to see if there were any survivours of the second Molyneux Expedition.
Once in the designated area, the rescuers had two chances of finding any survivours each time they explored a designated hex. If there was a village there then that would be a success (a 1 in 6 chance) and if there was a hostile encounter with Slavers then this would automatically be a success, as it was slavers that did for the Molyneux Expedition.  This however didn't mean automatically that there were any survivours as I assumed that a slaver would have tried to revive the three fallen adventurers (with a chance of 11/20), but ONLY after they had defeated any hostiles.

So once more, :
From the Journal of Frederick Cartington

"Even as the news of the Molneux Expedition's disater was filtering through camp, the Royal British Museum's expedition had returned from their own exploits. Immediately upon hearing the news and despite my own and others' protestations (and his own grief at the loss of his wife's life) with a day or two, Angus McDoughty had set out on a "rescue" mission taking along his erstwhile sister in law (again, against the advice of many). [The expedition is shown above - Ed.].
On their return a mere week later I gleaned what had happened, once more from one of the soldiers present."
"Over the next three days Anne (Johnstone)  managed to save the lives of two of our bearers; one from  a spider bite and another after swalllowing large amounts of dirt from his encounter with quicksand. - not bad for a "Midwife"."
"On day five we encountered Slavers ...
"With their casualties mounting and our position seemingly unassailable,n the Slavers left the area. We quickly looked for their camp and found two Europeas still barely alive,  one a Doctor Minden, the other an Interpreter named Hubert. (as an aside - I'd met both of these on  a oevious occassion.)
"The two day return journey home saw three of our bearers lose their lives and full packs of foood, whilst crossing a rapid moving stream, but the very next day we arrived back at Jim's Landing ".
There had been no sign of George Molyneux with the Slavers, but he had been thought by Doctor Minden to have been mortally wounded"

With the small force available and the large area to be searched I didn't think that there was much chance of success, but it turned out to be a great game. "K",  my friend lead the rescue attempt with his usual bravado and although successful still managed to lose a woman from the party!
(He must have enjoyed the game as he's asked for a cop of the rules, the mastermap and we've since had another game !)
As reward, in keeping with the usal 'Jimland' reward system (a fixed amount and a random amount) I had to think on the fly for a suitable reward. I settled on the 'value' of the Explorers rescued (their points value) plus 1D20  each. So although few points had been scored for explorartion more than a hundred was scored for the two explorers - a success imho.

In other news:
My Egyptians have all been packed away in bubble wrap and stored (still needing varnishing) and despite another hospital visit (routine and boring) I'm painting another six explorers for Jimland !
In addition, as mentioned above,  I've managed yet another adventure into the wilds of Jimland with "K" - a very enjoyable game.

That's it then for this week, thanks for taking the time to visit , hopefully there was something here of interest and as always your comments are both welcomed and appreciated.