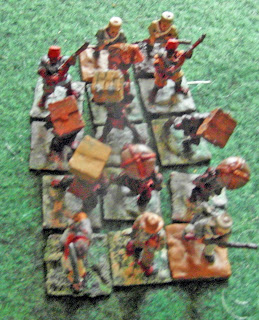 Earlier this month saw the last expedition of my Friend "K's" last expedition into Jimland, probabl for some time. (you know why).
Sorry about the inevitable, obligatory blurry , photograph on the right showing his expedition in all its glory !
Undetered by his poor showing in his last two expeditions, he was keen on testing himself once more in Jimland.
The Expedition consisted of just the two surviving Explorers from the previous expedition, but included a good number of soldiers and Askari to boost firepower and ten bearers (all carrying food of course).

From the Journal of Fredercik Cartington at Jim's landing,

"The Royal British Museum of Archaeology Expedition's"
leader Angus McDoughty led yet another expedition into Jimland despite being low on numbers and the recent loss of both his wife and sister in law.
"I was of a mind that I wouldn;t be seeing him or his scout Raymond Grylls ever again"
"Here though, is their exploits as related to me by one of the survivours"

"By day three we were reduced to six bearers, thanks to them being scared off by native drums in the night, but still plenty of food was available. It did seem that no matter the problems the terrain threw at us, whether mountains or swamp  Ray, our scout never failed to find a way through. perhaps our luck was chnaging for the good.
"Near the end of the first week though, once more a solitary female emerged from where she had been hiding in the mountaiss.
"I just knew that this spelled doom for the expedition, give Angus' recent record with women.
Our expedition's size was further increased as a soldier also joined us and he had a gun !
"Our luck seemed to have changed as we entered yet more mountains and a way out coudn't be found. Our food, started to cause conern, but due to the discovery of edible rations being found, our hoped were lifted, soon afterwards of course, they were dashed once more by the food turning out to be unedible.
"All our endeavours to survive came to a climax as we were ambushed in a swamp midway through the second week.
"With the ambushing Natives seen off, we set off once more Jim's Landing and safety, arrving there with grumbling stomachs and no rations."
"Strangely Angus was in good spirits and looking forward to his next expedition."

"I found out later that the women was Freya Johnsdotter, a huntress who willingly joined Angus' expedition"
F. Cartington.

It was a strange game, lasted a mere hour or so as the expedition hit bad terrain and managed to get out, the Natives and Tribals encountered were either Neutral or friendly, food was either abundant or in short supply, but the whole expedition  (save for a single soldier) survived !
"K" had followed my advice and headed North, avoiding crossing any river and following a river that was already known of.  His point score was well over $300, which considering his relatively short expedition was exceptional.
Here's the map of his expedtion's journey:


In other News:
After this game I was wondering whether or not it was worth the effor of fighting in a swamp (from the natives' point of view and I'm now considering abandoning the idea as it makes little to no sense from the natives' pov, plus the fights are not that enjoyable as figures 'get stuck' half the time and movement is halfspeed when they can move !

Strangely this self-isolation thing hasn't had much effect on me, the major changes being I sadly no longer collect my granddaughter from school each day and neither do I go grocery shopping - which I did two or three times a week. It does mean though I have added to my painting sessions, now having two sessions a day each of about an hour or so. It's just as well, as painting the British for the Sudan is becoming tiresome and tedious, but I'm getting there!

The Great photo Mystery:
I had to dig out the explorers I'd recently finished, as I couldn't remeber one figure being particularly larger than the others. Of course he wasn't !  It's an illusion caused by the camerman getting used to the new camera . The photo has been foreshortened as can be seen by the sizes of their bases seemingly getting smaller.
(They're all 20mm square)

So the mystery is solved, the camera is probably too good at close range !

That's it then for this week, I'm going to try and finish the Brits and also have an expedition of my own (Von Sackville's) into Jimland over the next week, which should give me something to write about in the weeks to come.

Thanks for taking the time to visit and as always your comments are both welcomed and appreciated, but above all stay safe!

(I really still miss having a spellchecker on Blogger)