Another new Expedition into JImland 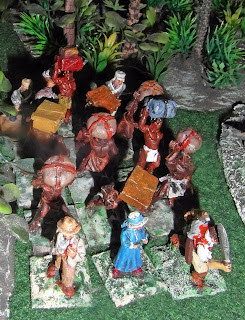 I welcomed another new victim guest to Jimland thi last month (and he must have gleaned some
enjoyment from the experiece as he returned for a second adventure last weekend).

Once more then, here is the story as recorded in the journal of Frederick Cartington:

"Shortly after George Molyneux left on his first expedition there arrived at Jim's Landing another expedition calliing itself "The Royal British Museum of Archaeology Expedition".
"Despite advice from many they immediately set off into the wilds of Jimland with one of their number's wives in tow"
"The latter left behing her sister who explained they were medically trained but should be referred to a 'midwives' for reasons of decorum (ahem)" 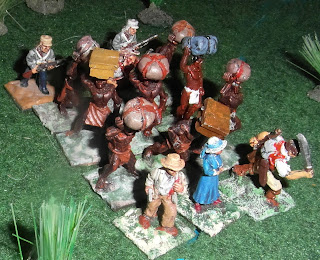 "The leader of the expedition, one Angus McDoughty, led his wife (the 'midwife') a scout by name Raymond Grylls and a hunter - Nathan  var der Holt."
"Two soldiers provided some security , who along with a mere ten bearers al lladen down with food, completed the complement of the expedition."
"Some two weeks or so later only four forlorn survivours of this expedition staggered back into Jim's landing. still led by Angus, with his Scout, Hunter and a weaponless Soldier bringing up the rear."
"They had the usual tales of losing bearers to windstorms, hailstones and bad food and all the usual encounters Jimland can inflict upon one."
" By day nine, they had no food and an extra mouth to feed as they had chanced upon a wild white female in rags wandering the jungle (one Aisline Monroe), who sadly died of starvation, the day before their arrival back in Jim' s Landing."
"Angus though, being a doughty Scott and hearing of the demise of the Molyneux expedition, determined to immediately to head out once more into the wilds in search of fellow explorers."

Thus ends the story of the RBMAE's first expedition, both myself and my friend "K" enjoyed the game and sat for a good hour afterwards talking of the action/adventure. It was unfortunate that just a week or so later (in real life) I lost my camera and all photographic evidence of the game. Before our recent game (yes,"K" had returned for another game !) we reconstructed the column as best we could, aided by the detailed expedition's turn records.
Here's the expedition's map:
In other News

I was very saddened to read of the very serious illness of a fellow blogger, my thoughts are with him.


In rather more pleasant news, my Egyptian infantry are now about 99% complete, requiring merely a flesh wash  to finish  them off !

Thanks for taking the time to visit, sorry for the rather brief post, but hopefully there was something of interest to be found therein.

That's it then for this week, as always your comments are  bthe welcomed and appreciated.

(Still missing the spell-checker)
Posted by Zabadak at 06:22