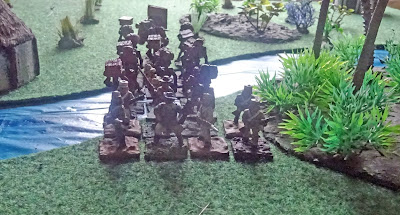 This week I'm continuing the story of Max's second adventure into Jimland, so once more:
From the Journal of Fredrick Cartington:
"Having survived two of the Pygmy darts,  Max was feeling emboldened, and the column, though our numbers were slightly weaker was still in good spirits as we faced yet another Native attack, in one of their unwelcoming villages. Max had foresaw their frontal attack would occur as we were crossing one of the many streams found in Jimland."
"The appearance of a Hippo joining the fray was a little disconcerting, but once our soldiers were clear of the creature Max, the Doc and myself made short shrift of it as a threat and it would also help our dwindling rations.
No less worrisome was a lioness appearing in our rear"
"Our bearers panicked at the sight of the lioness, some being stick in the small stream, but we formed a secure firing line, that would deal with this last threat.
With little incentive from ourselves the creature slinked away from our formidable force.
We were elated by our success at driving the natives away, losing only a single soldier in the melee, whom Doc could not save one of the two wounded, despite using medicines upon the fellow.
We feasted on the Hippopotamus that night  (tasted like chicken) and wondered what the morning would bring."

[As a side note: I've added the ability of an expedition to eat any prey they encounter and kill in their fights with the natives (provided they win of course). This seemed logical to me and is a very easy rule to implement and isn't a 'game-changer' in my opinion.]


"The next few days went without any incident of note though I did lose sight of the column at one point, being at the rear, but by nightfall I had found them once more.
We came across several groups of natives, but Horatio's continually improving language skills deflected any interest they may have had with us
Eventually following the coast we encountered the mouth of a river.  Max was delighted to have made such a valuable discovery and the objective of our expedition.
We made plans to follow the river as far as our supplies would allow and set of once more - very happy."
We followed the river for several days, though we had a slight halt as our bearers, on day. refused to move in the direction we desired "Bad Juju" they said.
I believe they were intent on not disappointing Max as when we eventually got gong once more we encountered a lake, thus ending any further river discovery.
Nearly three weeks into the expedition and on the return leg, through the never-ending grasslands failure in communications and no doubt Max's tiredness,, we failed to spot a a large group of Natives emerging from the long grasses."

"After a long drawn-out fight, the bayonet eventually proved its  superiority over a pointy stick, though one poor fellow succumbed to the spider.
With thinning numbers and supplies we determined to take the most direct route homeward arriving there safely despite meeting other disinterested natives and with no food supplies."
Max of course declared the expedition a huge success and immediately started making plans for the next!"

In gaming terms, the expedition had also been a great success, the Expedition had gleaned $449, a massive by my standards and enough to give every explorer a +1 in one of their skills or abilities.
From a person viewpoint, I enjoyed playing the game and quickly played another soon after; my rule changes had little effect of the overall feel of the game and my event cards came into play both aiding and hindering the party. Although it's permitted to leave wounded soldiers and askaris behind, I feel this is not in the spirit of the era and have always carried the ineffective "revived" figures and may write rules to reflect this.
With the rule changes and amendments it was obvious I needed a new playsheet and turn record, both of which have been done and were used in Max's third expedition - and may have to be amended again.
I'm still unsure how to write-these things up - I've tried a few different ways, but the adventure are all very 'samey' and very repetitive.

The expedition didn't cover a lot of new territory, but here's the map:
In other news:

I did some  serious slapping paint on miniatures this last week, and if (hopefully) finished by next week, I'll be posting the results. I've enjoyed the three adventures I played  (strangely enough) but editing the 100+ photographs into something worth seeing and compiling the aar is very time consuming as most of you will know!
I also bought some new figures (shock, horror!), but just the six, second hand and with varying degrees  of  'usability' (it's a word, right ?). All my 60p pocket-money went into them all. I'll  photograph and show the next week too !

That's it then, thanks for taking the time to visit and if you've found anything of interest, it's a bonus and as always, your comments, queries and brickbats are always welcomed and truly appreciated.