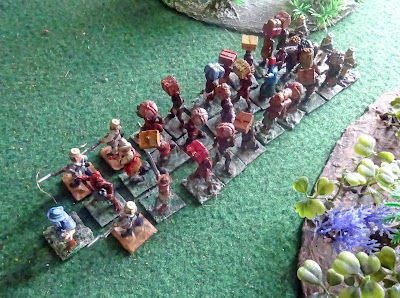 Even though my rule ideas and amendments are still on-going, I was so enthused by their effects on
the game that I had a second adventure the day after finishing the first. (I've since had a third too).
I added the additional thirty home-made event cards to the Events Deck (now at 160 cards !) and had adjusted the ammunition rules slightly. Max's first expedition had made a slight loss overall but there was still enough funding for a large  expedition column that included a pack animal, 19 day's worth of food and a medicine load.
So, reverting to my less formal presentation, once more :
From the Journal of Frederick Cartington:
"Once more we laid our trust in Maximilian as our Leader with the intention of heading west and South , then moving along the coast.
After an initial hiccup of  a bearer having a mild case of dysentery that was quickly dealt with by Doc Cleghorn we managed to arrive at the south coast. We encountered little to no trouble along the route, both natives and slavers along the route appearing disinterested with our presence, thanks to the continuing improvement of our interpreter's skills in dealing with such incidents.
On reaching the south coast though we first encountered  Tribals that were disinterested in our presence but the very next day a similar group of Natives took hostile action against us"
"After an intense, bloody, brief action the natives soon had enough and drifted away from the conflict back from whence they came. Thankfully only a single casualty was inflicted upon our comrades and once more we dusted ourselves down and made camp, reading ourselves from a trip along the coast."
"A pleasant enough couple of day's ensued as we found some hidden treasure, but its discovery seemed to have incurred the wrath of a party of seven pygmies all of whom had their very deadly blowpipes. Though short-ranged, the poison-tipped darts of their blow-pipes were irksome ""Luckily once more we were forewarned of their attack by the scouting skill of our leader and were prepared for their attack"
"The Pygmies, though bravely facing our guns and bayonets, were not match for our tenacity and were consequently quickly dispatched. Max's tactic of charging the enemy seemed to be very effective"
A lightning strike, the very next day, caused some consternation, but even the taking of the lives of three of our bearers, it didn't dampen our spirits"
Still in dense jungle, the next day was quiet, probably too quiet as once more we were set upon by a large group of Natives armed with rifles and spears"

I'm going to leave the expedition's story at this point, there is still a lot of story to tell, but it is a long story with at least as many photographs - and they do say to leave your audiences wanting more.

That''s then for another week, hopefully there was something of interest; of course, if you have any questions about the game rules or anything else, all comments and queries are always welcomed and appreciated.
Posted by Zabadak at 08:17